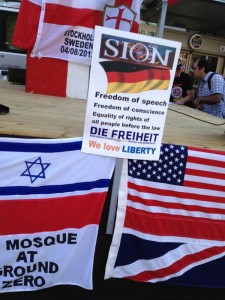 Finally after over a decade of speaking against the the threat of Islam, history has been made. As Pamela Geller and Robert Spencer of Stop the Islamization of America (SIOA), the EDL’s Tommy Robinson and Kevin Carroll, Stop the Islamisation of Europe’s (SIOE) Andres Gravers and hundreds of other freedom-fighters locked arms in a sign of unity against the worldwide Sharia campaign that is taking place. The unifying event took place in Stockholm Sweden. One of the main battlegrounds in the war with Islam. Unfortunately the event was attacked by far-leftists just like in June of 2011, when Mr. Spencer spoke in Stuttgart Germany. Not only do these far-leftists lack the courage to stand up against Sharia Law, they are so self centered that they will not even fight it for the sake of their future generations. Now that is just sad, and Muslims exploit that weakness on a daily basis!

To the event we go….

THE WAR FOR FREEDOM ON THE STREETS OF STOCKHOLM 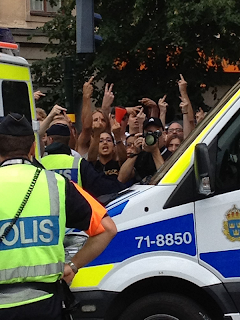 Today heralded the dawning of a new era of cooperation between pro-freedom groups in Europe, the United States, Australia and elsewhere. Freedom fighters from around the world converged in Stockholm to stand with one voice against oppression, tyranny and fascism. And the fascist thugs were out in force: police at one point found a suspicious package from the Leftists, and examined it out of concern that it was a bomb. It turned out to be a large firecracker, but clearly the Left-fascist who left it wanted police to think it was a bomb, and to create an atmosphere of menace and terror so that people would be too frightened to attend our event. Swedish police in riot gear cordoned off the area of our rally on both sides, and blocked entrance to it with police vans. But while the Leftist media, which swarmed around our event like jackals, will tell you that we are the threat, the police had to face violence only from the Leftist protesters. Desperate that our message of freedom not be heard, they blew vuvuzelas, screamed bloody murder, chanted “EDL go to hell” and kept up a constant din — while throwing eggs and firecrackers at the police and at any pro-freedom activist who got too close to them. One firecracker exploded in a policeman’s face; he had to be taken away in an ambulance.
Nonetheless, several hundred people braved the Leftist thugs and the police barricades, and joined us, unbowed and resolutely determined to stand for freedom and truth. When Robert Spencer and I got out of the car, the crowd started applauding, and so many people came up to us to express their gratitude for our work — it was humbling and gratifying. The enemedia was out in force as well, taking hundreds and hundreds of pictures of us, no doubt in an attempt to find the very worst shots, and inundating Robert and me with interview questions attempting to smear us as racists and inciting to murder. But it was noteworthy in itself that the media was there at all: in Europe this was a huge story (even Turkish media was there), while in the U.S. the media seems determined to ignore the issue of Islamic supremacist encroachment upon our freedoms.
There was a series of speakers from around the world. I explained to the freedom fighters who came to hear us speak that the battle is for individual rights. It is not a religious war, it is a fight for the smallest minority in the world, the individual, and we are fighting for what is good and what is right. We are right, they are wrong, and wrong is evil and anti-life. After I kicked off the event and Robert spoke (“Tolerance of the intolerant is suicidal”), Tommy Robinson gave a rousing speech on our need to defend free societies. He was then followed by representatives of Defense Leagues from all over Europe, as well as from the Q Society in Australia, and Paul Weston of the British Freedom Party. In the crowd were people from across Europe and the world — including a freedom-lover who attended our Jessica Mokdad Conference on Honor Killing in Dearborn in April, and who came to Stockholm from Poland for this event, and a hearty group of ex-Muslims from Iran who told me that a huge number of people in Iran are fed up with the Islamic Republic and Islam in general — but Barack Obama let them down in 2009.

All in all, today was a key turning point in this ugly and vicious war in which we find ourselves engaged. Once again the Leftist goons showed their true face, as did we. We will not be intimidated and we will stand for freedom no matter what. We made great strides in forging a true and lasting transatlantic (and transpacific as well) counter-jihad alliance. This is just the beginning. 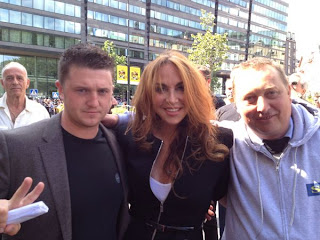 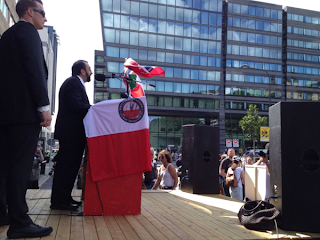 For more pictures from the event head over to ATLAS.

Europe: The Rise of the Anti-Islam Campaign!

Europe: The Rise of the Anti-Islam Campaign! Part II

Rise of the Anti-Islam Campaign III ~ We STOP Mosques and we WIN! ~ Video

38 comments for “The Anti-Islam Campaign Locks Arms Across the Pond!”