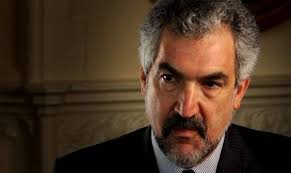 In an effort to do what is right, for years I have went against the grain and proudly spoken out against those who are $elling America the feel good fantasy, “moderate” Muslims are going to save the day. One of the main culprits of this message is self-proclaimed “historian” and “specialist on Islamism”, Daniel Pipes. 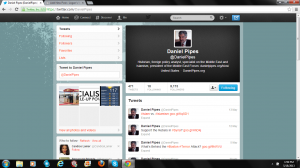 Just last week he penned an article entitled, “What you need to know about Islam vs. Islamism”. The article was posted on the FOX News website. While he did not specifically mention me by name, (it is probably safe to say that he does not care for me too much at this point, so why give me any publicity?) he did screw up by using one of the talking points I have been hitting him with since last year. Finally the pressure has gotten to him and he has responded.

Their killer question is, “Was Muhammad a Muslim or an Islamist?”

Yes, he was a Muslim. That is my point, and the reason I say he screwed up is because he ended up admitting I am correct. That Mohammad the war-monger was a Muslim.

Muhammad was a plain Muslim, not an Islamist, for the latter concept dates back only to the 1920s. And no, we are not cowardly but offer our true analysis.

So the definition of the word Muslim has changed over time? Says who Daniel?

Not only was Mohammad a Muslim, he was a self-proclaimed terrorist.

Which makes Islam itself the problem. Thanks Daniel!

Unfortunately, from that admission, Pipes went back to being…….well, Pipes.

Despite this urge, Islamists absorb Western influences, including the concept of ideology. Indeed, Islamism represents the transformation of Islamic faith into a political ideology.

As seen by that statement, Pipes shows just how ignorant he is on Islam itself. Because the Koran is what made Islam a political ideology. It contains its own set of laws. Such as the non-Muslim tax, otherwise known as jizya.

Another law being the punish for theft:

If Pipes actually did read a Koran, I say he is due for a refresher course!

Our killer question is “How do you propose to defeat Islamism?” Those who make all Islam their enemy not only succumb to a simplistic and essentialist illusion but they lack any mechanism to defeat it.

Actually that is not a killer question, it is a killer cop out. Pipes is the one using the term “Islamism”, so he needs to be a leader and tell us how it will happen. Obviously, Pipes is the one with no real long term answers. On the other hand, we here at Logan’s Warning/North American Infidels (NAI) are calling for America to become energy independent, and end all Muslim immigration.

This is very simple Daniel, Islam is the problem, it has been for 1400 years.  But wanna-be elitists like DP like to put everything into 500 shades of grey. It makes them feel smart.

We who focus on Islamism see World War II and the Cold War as models for subduing the third totalitarianism. We understand that radical Islam is the problem and moderate Islam is the solution.

The only problem with his statement is that he has been pushing that same failed message since at least 2004.

His message is one of complete failure though. As facts show us that Sharia is clearly seeping into America, and entire neighborhoods are changing to suit Islam. Obviously what he is $elling keeps the ideology of the enemy alive in our great country. So other than Pipes’ overblown ego and inability to admit failure, why should we continue with failed policies? Why should we gamble away our country on his detrimental message? What is his backup plan?  Does he even have one?

We work with anti-Islamist Muslims to vanquish a common scourge. We will triumph over this new variant of barbarism so that a modern form of Islam can emerge.

The barbarity of Islam has been going on since the days of Mohammad.

So maybe Pipes would like to actually explain how Islam is going to reform. Because in approximately 13 years of speaking out on this issue, I have not seen even one Muslim condemn any of the actions of Mohammad. That includes America’s “moderate Muslim” poster boy Zuhdi Jasser.

Besides not wanting to continue failed policies, and having actual answers, the main difference between him and I is:

Daniel Pipes wants to save Islam in America, I want to save America from Islam!

Keep up the fight friends!

← GOP Congressman Calls for Action Against Islam!
From Russia With Love ~ My Burqa Bitch! →

25 comments for “Daniel Pipes has his back up Against the Wall ~ Admits Logan’s Warning is Correct!”