A couple of weeks ago I stated that Pamela Geller and Robert Spencer had hit a home run with their brilliant anti-jihad subway ads. 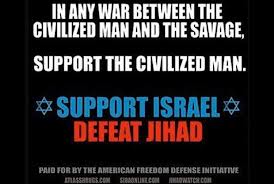 Today we see evidence that the Muslim Public Affairs Council (MPAC), one of America’s most powerful Islamic organizations is still shaken up by the ads! The difference between Pamela’s ads and the one MPAC is going to use is that hers is truthful, while theirs is another IslamoCON!

Right off the bat we can see the ads are a con. If MPAC truly supported American values they would become apostates of Islam. As many aspects of Islam clearly contradict America values. One being that Islam allows the rape of sex slaves, and I am pretty sure that is illegal here. Another is that there is no age minimum for marriage in Islam. Those with morals call that pedophilia.

From there the con moves on to the usual Muslim scream of “RACISM”! The only problem with that talking point is that Islam is not a race, and can someone please tell me how not wanted to be dominated by Islamic Law make on a bigot?

(Washington, DC – 10/18/12) – On Monday, Oct. 22, New York City subway system will feature ads by the Muslim Public Affairs Council, which call on New Yorkers to stand together in opposing bigotry and hatred. The advertising campaign is an effort to counter the recent hateful and divisive ad released by Pamela Geller’s organization, the American Freedom Defense Initiative.

MPAC’s goal is to come off looking like the good guy with these ads. But the truth is that they support what might be the most bigoted person and divisive person the world has ever seen.

One week later, on Monday, Oct. 29, the Metro system in Washington, DC, will post the same ads on WMATA buses across the DC, Virginia and Maryland areas.

The NYC ad campaign will kick off this Sunday evening at Columbia University during “HeART Over Hate: Repelling Bigotry through Art & Music,” a free evening of music and entertainment hosted by MPAC-NYC and the Columbia University Muslim Students Association.

“It is important we counter such ads with messages of peace that are the true representation of what we stand for as Muslims,” said Salam Al-Marayati, MPAC’s President. “Today, America needs leadership to rise above racism and bigotry, and MPAC is playing that leadership role through these ads.”

← ENRAGED Slave to Sharia to Logan’s Warning: Stay Away from Islam Videos on Youtube BITCH!
Flags of Islamic Countries Flying High in NYC! →