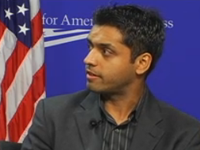 The origin of the “Islamophobia” IslamoCON.

Last week the insidious Islamic organization, the Muslim Public Affairs Council (MAPC), once again used the freedoms of America against America, and held a teleconference on “Islamophobobia”. Muslims use the term “Islamophobia” as an attack tactic in an attempt to bully and silence those who criticize Islam. What MPAC and other insidious Islamic organizations like CAIR do not tell you is that the term was born in Iran back in 1979 following the Islamic Revolution.

The notion of “Islamophobia” emerged from the Islamic Republic of Iran following the revolution in 1979. According to Caroline Fourest and Fiammetta Venner, two French journalists who have written extensively on the subject, the Iranian mullahs introduced the idea of a phobia to Islam as a response to international criticism of such practices as the forcing of women to wear headscarves, and persecution of homosexuals and other violators of “Islamic morality.”

Since then the tactic has been gathering stem and up until recently has been stemming rolling the West. The term “Islamophobia” was a key point in a 16 point plan to silence the critics of Islam that I had discovered online back in 2010. The plan was posted on the website Council of Islamic Organizations of Greater Chicago.

What is so deceptive about the plan is that Islam is NOT a race, but Islam IS anti-Jewish.

Thankfully I believe its impact has already peaked, as non-Muslims are waking up to the play on words. But that does not mean Muslims are done trying to use it as a shield for the Sharia campaign that is taking place across the West. MPAC is one group of Muslims that is still trying to fight the anti-jihad campaign with the term, and last week they held the teleconference which was lead by a Twitter “friend” of mine named Wajahat Ali.

Ali was one of the teleconference’s leaders pushing the deceptive “Islamophobia” term.

Wajahat Ali, the co-author of the Center for American Progress’ “Fear, Inc.: The Roots of the Islamphobia Network in America”;

“Anti-Muslim hate groups have increased 300 percent in the last year. The FBI has reported a 50 percent increase in anti-Muslim hate crimes. More than 40 percent of Muslims say they don’t want Muslims as their neighbors, one-third say they don’t want Muslims on the Supreme Court and a similar number don’t want a Muslim in the Oval office,” Ali said. “So perhaps it is now time we turn the tables and expose the enablers and disseminators of divisive fear-mongering rhetoric that has no place in today’s fragile and racially sensitive environment.”

Now I strongly condemn the hate crimes, BUT, considering the fact that Muslims are openly pushing for Sharia across America, it is our duty as non-Muslims to try and protect our future generations from the barbarity of Sharia Law. Considering the fact that Muslims are using our freedoms against us to bring in aspects of Sharia, many non-Muslims are finding it hard to trust Muslims. Muslims have brought the distrust upon themselves. But Ali does not care about that. It is clear he wants to bully us into silence! He wants to “turn the tables” on the non-Muslims who are legally fighting for life as we know it. Well don’t let him bully you! Don’t let any insidious Islamic organization bully you! It is time for the infidels to turn the tables on the likes of MPAC and Wajahat. Call them out on their views, and expose what their true Islamic agenda is. Don’t be afraid to ask them the tough questions. In the past him and I have had some exchanges on Twitter. But there are some very concerning questions he will not respond to….

Christopher Logan ‏@LogansWarning
@WajahatAli You use the “Islamophobia” term a lot What is a non-Muslim supposed to like about the Sharia campaign that is taking place here?

Christopher Logan ‏@LogansWarning
@WajahatAli Do you condemn Sharia Law? Do you condemn the age minimum for marriage in Islam? Mohammad for raping sex slaves?

Christopher Logan ‏@LogansWarning
@WajahatAli I take it that your non-response means you are for Sharia and will NOT condemn Mohammad for anything. Like in the past.

Now if Islam was really no threat to America as we know it and non-Muslms, you would think Ali would lead the way and condemn Mohammad‘s action and Sharia. But he has not and if we look at his Twitter page tonight we see he is still pushing the “Islamophobia” nonsense. 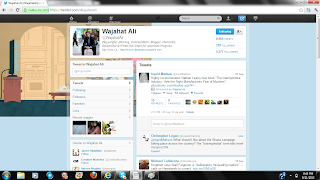 His silence makes me wonder where his true loyalty lies. Is it to America or the Koran? Calling us “Islamophobes” for recognizing how Islam is creeping in, is the equivalent of stating those who opposed Nazism were suffering from “Nazisophobia”. Ali “my friend”, the tables have been turned against you! Where do you stand?! For or against Sharia Law? Let me make this clear to you Ali. YOU will NEVER bully me and a long list of others into silence. You think you can intimidate non-Muslims so Islam can win this war. That will NOT happen. Remember who has the numbers here. Your campaign will be defeated within the law.

Racism and anti-Semitism are “fruits of the same tree of hate”.

And what tree is that?

“kill Jews and Christians wherever you find them”.

Islam is the tree of hate.

A position statement (fatwah) by the Assembly of Muslim Jurists of America states that is required for Muslims to be hostile to courts which rule by man-made laws and to have hatred in their hearts for the U.S. courts. See: http://www.translatingjihad.com/2012/03/assembly-of-muslim-jurists-of-america.html

There is no greater contradiction in terms than “Muslim jurist.”
Jurists do not bleat like sheep.
They work from the premise that law = reason.
The jurist is an actor of Western Civilization.
There are no “Muslim jurists.”

Keep up the good work, LW!

[…] infidels! I would just like to add a video follow-up to the “Turning the Tables on MPAC and Muslim Attorney Wajahat Ali….” article. In the closing of the article I asked where Ali’s true loyalty lies, with America […]

[…] Among us”. It is an effort to highlight the fact that a Muslim does not have to be a member of  a major Islamic organization to be a threat to America.  Showing how Islam turns citizens against their own country. A treacherous way of […]