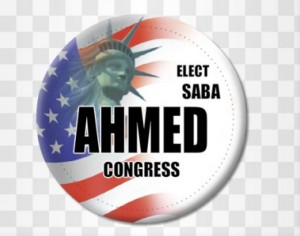 In these days of the brazen Sharia campaign, one of the favorite weapons in the arsenal of Islam is to use our freedoms against us to help advance Islam. One of my favorite ways of fighting back is to expose the lawful jihad being waged across America.

It has been documented on this site that Muslim Congressman Keith Ellison had spoken at a Sharia conference here in America.

It has also been documented here that Muslim Congressman Andre Carson had spoken at an Islamic convention which featured Ibrahim Hooper, co-founder of the Council on American Islamic Relations (CAIR), and Brooklyn’s own call to pray blasting Imam Siraj Wahhaj.

Today we will take a look at Saba Ahmed, who is running for Congress in Portland Oregon.

Hat tips to Andrea, Jodi, Pamela, and thanks for a helping hand to Maggy.

Saba’s website is a huge warning sign as to why non-Muslims should not vote for her! As soon as you go her site, you see the following Koran verse:

In the Name of Allah, the Most Beneficent, the Most Merciful. All praise belongs to God, Lord of the Universe, the Beneficent, the Merciful and Master of the Day of Judgment. (Lord), You alone We do worship and from You alone we do seek assistance, (Lord), guide us to the right path, the path of those to whom You have granted blessings, those who are neither subject to Your anger nor have gone astray. Amen!
(The Holy Quran, 1:1-7)

The verse is accompanied by its recitation in Arabic, which can be heard by clicking on following link:

Saba Ahmed, was born and raised in Islamabad, Pakistan. She moved to Portland, Oregon for college and earned her Bachelors degree in Electrical Engineering and Physics from Portland State University. Once Saba started to take an interest in political work, she worked for Governor Ted Kulongoski and Congressman Earl Blumenauer to gain more political experience. She also worked at Intel in several engineering and management roles. Saba will be completing her joint Juris Doctorate-MBA degrees later this year with a focus on intellectual property law from Lewis and Clark Law School and University of Portland.

Prior to joining the first class of Emerge Oregon, Saba participated in the New Leadership Oregon (NLO) program and met several politically engaged women who encouraged her to apply for Emerge. Saba felt the concept of running for political office was still a fairly abstract concept since she is only in her early twenties. Yet, upon gaining acceptance and beginning her involvement with Emerge Oregon, Saba has gained the support and confidence to crystallize her interest in running for Congress in the future. She says, “I realize that it will be a tough road and it may take several years, but I am willing to give it my best.”

Saba has found political networking to be more accessible and comfortable since she has aligned herself with Emerge. Saba says people are generally very “impressed and intimidated” when they learn she is a program member of Emerge, because they recognize “a new powerful, highly-connected group of Oregon women will be running for office.”

Upon graduating law school, Saba plans to explore the possibility of running for U.S. House of Representatives. “The United States and the State of Oregon have blessed me with so much,” she says, “I would like to give it back through public service.”

She believes her corporate background will help her participate in conversations regarding our economy. The economic climate in Oregon is a particularly compelling factor for Saba’s candidacy – they have the 4th highest unemployment rate in the country.

Growing up in Pakistan gives Saba a unique vantage point into foreign policy. Saba observes that there are few members of Congress who have lived in the Middle East. Without adequate cultural understanding, Saba challenges whether Congress can authentically put forth policy affecting Muslims, Pakistan, and the Middle East. She strongly believes she can help “bridge gaps between the East and West” and contribute to current foreign policy. While Saba appreciates “decisions that are well-researched, they are not the same as someone who has lived in both countries.”

No thanks Saba, the last thing this country needs are more Muslims involved in US Foreign policy.

Now we will take a look at her views on immigration.

It shouldn’t take 15-20 years to legally bring family members to the United States.
Immigrants should be welcomed with open arms. God teaches us to Welcome Strangers!
Immigration helps with trade and economic diversity.

As you can see Saba is trying to tell us that her God is the same God of religious non-Muslims. Keep your religion to yourself Saba!

Here are some websites that Saba is recommending on her site.

I’m sorry Saba but I don’t fall for the interfaith con, and you don’t look like you are interested in “bridging any gaps”. You look like you stand with Islam over America. 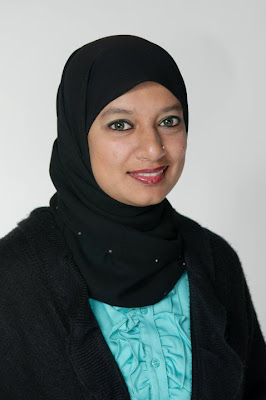 We have seen the results of Muslims in US politics. When it comes to Saba Ahmed, Candidate for Congress. Just say no!

← Logan’s Warning Message to the Churches That Allow Muslims to Pray in Them
Saturday Afternoon Radio Interview on Tyranny’s Nemesis! →

67 comments for “JUST SAY NO TO ~ Saba Ahmed, Candidate for United States Congress”