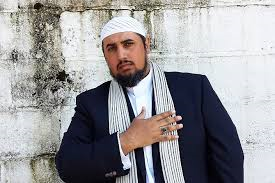 One of the reasons the West is losing the war with Islam, is because of Muslim propagandists. Propagandists most of the media does not even begin to challenge. Two of the UK’s most prominent are Medhi Hassan, and Mo Ansar. Over a year ago I had a conversation with Mo via the Logan’s Warning Twitter account, and it did not take long for him to block me. Unfortunately I did not take screenshots that time.

This time using the North American Infidels account I got him though! His lies were easily exposed.

For those who do not know Mo is a regular Muslim propagandist on numerous media outlets. So feel free to use my work against him if need be.

From his Wix profile:

Mohammed is a political, religious and social commentator regularly appearing on British television and radio.

A theologian, public speaker and visiting lecturer on Islam in contemporary Britain, Theology and Islamophobia; Mohammed is a civil rights activist and legal advocate working with a number of organisations in the fields of politics, diversity and education. With a wealth of experience tackling extremism and radicalisation, Mohammed has lead and delivered cutting-edge local and national initiatives. 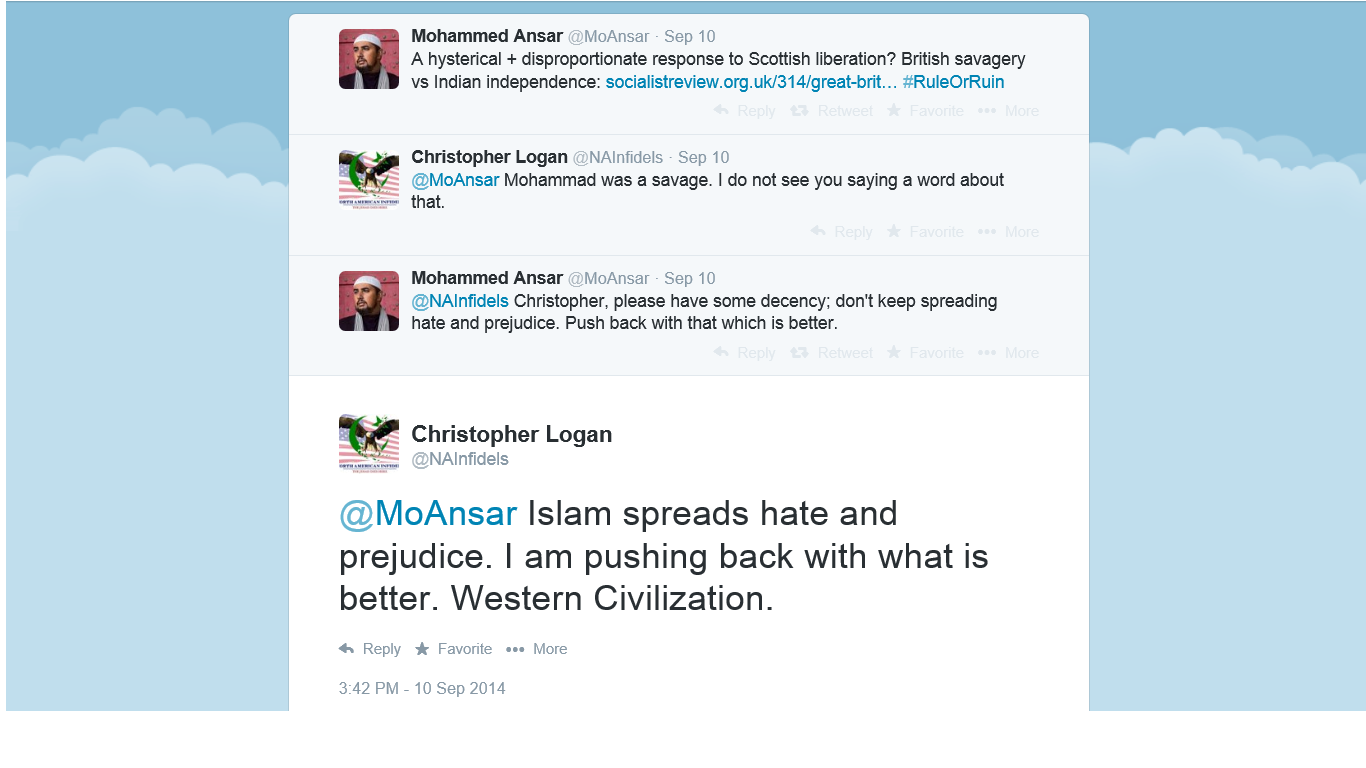 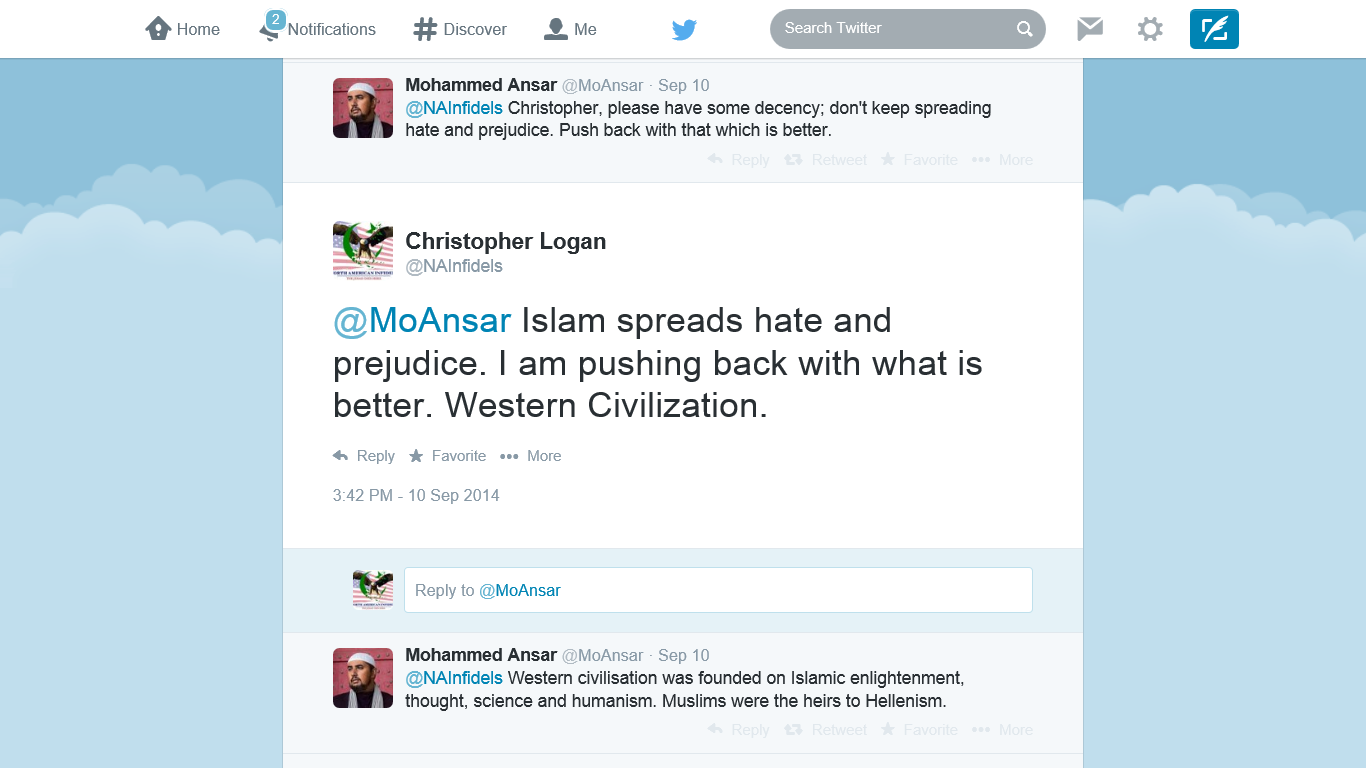 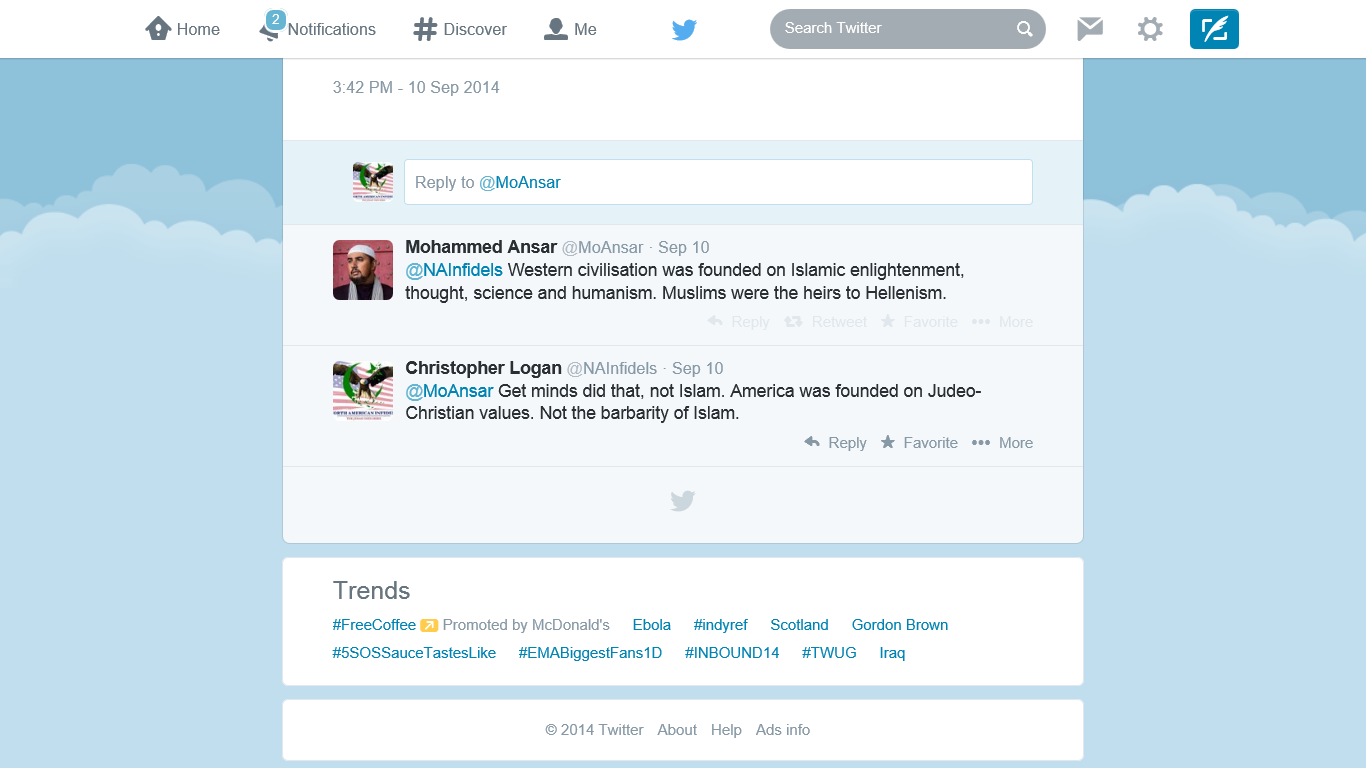 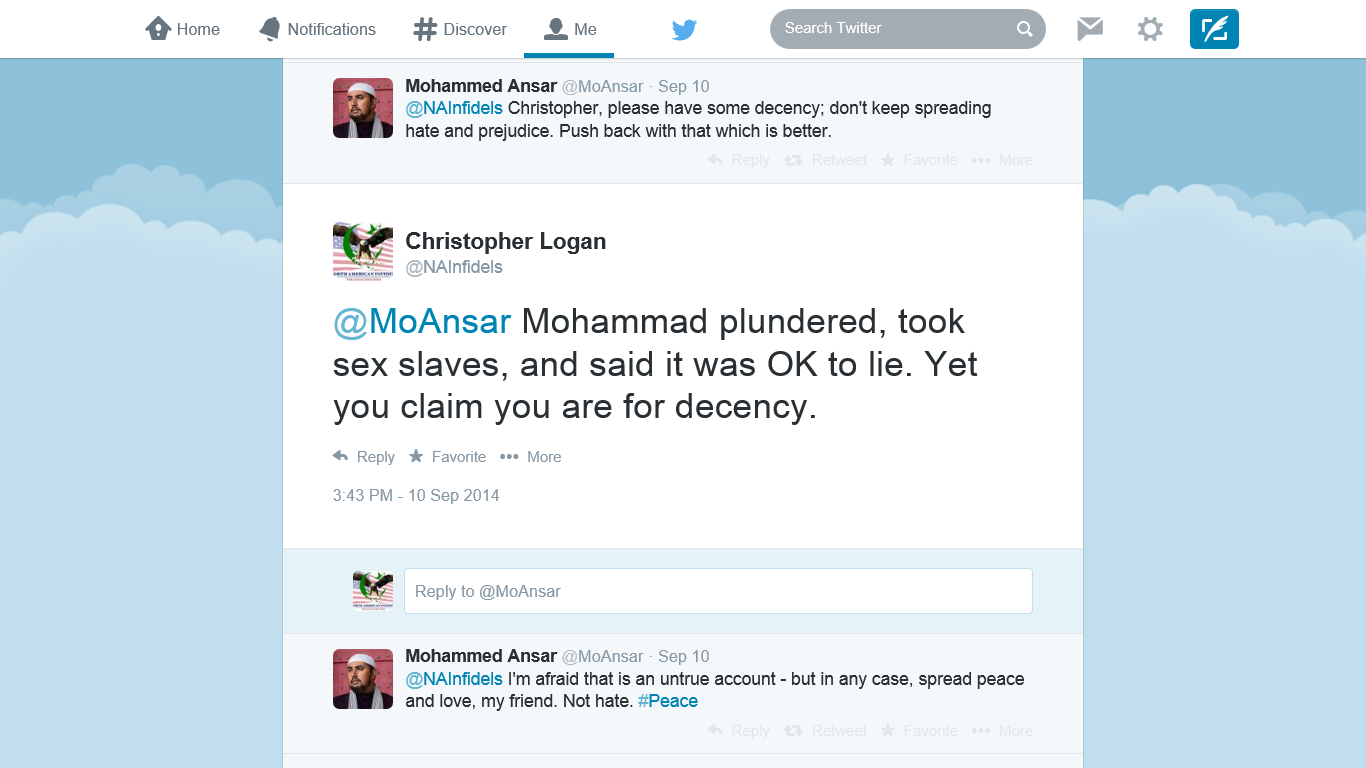 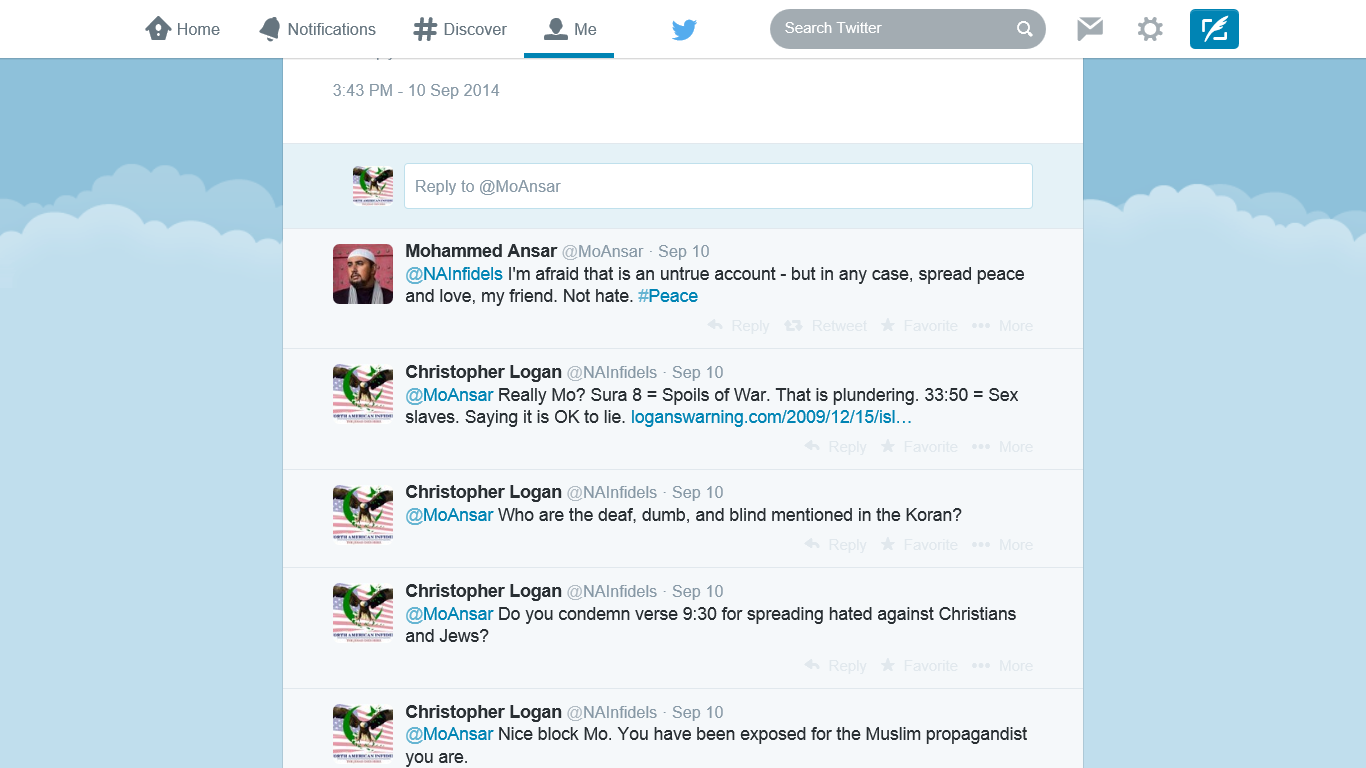 As you can see Mo stated that Mohammad did not take plunder, take sex slaves, and lie. But the fact is that he was a deplorable man who participated in all three actions.

From the Sahih Ahadith.

The Prophet said, “I have been given five things which were not given to any one else before me.
1. Allah made me victorious by awe, (by His frightening my enemies) for a distance of one month’s journey.
2. The earth has been made for me (and for my followers) a place for praying and a thing to perform Tayammum, therefore anyone of my followers can pray wherever the time of a prayer is due.
3. The booty has been made Halal (lawful) for me yet it was not lawful for anyone else before me.
4. I have been given the right of intercession (on the Day of Resurrection).
5. Every Prophet used to be sent to his nation only but I have been sent to all mankind.

Not only did he take sex slaves, he had the audacity to tell his marauding men it was OK to impregnate captives of war.

Islam and Mohammad on lying:

As you can see Mo here is quite the “civil rights” activist, and apparently the taking of sex slaves is not an extreme action to him.

What does confronting Mo with the truth on Islam get you? 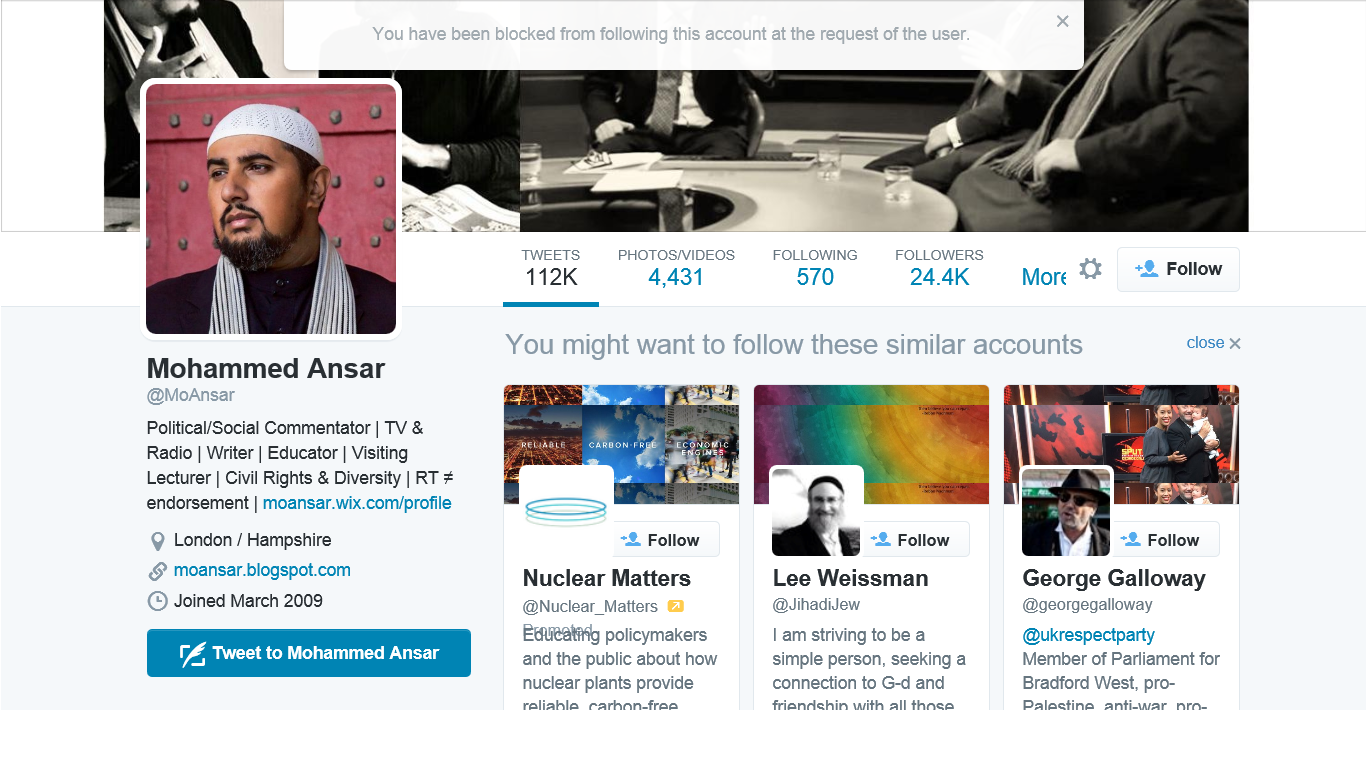 That is because Mo preys on naïve and trusting non-Muslims. He is no friend to the UK, women, or children. Another deplorable treacherous Muslim of the UK.

Whenever a dead man in debt was brought to Allah’s Apostle
he would ask, “Has he left anything to repay his debt?” If he was informed that
he had left something to repay his debts, he would offer his funeral prayer,
otherwise he would tell the Muslims to offer their friend’s funeral prayer.
When Allah made the Prophet wealthy through
conquests, he said, “I am more rightful than other believers to be the
guardian of the believers, so if a Muslim dies while in debt, I am responsible
for the repayment of his debt, and whoever leaves wealth (after his death) it
will belong to his heirs. “

An arselifter dies and finds himself in front of St Peter at the gates of heaven.

“No, no this isn’t right. I want to speak to the prophet mahound, right away.”

“No! I want to speak to the prophet mahound,” replies the arselifter.

“Well, you can talk to Jesus if you want,” says St Peter, and goes off to find him.

“Jesus, I don’t understand what’s going on here,” the arselifter says. “I want to speak to the prophet mahound.”

“Well, you can talk to God if you like”, says Jesus.

This appears acceptable to the arselifter and off they go. Jesus lets the arselifter into a big room and leaves him. After a few moments there is a puff of smoke and God appears.

“Yes, what seems to be the problem here?” booms God.

The arselifter is very worked up by now. “Look, I don’t get what’s happened here, I want to talk to the prophet mahound!”

“Okay, okay,” says the arselifter, “I’ll have a fucking cappuccino – now will someone please let me speak to the prophet mahound.”

A lot more uplifting pislamic story than yours.

But your joke doesn’t really work, Bruce, because no arselifter will ever enter Heaven.

God let mahound in to become a servant. Maybe he is recruiting more butlers, Bruce?

Allah, the capricious forgives whom he will. God, the just damns those who falsely impute to him words he did not utter.

Kauthar is in his grave, being tormented with hammers, pokers, venomous snakes, crushing and a chain drawn from one end of his aliamentary canal to the other. Reference Mishkat ul-Misabee, Vol. 1 . He awaits eternal damnation.

And you have seen this Kauthar for a fact? or do you just simply believe everything you see, hear or read?

He died in 632, long before my birth. I do not trust hadith & sira, but those are the best available sources.

He claimed to believe that punishment of the grave crap, it is mentioned in several authentic ahadith but only detailed in Mishkat.

Somehow, I don’t think there are sewers in Heaven, Bruce. Maybe shoeshine boys.

Maybe a shortage of shoeshine boys then?

Yeah, I can see that.

Unrepentent sinners will not be admitted to Paradise, they will go to the fire. Moe will not be serving coffee to anyone. He will be burning, drinking boiling water, eating nettles and puss filled bandages while repeatedly having his skin burned off.

Unlike Muslims, I do not worship the moon or its alias.

LOL! What a tool!

It’s wonderful that you are getting ideas from this article
as well as from our dialogue made at this time.

When someone writes an piece of writing he/she retauns the image
of a user in his/her brain that how a user can understand it.
So that’s why this post is great. Thanks!