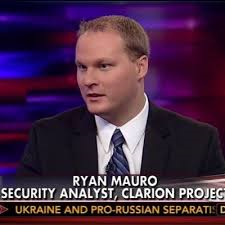 During a recent radio appearance on the controversial Last Stand Radio Show, I had criticized the Clarion Project for misleading Americans into believing “moderate” Muslims are going to save our great country from Islamic rule. A notion I was told would save the UK. Look how that is turning out.

About a day after the show I was all of a sudden followed by the Clarion Project on Twitter. So as with others in the past, I had challenged them to a debate on their views of “moderates” being the savior, and “Islamism” and not Islam itself being the problem. In return they ran from the challenge and unfollowed me.

So from there I decided to put one of their non-Muslim members in my crosshairs. (Figuratively) The target being Fox News Correspondent Ryan Mauro. Ryan is basically a clone of the failed “moderate” Muslim campaign waged by Frank Gaffney, Daniel Pipes, and Steve Emerson, etc. All supporters of Mohamed Zuhdi Jasser.

If you check his Twitter account he makes a living off of telling the public what they want to hear. That “Islamism” is the problem instead of Islam itself, and $ells them an easy out. The belief that the problem will resolve itself within the ummah. Which is the equivalent of having a doctor state you have stage IV cancer, but refusing the chemotherapy that is necessary to destroy it. Just believing it will disappear on its on.

The problem with the Mauro’s of the world is that while people like me and many others are working tirelessly to put and keep the focus on Islam itself, Ryan works against us by trying to get the focus off of Islam and onto the fictional “Islamism”. Which in turn helps keep Islam alive in America, and I do not believe we will defeat the enemy if we cannot even name the enemy. So in the name of getting to the bottom of this issue, I had sent out the following email to Ryan and some colleagues of mine. One being the United West’s Tom Trento.

Tom, this is not aimed at you but you do have a popular radio show and do know Ryan Mauro. I believe in order to win this war we need to get to the root of the problem, which is Islam itself, and also face the reality that “moderate” Muslims are not going to save America from Islamic rule. A notion that people like Ryan Mauro are pushing. A notion I am obviously strongly against. So I am challenging Ryan to a live radio debate on the issue. Would you be willing to host it? I will also be posting the challenge on Logan’s Warning as well.

Ryan, you have run from my request in the past. Doing so here will say a lot….

In the proof of the email you will see that it was sent out nearly two weeks ago. (Names of the other recipients have been omitted.) 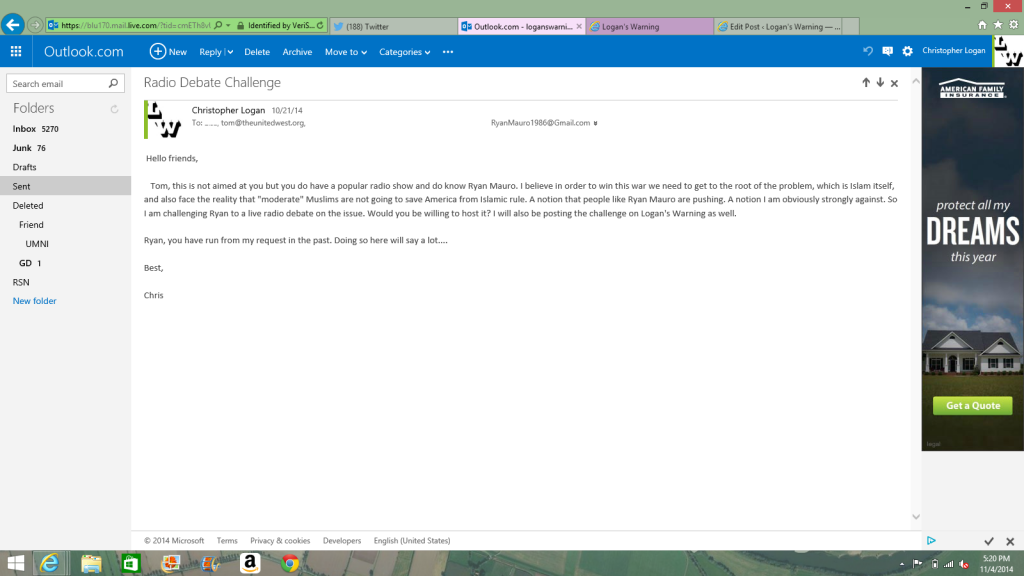 Which shows us that even when called out in front his friends he will not stand up and defend his position. Does he have something to hide? I hope the pay is good Ryan….

← Washington Muslim: Logan, you Will Drown in Your own Blood!
The UK’s Muslim Propagandist Mo Ansar Exposed! →