So in order to counter their self-destruction message I am truly honored to appear on the Captain’s AMERICA – Third Watch Radio Show. Hosted by the one and only Matt Bruce.

It is with a high degree of honor as a combat wounded Vietnam Veteran, Retired Fire-Rescue Captain, First Responder to the World Trade Center on 9/11/2001, former Owner of a Trucking Company-Freight Agency who hauled for the Military and having a career United States Marine Corps Officer son, that I make every attempt to get the story out from our First Responders & Military serving all of us while they help keep America FREE & SAFE, as a News Reporter & Host of my own Talk Radio Show, “The Captain’s AMERICA – Third Watch.”

Matt is no new comer to the radio industry. He has been spreading the word for 17 years now, and has interviewed some real heavyweights. 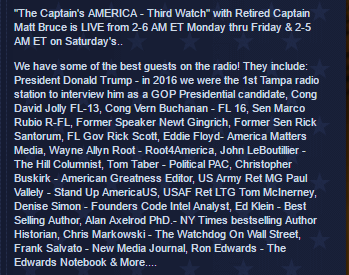 As you can see the show starts at 2AM EST, and I will be coming on at approximately 5:05AM. Anything for the cause! To hear the show live here is a list of affiliates.

Topics to include:
1. Islam or Islamism? Which is the best terminology to use?
2. The cultural affects of Muslim immigration.
3. Why Islam will not reform.
4. Why Muslims do not have to be violent to be a threat.

All topics much of the MSM is not willing to touch.

Listen in night owls! If you are not a night owl you can listen to the podcast the next day by clicking HERE. Thank you.

← Muslims Show Their True Colors in the Netherlands ~ Video
Hey Zuhdi, When do you Actually Explain how you Will Reform Islam? →

1 comment for “Thursday Morning: Logan’s Warning Live on the Captain’s AMERICA Radio Show! Via AM 860”