Tonight while I was being interviewed on Audacious Audrey Russo’s REELTalk Radio Show, we spoke about how I engage Muslims. I said to Audrey that one of the reasons I do it is to show their true colors. What they believe in. Well tonight we get another example of the mind of a Muslim. As another wanna-be Mohammad takes a stand for what those with morals call child marriage.  This time the potential predator is traitor to America, JihadiFanClub.

The Islamic state only takes in slaves that are prisoners of war, not random free people off the street. Also there is no minumum age for marriage once a person hits puberty and is seen a s mentally mature enough to take on the role of marriage then they are an adult and that is at diffrent ages for diffrent people. Its called biological adulthood. Also even in the US the age of concent was 10-11 and in Delawares it was 7. Where the founding fathers perverts? 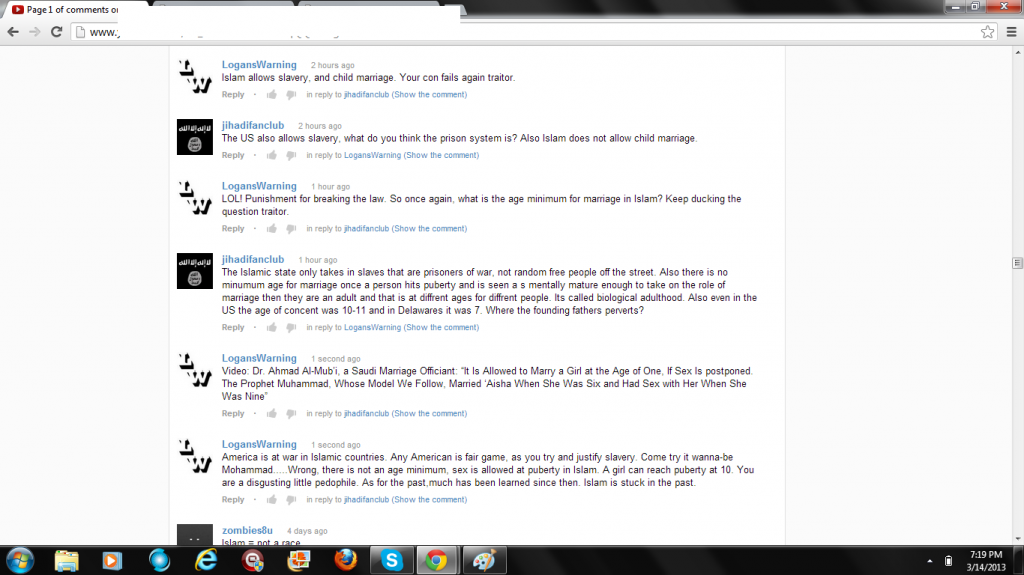 My response to this sicko was the following:

America is at war in Islamic countries. Any American is fair game, as you try and justify slavery. Come try it wanna-be Mohammad…..Wrong, there is not an age minimum, sex is allowed at puberty in Islam. A girl can reach puberty at 10. You are a disgusting little pedophile. As for the past, much has been learned since then. Islam is stuck in the past.

Unfortunately him being a Muslim makes his views no surprise to me. Because his hero Mohammad was a pervert, and here is what the Koran states about the character of Mohammad…

Like I stated, Islam is stuck in the past and that is where it belongs. Show it no respect at all!