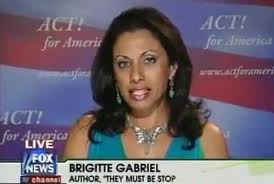 Do you remember when I said that ACT!’s Brigitte Gabriel was $elling America a bridge to nowhere?  Well now the Queen of False Hope who lied about Zuhdi Jasser, when she said he truly represents Muslims in America has stooped even lower!  As she is now asking for donations on the back of the hard work for others. One being Mr. Tom Trento of the United West.  Check out the following email….

The purpose of this message is to announce the new iGive Program, which is a cost free way to support ACT! for America.
First, however, we would like to take a moment to provide you with the next five (5) meeting dates for the Katy Chapter of ACT! for America. Those dates are Tuesday, December 18, 2012; Tuesday, January 29, 2013; Tuesday, February 26, 2013; Tuesday, March 26, 2013; and Tuesday, April 30, 2013. The meeting place and starting times will remain the same as throughout 2012.  Details regarding each of the meetings will be provided as the meeting dates grow closer.
Now, on to the iGive Program.

Their goal: The flag of jihad over the White House

The five minute video below, produced by the organization The United West, provides glimpses into what happened at the 2012 Muslim Day Parade in New York City.

Near the end of the video is an image from the parade program showing a jihad flag flying over the White House.

This is the goal of radical Islam in America.

This is what we are fighting.

All you have to do is sign up, download the iGive button, and shop online at the more than 1,000 participating companies. With every purchase you make, a percentage of the purchase price is donated to ACT! for America. Its a great way to help ACT! for America this holiday season ­and all year round. (Note: If you make purchases from Amazon, read the special instructions).

New York City Muslim Day Parade 2012 – Hate On Parade
Hate and Intolerance for America was on parade September 23, 2012, at the NYC Muslim Day Parade. [ … ] The Jihadist’s pulled down and burned the American flag and replaced it with the Islamic Black Flag of Jihad as a symbol of dominance and military victory. [ … ]
http://www.youtube.com/embed/HjFSi1AZTq8
http://www.youtube.com/watch?v=HjFSi1AZTq8&feature=player_embedded#!
Get Started Here!
http://www.igive.com/welcome/lp2/wr14.cfm?c=62258&m=847176&jltest=1
Help us fight the evil that wants to subjugate our nation to radical Islam and sharia law. When everyone of us does a little, together we accomplish a lot!
http://www.actforamerica.org/

30 comments for “ACT!’s Brigitte Gabriel ~ Leeching off the Hard Work of Others!”