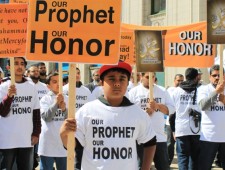 Back in 2011 the insidious Islamic organization, Hizb ut-Tahrir America, held a conference in Illinois in which they called for two events that would shake the world. The first being that Muslim armies unite , and the second, the call for Sharia Law to the chants of Allahu Akbar. This was another classic example of how Muslims selfishly plot to destroy non-Islamic countries from within.

Tonight we see that Muslims in Illinois took to the streets this past September to honor the …..errr…the greatest perverted conman whoever lived!

Chicago, IL – Hundreds of Muslims rally in Chicago downtown in support of the beloved Prophet Muhammad (SAW). The speakers introduce the non-Muslims to the values and characteristics of this great prophet and invites the non-Muslims to research more about Prophet Muhammad (SAW) before forming any opinions and humbly invites them to study more about Islam and the Quran to learn the truth. Muslim men, women and children took part in this rally coming from all across Chicago and beyond. The signs and banners held by the Muslims showed their immense love and respect for the noble prophet, may Allah’s peace and blessing be upon him and his followers.

Not only did Mohammad and his marauding men treat women and children like possessions, they also raped and impregnated the poor widows! 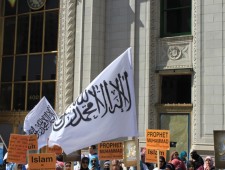 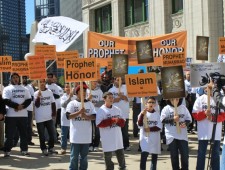 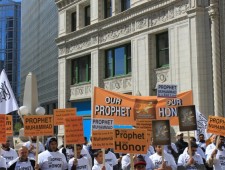 most muslims really dont have a clue about mohammed. Its impossible for them to comprehend that their supreme leader raped, murdered. Plundered and had sex with a dead woman. They really are pathetic creatures who think only with their penises and vaginas.

dream on, you already have a muslim as president and your fat butt is still attached to your chair, what will happen is that America will cease to exist, all white men will be killed and their women and children raped.

Thanks for proving my point slave. Come and try it….

What about our dogs and pigs? Will you rape them too? LOL

I believe Jamal is back…

fdsafdsa or Jamal or whatever your name is, you show your mind is just as sick and demon possesed as muhammads was. Please keep making comments like that, every time you do it makes my job exposing islam for the EVIL CULT it is even easier.

You have only disgrace.
Your soul is doomed.
Your prophet is false.
Your Allah is Satanic.
We judge you by your fruits, conquest, torture, humiliation, death. All of this is of Satan, not of God.
The fire is waiting. Your faith and if you do not recognize salvation as coming from the Jews, your soul will burn.
Your demon demands blood sacrifice.
God never does.

What needs to be started is the churches getting knowledge of islam and backbone enough to stand up and defend our faith!!

Without question Bobby. The Church’s overall inaction on this issue is a huge problem.

Churches are worse than clueless. I talked with my pastor who defended islam as a faith because he was so completely clueless. When I recited a few “kill and torture the Christians” verses from the koran for him he decided I was “unwell” They just do not believe that anything calling its self a religion could be that evil. They compare everything to Christianity and they are so under fire from the left about gays etc that they are afraid of being labeled.

When i tried to talk about events in Britain with my pastor he said he and his wife just got back from there and they did not even see any muslims. (never left the tourist areas evidently)

I would love for him to explain how not burying your head in the sand makes one “unwell”. He lased out at you, in order to justify his cowardice on the issue.

How does he square his position with the Quicumque Vult, or Athanasian Creed?
It states clearly that if you do not believe in the Incarnation and the Blessed Trinity, then you cannot be saved. These are the doctrines of Christianity, and they are scripturally as well as traditionally based– in both New and Old Testaments!
If he asserts that Muslims are worshipping the same God as we are, then he is denying the existence of these doctrines and refusing to understand God on the basis of them.
Serious business! Because to deny the doctrines of the Quicumque Vult is to submit to Islam.
He says you are “unwell.”
Challenge him.
There are excellent resources and people out there who can stand up to this pretender.

Islam offers two fatal insults to Judaism and Christianity.
In Judaism, Abraham is the patriarch of Israel, of the Israel of the Hebrews, and that of Jesus.
This is dogma, above argument.
In Islam, Abraham is no more than a prophet, minor in relation to Mohammed.
In Christianity, Jesus Christ is the Son of God, the redeemer of humanity, the savior of every soul.
In Islam, he is no more than a prophet, and minor in relation to the false Mohammed.
Muslims imagine a bloodthirsty Jesus on the Last Day, and judgment as the torture of all souls except those of the Ummah.
Christians understand it to be otherwise.

The means of protecting the Church are in your hands– you need only scripture, an understanding of traditions, the creeds and Christian history.
Christianity is valid, defensible, and above all, holy in the sight of God and its adherents.
Believe that and the rest takes care of itself.

[…] 100′s of Chicago Muslims Take to the Streets to Honor Their Perverted Prophet! ~ Video | Loga… From loganswarning.com – Today, 12:01 AM Back in 2011 the insidious Islamic organization, Hizb ut-Tahrir America, held a conference in Illinois in which they called for two events that would shak… […]

The video they bitched about has been documented in a post entitled ‘Innocence of Muslims: True or False; You Be The Judge’.

If you want to wise up your church, find my blog post entitled ‘The Defamation of Jesus Christ’, print it and give it to your Pastor.

Brit in exile
Reply to  Dajjal

Do you have a link please?

Your prophet is false.
Your honor is disgrace.
Your religion is profane.
Your souls are doomed.
Submission is the keyword of Islam.
Submission is also the import of the words: abandon hope, all who enter here.
Truly, your Allah is a demon, Satan or his closest servant.

If your honor is your prophet, then you do not honor the nation, the U.S.A., nor do you honor your state.
Your loyalty is to your tribe, your masjid, your Allah, your false prophet.
You are the slaves of Allah.
Therefore, you should not be citizens of any country, except Saudi.

That is a very good point eib!

[…] (typeof(addthis_share) == "undefined"){ addthis_share = [];} Last night I posted my “100′s of Chicago Muslims Take to the Streets to Honor Their Perverted Prophet!  article. It showed that Mohammad and his merry men were rapists, and just minutes later the […]

The Quran & Hadiths endorse both of these actions. Anybody who choices who worship such things are enemies of decent society.

Islam is a bloodsucking religion dats why dey are killing harmless children in Nigeria. They call demselves boko haram but i call dem boko suckas. You doin a gud job Logan i wish u kind is a Nigeria i wud hav love it.

Traitors Among us #1: Jihadiffanclub | Logan's Warning

Hi to each body, it my first go to see of this blog; this website includes surprising and really noted data for visitors.