Just two days ago Muslims in the UK stated they will soon be enforcing Sharia Law in several sections of country. If you think Muslims in America are different and do not want Sharia, please take a look at this video from Hizb ut-Tahrir America’s, June 26Th Khilafah Conference 2011. 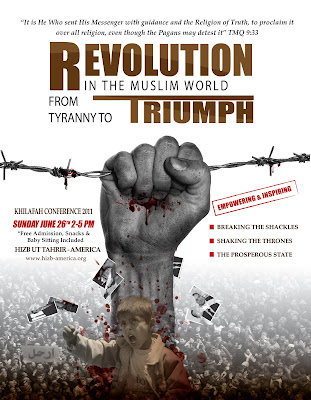 In the up coming video Muhammed states the Ummah (Muslim community) is allowed to govern, but Allah is the only one who can legislate, and make laws.

Koran verse 004.059
YUSUFALI: O ye who believe! Obey Allah, and obey the Messenger, and those charged with authority among you. If ye differ in anything among yourselves, refer it to Allah and His Messenger, if ye do beelieve in Allah and the Last Day: That is best, and most suitable for final determination.

Muhammad also speaks out against democracy, as he uses our freedoms against us to try and help Islam take over America from within. While calling for full submission to Allah! This is a must watch video because there is no hiding the Islamic agenda in it!

Koran verse 049.001
YUSUFALI: O Ye who believe! Put not yourselves forward before Allah and His Messenger; but fear Allah: for Allah is He Who hears and knows all things.

This is no game my friends. We are at war, whether you like it or not!

Koran verse 009.033
YUSUFALI: It is He Who hath sent His Messenger with guidance and the Religion of Truth, to proclaim it over all religion, even though the Pagans may detest (it).

We may be at war Christopher…..but America is blissfully sleeping…..contemptuously ignorant of the warnings at her door…..

I am reminded of a line from the poem “Locksley Hall” by Alfred Lord Tennyson….

“Slowly comes a hungry people, as a lion creeping nigher,
Glares at one that nods and winks behind a slowly-dying fire.”

Islam and muslims mean to put every one of us to the knife……and still we stand…spineless, indecisive and indifferent to muslim threat and muslim taunt……sooner than later we must begin to face the threat…to rid ourselves of those politicians, bureaucrats and law enforcement officials who refuse to confront muslim threat…..to remove them, from the President on down……with an unmistakable sense of permanence and finality…..once that is achieved, then we turn our attention to each and every muslim on North American soil…..we have been warned….we have seen the ravages reeked by muslims on Europe…..let us not deal lightly with the islamic vermin that reside amongst us in the Western hemisphere…

Americans are the ones asleep, our politicians are morons, who dont know the taqyyia, kitman, or much about the quran, and they belive the lies from these people

The Stars and Stripes they light and say:
“Burn, burn, USA!”

Let them bluster. At least these subversives come to the attention of the authorities. I don’t believe that they (the authorities) are all as clueless as you might think. Modern Enlightened Western Civilization SHALL PREVAIL over these savages.
Isn’t this sedition?

America and Canada must put a ban on all further Muslim immigrants. Then they should ban Islam and force them to integrate into our society…no shariah, no Qur’an, Hadiths, and Sira, no Muhammad, no Allah.

Problem is…where and when will we get the leadership to get this accomplished?

Certainly, a Congressman Allen West may have the guts to do this as President…how do you get the man to run for office?

I believe Allen West is already running for President?

What these muzleem fellers need is a good old country ass whippin….and if they try this crap in Tennessee, I believe they’ll get one.

You mean whoopin. And don’t forget to spit some chaw when you say that.

Just a little humor from a red necked infidel

I doubt it tonto, they are already encamped in tennessee and demanding sharia law, look up the website creeping sharia

They’ve crawled into a hole and barred the gates….if you’d care to look. Ain’t like it is in Dearborn, MI where they talk smack all day long and even blare their prayer calls whenever they want. They keep to themselves here…..and they’d best. Folks in Tennessee are pretty tolerant til you piss ’em off….then it’s over.

Notice that this event was billed as the “Khilafah Conference 2011”.

The word Khilafah is Arabic for “Caliphate”.

“What these muzleem fellers need is a good old country ass whippin….and if they try this crap in Tennessee, I believe they’ll get one.”

I doubt that. I’d bet money they’ve already been trying that crap in Tennessee, Mississippi, etc. Most people in the South have become PC-ified in the past two or three decades (if not longer).

I’m reminded of these words, and more importantly, why we have lost sight of them.

September 11 2001, will always be a fixed point in the life of America. The loss of so many lives left us to examine our own. Each of us was reminded that we are here only for a time, and these counted days should be filled with things that last and matter: Love for our families, love for our neighbors, and for our country; gratitude for life and to the Giver of life.

The attack on our nation was also an attack on the ideals that make us a nation. Our deepest national convictions is that every life is precious, because every life is the gift of a Creator who intended us to live in liberty and equality. More than anything else, this separates us from the enemy we fight. We value every life; our enemies value none – not even the innocent, not even their own. And we seek the freedom and opportunity that give meaning and value to life.

There is a line in our time, and in every time, between those who believe all men are created equal, and those who believe that some men and women and children are expendable in the pursuit of power. There is a line in out time, and every time, between the defenders of human liberty and those who seek to master the minds and souls or others. Our generation has now heard history’s call, and we will answer it.

when will we MARCH against these PIGS?

Time to batten down the hatches and make sure that every family has the arms to protect themselves.
I put my money on the ‘lock and load’ crowd.

Don’t you just love the new talking points of the Pagans??? From a previous post on this forum.

So, … apparently the Muslims weren’t righteous enough either, because they were deposed as well. What goes around comes around, eh oh Muslim!!! However, worst is yet ahead for this happy horde of blood thirsty pagan miscreants.

Now the ummah is once again whining about restoring universal Sharia and, of course, the marvelous caliphate back to the planet. Oh what fun!!! Was the former caliphate all that marvelous??? Only if one wants to remain in the darkness of seventh century Arabian paganism. Ramadan, originally a pagan festival, starts once again this August. Muslims keep these pagan rites and rituals ‘religiously’ just as the former pagans did. Even the crescent moon that adorns many mosques was a sign of a former Arabian pagan deity.

Just look up the history of the caliphate and you will be bathed in blood. So now they threaten to bring all that former blood and gore back to the planet, starting with some rehashed brand of Sharia. Won’t that be just wonderful. It doesn’t sound like all of the ummah even agrees with this, so some of the less ‘moderates’ of their pagan cult will lead the way. What we have seen of their filthy pagan ways to date are not all that palatable, so just imagine how horrific life will be in this country (or any other former free land for that matter) where a new brand of sharia is enforced.

Below is a short vignette of their former, supposedly marvelous caliphate just to remind people just what joy Islam has brought to the world, and what all of us dhimmis have to look forward. Remember that with the change of caliphs, comes a change in some of the specifics of sharia.

c. 650 Caliph Uthman has the Qur’an written down.

800s Written collections of Hadith (sayings of the Prophet) are compiled.

813-33 Reign of Ma’mun. Theological controversy over whether the Qur’an is created or uncreated and eternal. Center for translation of texts from Greek to Arabic founded in Baghdad. (Evidently Muslim scholars questioned the veracity of the Qur’an very early on. Go figure!!!)

869-883 Uprisings of black slaves (Zanj) are eventually defeated.
**(It appears that Muslims also mistreated their black slaves. Who wudda thunk it???)**

940 Muhammad al-Mahdi, the twelfth imam, disappears. Twelvers still await the future return of the “Hidden Imam.” (Hence the eternal battle and bloodshed between the Sunni and Shiite sects.)

1501 Isma’il (1487-1524) claims to be the Hidden Imam and is proclaimed Shah (king) of Persia. Twelver Shi’ism becomes official religion of Persia.

1700s Muhammad Abd al-Wahhab rejects Sufism and all innovation (bid’a). Founds what becomes the Saudi Arabian kingdom. Hindus regain power from Mughals in northern India.
(Wahhabis are yet another, and of course, radical brand of Islam … see what great fun all this Islamic philosophy brings!!??!!)

1779 Afghans ousted by Qajar dynasty, which rules Persia until 1925.

1858 Last Mughal in India is deposed and India comes under British rule.

1917 General Allenby enters Yerushalim without firing a shot. The 400 year rule of the Ottoman Empire over the Middle East comes to an end.

1918 Fall of Ottoman Empire. League of Nations grants Britain mandatory status over Palestine and Iraq, and France over Lebanon and Syria.

1948 May 14, 1948 Israel becomes a nation “ … in a day …” in fulfillment of Yesha Yahu (Isaiah) 66:8 Pagan Islam’s control has been displaced from this part of the region formerly known as Palestine.

Let’s not forget the Armenian genocide perpetrated by the Ottoman Empire during and just after WWI. There were ‘wholesale’ massacres, deportations, and forced marches, along with the requisite rapes and sexual abuses upon these ‘infidels.’ The establishment of a new and marvelous caliphate will not only bring blood upon non Muslims, but it will also exacerbate the existing blood feud between the Sunni and Shiite sects. Many former caliphs were assassinated or deposed. There has been a constant struggle for power and ‘leadership’ in Islam since the death of their pagan prophet.

Oh yes, let us all cry out right here and now for the restoration of sharia, the return of the marvelous caliphate, and all the rest of those fantastic rites, rituals and practices (rapes and sexual abuses) that define the essence of pagan Islam. Islam is a lie from the pit, and in the end will be returned there!!! Deep six any dialog on sharia or the caliphate!!!

My Shariamour — Winds Of Jihad By SheikYerMami

[…] other racial groups.”–more – found on page 70 of this document.Looks like a movement:Illinois: Muslim Leader Calls for Sharia to the Chants of “Allah Akbar”!! ~ VideoEgyptian and Yemeni Islamic Leaders Call for Sharia in front of Massive Crowds! ~ VideoIslamoPUNK […]

Tunisia Shows NYC Their Loyalty: Muslims are not here to assimilate, they are here to dominate! | Stopping the spread of Sharia in America

I have not the patience for children who will not eat.

100′s of Chicago Muslims Take to the Streets to Honor Their Perverted Prophet! ~ Video | Logan's Warning

[…] would shake the world. The first being that Muslim armies unite , and the second, the call for Sharia Law to the chants of Allahu Akbar. This was another classic example of how Muslims selfishly plot to destroy non-Islamic countries […]

Hizb ut-Tahrir is a fringe group in the scope of American Islam.