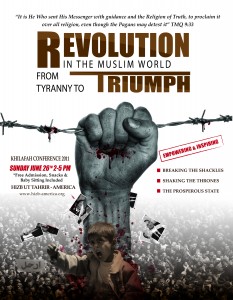 Tonight we get to take another look at the insidious Islamic movement that it taking place in America. This is the second video that is posted here from the Hizb ut-Tahrir America’s, June 26Th Khilafah Conference 2011. In the first one Muhammed Abu called for Sharia Law to the chants of “Allah Akbar”. In this video we see Abu Attallah call for the Muslim armies to unite. Also calling for an Islamic dress code and no free mixing between men and women. At one point he mentions “Sheikh Obama”. He probably meant Sheikh Osama, but that is some slip up. Why would he have Obama on his mind during an Islamic conference? This part can be viewed at the 5:50 mark. But please take the time to watch this very important video. These people are out to destroy America as we know it, and our government is allowing them to plot in our backyard. If it were up to me they would be charged with treason, locked up, and deported if possible.

Abu, I will not rejoice if Islam dominates the world. I will never submit to Islamic rule, and there are millions of other Americans who will not either. Are you willing to lead the movement to try and kill us? Do you have it in you?!