Recently an anti-Islamic friend sent me a message on Twitter, to show me a ridiculous statement that was made there by MuslimRepublicans.net. Their statement was an IslamoCON reply to a question about Sharia in America. 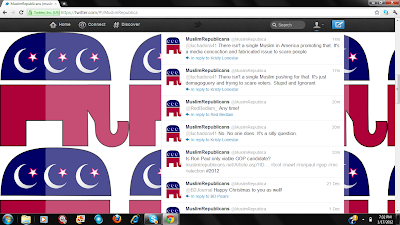 After I saw that reply, I contacted them and got into a short debate with them on the issue. They did a terrible job, ran away, and quickly deleted the comments. But just from the picture above, we see Muslim “Republicans” cannot be trusted.

As usual, I will send the link to the Islamic infiltrators.

Excellent work. You are in good company.
See a piece by Jerry Philipson about the Canadian Shafia honour killings:

IMAMS LIE TO CANADIANS ABOUT ISLAM

…thirty-four Imams from Canada and the United States issued a fatwa …
saying that these things had no place in Islam ….

Those are lies, blatant, deliberate lies.

We all need to be forthright about deception.

You have given us an “excellent pattern” of conduct to follow.

Congratulations and many thanks.

The lie as it exists is indifferent– ripe for dismissal.
It only becomes a weapon when it is believed.

[…]  Logans Warning  contacted them and got into a short debate with them on the issue. They did a terrible job, ran away, and quickly deleted the comments. But just from the picture above, we see Muslim “Republicans” cannot be trusted. […]

Submission to allah, subjugation to other muslims, denigration for women, lies for all.

If they don’t want it, why do they continually oppose laws to prevent sharia in the US?

The very best question to ask at this period. If these Muslim immigrants are not colonists, then why indeed do they want to short-circuit any attempts to prevent the domination of our legal system by the creation of a counter-system based only on Muslim and Arab tradition?
Again, the conflict is between West and East, and the line between them is something most people are not taught to perceive any more.

We had a rally in Melbourne last year opposing sharia law. We were opposed by a very large, violent crowd of socialists and muslims. The following day, the Islamic leaders claimed we were only trying to cause trouble for muslims as no muslims in Australia wanted sharia law. Of course we were accused of being racist. The following day it was revealed the same leaders had forwarded a submission to parliament demanding the right to operate under Sharia law. What a joke, they have been living under many aspects of Sharia law for years. They do not want to acknowledge the laws of the land.

Yes, they did run away, and they did lie. Of course, they’re allowed to lie to further their agenda, but we see it for what it is. A totalitarian political theocracy that can’t stand on its own two feet. Love your website, Chris!

First thing you have to remember is that Muslims are the biggest liars in the world. Next thing they’ll be telling you is that “Islam is the religion of peace.”

Be careful for those Muslim Suicide Bombers. They’re truly deadly. Muslims will tell you that committing suicide for Islam isn’t Islam. But don’t believe them.

Islam is the only religion that approves of Suicide Bombers. Just think: if it weren’t for Islam, we would not have ever heard of suicide bombers.

luchadora 41, I like your handle. I’m sure you know that it means “female fighter 41.” Does that mean you’re 41 years old?

P.S. Sheriff Joe Arpaio is holding a press conference on March 1, 2012. I predict that the good sheriff will tell us all about the criminality of the Muslim Barack Obama on that day.

Chris… sorry so late to this conversation, but I just received in snail mail today literature from Martin Mawyer, President of Christian Action Network, which is pertinent to this subject.

Mr. Mawyer points out a recent headline in The Washington Times which reads: “Sharia in America’s Courts…. Koranic Law: Coming to a City Near You”.

In this mailing, he points out that, in New Jersey, a muslim woman was beaten and raped by her husband, but the court denied her a protective order because “wife-beating” and “wife-rape” are allowed under Sharia Law.

And that a Christian woman in Florida was fired from her job for eating a bacon sandwich because it offended a muslim co-worker.

A Florida judge decided that a conflict among two muslims can be decided by using Sharia law, instead of US law.

A California muslim woman lost custody of her children after a state court ruled that Sharia Law only allowed the husband to have custody.

A New York man beheaded his wife because she wanted out of an abusive marriage. His lawyers defended him on the grounds that the killing was allowed under Sharia Law. Thankfully, he lost, this time.

In a glimpse into what could be coming to America, Martin points out that in England, a court ruled that Christians could not sing hymns in their church because muslims nearby could hear it and were offended.

And in another case in England, muslims sued because they were offended by the smell of bacon from a nearby cafe.

In 2010 more than 600 Sharia complaints were lodged with the Equal Employment Opportunity Commission demanding rights like not wearing hairnets, refusing to wear American uniforms, and demanding prayer rooms — all for the convenience of muslims.

Thanks Chris, for all the work that you do on exposing Islam and its threat to our way of life.

Thanks to you for posting that vital information.

1. Our laws are not cut out for this war, and they have been turned into a tool for Islam.
2. One demand leads to another, one aspect of Sharia seeping into our society leads to another. That is why they should not be given an inch.

This video ties right into your information. (From April 2010)

Muslims are making unreasonable demands in Western countries as a form of harassment and the pleasure of seeing educated Westerners bending the knee to silly demands by ignorant Muslims, who have never experienced the luxuries they are experiencing now in the West.
The bacon problem keeps cropping up but in some Muslim countries (not Saudi or Iran) bacon is sold in supermarkets and women do not have bleach thrown at them or spat at if they wear Western clothes. The very worst of Islam has settled in the West and the Muslim countries must be laughing at us for taking seriously the rantings of ignorant imams who are ignored in their own Muslim countries.

Ravi Zacharias, the emminent apologist on ” Just Thinking ” encourages us to think. Brigitte Gabriel is thinking. However her thinking is wishful thinking. If you really think about moderate muslims, where were the multitudes of thinking moderate muslims on 9/11 and there thinking outcry. If however there are thinking moderate muslims?, then maybe they should strive for reformation, Martin Luther Style. In the meantime thinking Brigitte Gabriel with a muslim thinking cap on, would do well to take it off. Afterall she lives in America. STOP ALL MUSLIM IMMIGRATION AND DEPORT MUSLIMS CHARGED WITH A CRIME, INCLUDING RAPE OF WHITE GIRLS AND HONOUR KILLING,ect.ect.ect.

[…] my recent Internet travels in which I was searching for Muslim propagandists to expose, I replied to the following Tweet from the Muslim Propagandist Affairs Council. Also known as […]