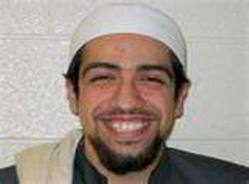 Although the population of Muslim students is growing, there are only about 30 Muslim chaplains at colleges across the country. This semester, the University of Michigan became the first public university with an endowed position for a Muslim chaplain.

“Muslims need to rely on somebody through times of hardship,” says Mohammed Tayssir Safi, who was recently hired to serve as the university’s Muslim chaplain.

How about they rely on their family, friends, and/or a regular student counselor?

Safi will help an estimated 1,700 Muslim students maintain their beliefs on campus.

Therein lies the problem. Islam does not assimilate, it ends up dominating.

The transition to college can be a difficult one for Muslim students who often come from tight-knit immigrant communities centered around mosques. Keeping their faith can be challenging since college life glorifies alcohol and premarital sex, which are forbidden by Islam.

At a gathering of Muslim students at a Middle Eastern restaurant Safi says, “There’s not a solid environment where a Muslim feels, perhaps, safe is the right word. Not from violence, but safe as in they feel safe and at home in being able to express themselves and who they are.”

That is because Islam does not belong in America, and they should not be catered to at all. If they love Islam so much, they can move to an Islamic country.

Although he’ll work with students, Safi’s salary won’t be paid by the university.

“The university is very supportive of the idea, but they can’t lend even a penny towards the cause because of separation of church and state,” says Chris Abdur-Rahman Blauvelt, chairman of the Michigan Muslim Alumni Foundation.

Blauvelt reached out to fellow alumni and parents for donations through a crowd-funding campaign and raised $30,000 in a matter of months.

So the university couldn’t pay for it, and Muslims go out and get their own funding. What else should they be allowed to bring onto the campus? Maybe an Islamic enclave? When does this slow suicide end?!

17 comments for “First US Public University Muslim Chaplin is on the job!”