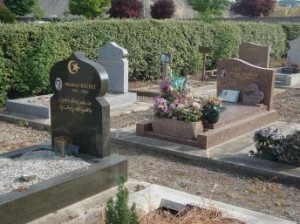 The slow suicide of the West continues, as does the endless list of Islamic demands. This time France has foolishly allowed Muslims to have their first Muslim-only cemetery. Now Muslims will demand more cemeteries like this, and also move onto other demands. It is crystal clear that the West is changing to suit Islam. The question is, will the West grow a spine and reverse the Islamization process before it is too late?

Check out the spin the author puts on this news. “Integrating”. More like taking over.

STRASBOURG – France has opened the first Muslim-only cemetery in the northeastern city of Strasburg, a move hailed by Muslims as a step toward integrating one of the country’s largest minority group.

The cemetery’s opening is a “historic” moment for Muslims in France that is “an important symbol of belonging” for the community, Mohammed Moussaoui, the head of the French Council of the Muslim Faith, told Agence France-Presse (AFP) on Monday, February 7.

A host of local officials and Muslim leaders attended the opening of the cemetery, which has space for about 1,000 graves.

The cemetery, which cost around 800,000 euros, faces Makkah, has a room for washing before prayers and a separate prayer room.

← CAIR Applauding Minneapolis & Sharia on Facebook!
First US Public University Muslim Chaplin is on the job! →