In this second segment to the “Muslims Occupy Wall St for Friday Prayer! ~ The Sermon in the Street ~ Videos” series, we start off with the wanna be Sharia police. As they surround the perimeter to protect “the sistas”.

Next up: The introduction. This is something we do not need to hear on the streets of NY!

Imam Baqi steps up to the plate (Actually that is an insult to baseball. As baseball is all-American, and Islam is as anti-American as it gets. Sorry.) to deliver the IslamoCON, and play the victim card. He also goes on the attack against the NYPD, “fundamentalist Christians”, and Zionists!

As for Mohammad, here is one example of how he implemented Islam.

Wait Imam, I have more.

By Mohammad’s words we can see that he did not care that his men raped women, nor did he care if the women were impregnated by their rapist. What a guy. This is the man that NY’s Imam Baqi calls “a most beautiful patten of conduct”, and he calls for Muslims to follow the examples of Mohammad. Should this Imam even be allowed to preach this hatred on our streets?!

For those new to the subject. Here is a Koran verse which instructs Muslims to follow the example of Mohammad the warmonger, and rapist.

Koran verse (ayat) 033.021
YUSUFALI: Ye have indeed in the Messenger of Allah a beautiful pattern (of conduct) for any one whose hope is in Allah and the Final Day, and who engages much in the Praise of Allah.

Unfortunately the Mohammad loving Imam was not done yet.

Baqi, NOTHING that has happened in the past, means non-Muslims have to let Islam take over America. We owe you and Islam NOTHING! Got it?

As you saw, Baqi stated “some of you are racists”. Well, the fact is that the Imam was the only one who brought up color. Take a look in the mirror Baqi. Additionally he leaves out the fact that Islam does discriminate against other religions.

After the sermon, even more Muslims crowd into the area to pray.

Now, what you have all been “waiting for”….

Please ask yourself. Why didn’t we see Muslims praying in the streets of America even a decade ago? They are doing it because they are making a statement of power. The reason they are getting away with it, is because the country is in the state of weakness, because of politically correct disease. It is our job to change that!

Please do not tip this doorman on the way out. 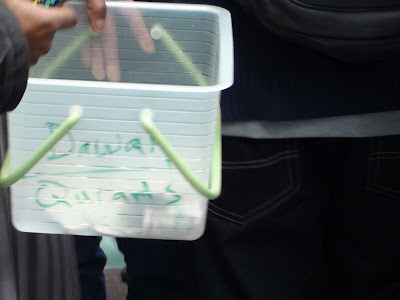 Please support the Logan’s Warning team, so they can continue to report the news the mainstream media will not touch. $10 – $20 is not going to kill you, but a knife in my back at one of these events might kill me. (Lets hope that doesn’t happen) A donation can be made today on the site via PayPal. Or a check or money order made out to “Christopher Logan” can be mailed to:

Coming up next: Did Imam Baqi threaten the infidel team?!

42 comments for “NYC’s Occupy Wall St: The Sharia Police, the Imam’s IslamoCON, and the Prayer…”