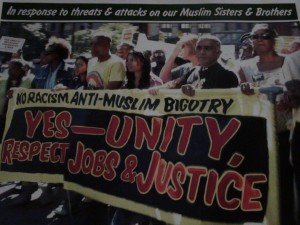 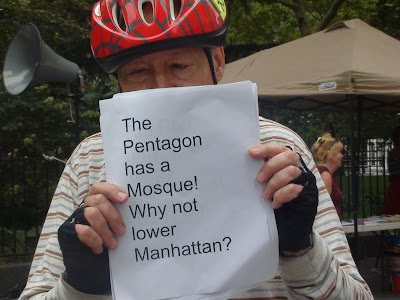 That’s because they’ve never had an original thought in over 40 years. The LSD really fried their brains.

Maybe I could not hear this as well as I should, but it seems to me that almost no one joined in with her chants.

Socialism is a mental disorder. There can be no other explanation.

everytime i here a muslim say alla the merciful i see pigs blood.

Well, grab it and throw it at them.

Just remember that everything in pislam is backwards so just interpret it to mean the opposite.

[…] two parter on his experiences on his way to attending the Freedom Rally. Part I is here, Part II is here. The stupidity of people never ceases to astound […]

When the s**t hits the fan and muslims are attacking America, all these whiners will be looking to right-thinking individuals with guns for protection, but when that time comes, they must be left to live with the decisions they’re making today.

Muslims don’t know the meaning of the words, “mercy”, “love”, “compassion” or “peace”.

Chris, where do you find all these loons? LOL!

Muslims are poor because they’re always warring against the infidels, and against each other. Muslims love going on a killing spree. Just witness the Muslim Middle East. It’s hell and all bedlam there as I write. Muslims love making war instead of growing crops. So that stupid lady is wrong to say that we Americans are at fault for 9/11.

I think there are many Americans who r against radical Islam in the US, but we r not organized. We need someone to network us so we don’t feel so powerless and stifled.

Welcome to the site Bob!

Thanks to people like Chris, Jarrad Winter, Wild Bill, and Melanie we are getting there Bob!

Chris,
.
You have way too much of patience & open-ness. Imagine, would a Muslim even tolerate *thinking of drawing insulting cartoons*? And here you are, right among the hate-mongers and cool-ly filming & recording.
.
God Bless you & God Bless America.
.
MN

I’ll take that as a compliment. 🙂 Wait until you see tomorrow’s videos.

OK; I get it now. Osama bin Laden was so miserable in his $25-$30 million inheritance that he lashed out at the rest of the world by building Al Queda and causing mass death over and over again. Makes perfect sense now. This must mean that 90% of the rest of humanity is even more dangerous. Allah must be the poorest of all and most to be pitied.

Do you think, for even one minute, that Muslims would be carrying out violent Jihad against the West if their people were wealthy?
Saudi Arabia is wealthy, yet more than half the 9/11 hi-jackers came from there!
Leftists blame the West for the supposed poverty of Saudi Arabia– you can see the case makes no sense.
The most well-heeled Muslims are those who are first in the jihad against the West.
The schoolchildren at Beslan were raped by Sufis who came from a comparatively comfortable Muslim country.
So much for mysticism.
So much for wealth.
The individual remains morally responsible for his own actions.
And Muslims, with goading from their violent scriptures, carry out terrorism.
Not all terrorists are Muslims, but all Muslims do worship the bringer of terror and benefit from terror.
They fat themselves at the trough of our suffering and believe that they will pay no price for it.

Is that Bill Clinton hiding behind the “Mosque in Pentagon” sign?