On Thursday a friend and I attended the NYC Walmart City Council meeting, which also had a Pamela Geller organized anti-Ground Zero Mosque rally taking place outside. 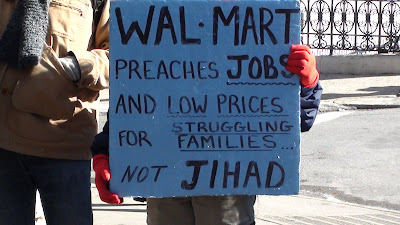 (Some of the opposition party) 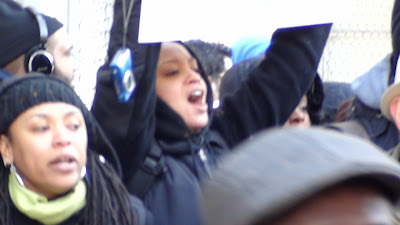 Besides going to these protests in a show of support for our cause, I also like to attend them in an effort to engage in discourse with the opposition. So I mostly stayed on the side of the street with them, and I immediately saw my three “friends” who tried to intimidate me at a recent ACT! rally. As usual they could do no better than spew their venom.

One lady said that if we do not allow the Mosque to be opened Muslims across the world will be angry with us, and then a few others chimed in saying it is not even a Mosque. It is nothing more than a “community center”. I stayed silent until a man behind me said he supports the Mosque, and at the same point one woman said the Mosque is not “extremist”. In response I asked him why he supports supports it. He said because it was not the “people” who destroyed the WTC. I told him maybe, but Imam Rauf has admitted he for Sharia Law. The man replied that he supports their right to open it. I then asked why he supports Sharia Law which is unconstitutional? He said he doesn’t, so I said but you are by supporting the Mosque which is pro-Sharia. He just looked at me and went silent.

Listening to the conversation one woman spoke up and said that it’s only extremists who want that (Sharia). I mentioned to her that Sharia is part of Islam. Her response was that Muslims are speaking out against “extremists”, and told me I have to Google some New York Times article. At that point I asked her to name just one Mosque which has condemned Sharia. Her answer was “well Muslims are not calling for it”. When I pointed out the fact that Muslims are calling for it across the West, and that the UK has at least 85 Sharia Courts already, she softly said “I don’t know” and walked away. The final comment on this topic was from an aggravated woman to the right of me who asked why I was even talking about this. After I told her that other people had brought the subject up, and there is a thing called freedom of speech she just turned around and ignored me. I know the odds are against it, but hopefully a seed has been planted.

21 comments for “Opposition Spews More Hatred Towards Me and Geller~ Video!”