They may not be as boisterous as they used to be, but Revolution Muslim’s Sharia movement is alive and well. The group’s activities all operate within the law, telling us loudly & clearly that OUR laws are not cut out to fight Sharia law’s growing threat! 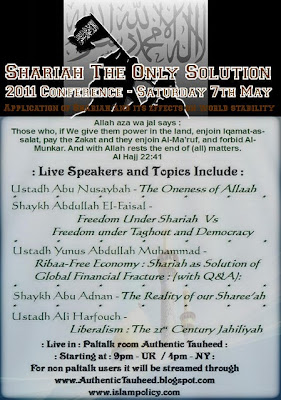 Thanks for the repost!

SHARIAH is the only solution if you want…

… Honor Killings even for flimsy excuses such as daughters failing to wear a Muslim rag on their heads. Also, for becoming too Westernized.

… lashing old women for even flimsy excuses such as being alone with a Muslim dude.

… the practice of polygamy and hypocrisy. Some depraved Muslim males very often have more than four wives. Polygamy in a civilized world is called legalized adultery.

… all sins legalized. In backward, Muslim Third World Countries, all sins are legalized.

… beheading or hanging homosexuals and lesbians.

… petty thieves, male and female, to have their hands, feet, and eyes gouged out. Muslims have this law because Muslims sadists want this law. Also, because Mad Pig Shariah demands this cruel practice.

Animals also suffer under these barbaric laws. In the UK some Muslims were prepared to stun animals before slitting their throats sharia style. Imams protested. Muslim butchers in favour of stunning said that stunning animals was halal as the animals revived after the stunning and then had their throats cut. Muslims refuse to be deprived of their need to see others experience the utmost needless cruelty. If you are a Muslim, for godness sake don’t let the imams who dictate to you ever see you take the most compassionate route towards animals and non-Muslims.

If they want Sharia so much, why don’t they go back to the sandbox they’re coming from… No barbaric medieval sharia in UK.

Umm…does anyone on this site know any Muslims personally? Dealt with them socially or in business? I have. They’re not like this. Also, if they were lying…how do you get 1.5 billion people to all lie the same way?

And another question: Can you back up your claims with textual evidence? As in, can you go back to religious Islamic texts that say these things? I just feel like your site is lacking some legitimacy.

I know Muslims, and knowing them does not lower the threat of Islam. Let me know when the Muslims you know take to the streets and condemn Sharia Law.

If you would have actually read through the site instead of just trying to discredit it, you would have seen the Islamic texts are quoted in article after article.