Here is a collection of videos made by RevolutionMuslim.com and the Islamic Thinkers Society. Their words speak for themselves.

NYC based RevolutionMuslim.com has made a 911 statement. In this video Younus Abdullah Muhammad calls America “the world’s biggest cancer”, and tells his fellow Muslims not to feel bad about the victims of 911. Near the end of the message he says that this is a message of peace.

NY Based RevolutionMuslim.com Bashes Death of US Soldier

In the past the Islamic hate preachers who run RevolutionMuslim.com have called for Muslims to confront troops during Fleet Week in NYC. This time they are calling a US soldier who recently died stupid and a coward. I wonder if the RevolutionMuslim.com crew would have the guts to go to Afghanistan and challenge our great troops? Nah….of course not.

Here is what is posted on their site. 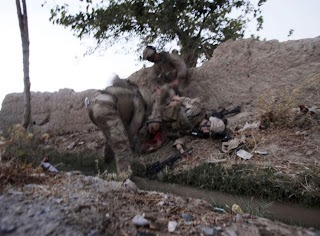 In this photo taken Friday, Aug. 14, 2009, coward Lance Cpl. Joshua Bernard is tended to by fellow coward U.S. Marines after being hit by a rocket propelled grenade during a firefight against the Taliban in the U.S.occupied village of Dahaneh in the U.S. occupied Helmand Province of Afghanistan. Bernard was transported by helicopter to Camp Leatherneck where he later died of his wounds & stupidty.

May Lance Cpl. Joshua Bernard RIP, as for RevolutionMuslim.com they will burn in hell one day.

NY Muslims:Allah is About to Destroy Them for Their Transgressions~Video

This is the second video from this past Friday’s hate sermon from NY based RevolutionMuslim.com. According to their spokesperson, Allah is about to destroy us and Israel was once Muslim land which none of should be given to the Jews.

NY Muslims:Ramadan is a Time of Jihad, the Jihad

As I search the Internet for articles about Islam, I have recently seen numerous articles about Muslims and Ramadan. The articles are written to try and put a positive on Islam and Ramadan. What the articles do not tell us is that Ramadan is also a time of jihad . Please watch the video to see the spokesman for RevolutionMuslim.com explaining this and angrily calling for Islamic dominance.

Apparently our authorities just do not care that the NY based members of RevolutionMuslim.com call for Muslims to prepare weapons as the Koran tells Muslims to terrorize non-Muslims. So they are allowed to continue to preach and here is this past Friday’s hate sermon, in which the RevolutionMuslim.com spokesman rants that Sharia Law has the solution for all of mankind’s problems. He also calls for the extortion (jizya) of Jews and Christians. It is funny that if a Mafia member called for extortion he would get locked up, but when a Muslim does it is OK. Oh I forgot, most of our authority figures are afraid to face the threat of Islam.

NY Muslims:Koran Says to Terrorize Them, so we Have to Prepare Weapons~Video

This post is the second part of last Friday’s hate sermon from the NY based RevolutionMuslim.com. Since the authorities have done nothing to stop them from preaching hatred, they are pushing their right to free speech further and further.

For the record, the Koran does say to terrorize non-Muslims. Here is an example.

For those that do not have the time to watch the entire video, please watch it from the 7:00 mark on.

NY Muslims:The Cross Will be Broken, all Will Have to Convert~Video

Here is a video of this past Friday’s hate speech by the NY Muslims of RevolutionMuslim.com. This week their spokesperson kindly tells us that the time will come when the cross will be broken and non-Muslims will have no choice but to convert to Islam, as Sharia Law will rule the world.

Abdullah as-Sayf Jones, the newest spokesperson of the pro-jihad, pro-sharia organization RevolutionMuslim.com, has made a video statement about the recent arrests of Muslims in NC. In the video the usual Muslim victim card is played.

We at RevolutionMuslim.com have stepped to once again be the voice for those Muslim prisoners who have had their voices suppressed. The three men of the Boyd family have been illegally and unjustly arrested and abused in North Carolina.

This is part II of this past Friday’s hate speech from NY based RevolutionMuslim.com. Islamic hatemonger Yousef al-Khattab and his crew are getting more and more brazen with their message.

Here is part I in this past Friday’s hate speech from NY’s RevolutionMuslim.com’s spokesman.

In this video he admits that Allah is out to destroy Western civilization and claims that even non-Muslims will benefit from Sharia law. Then he, like American Somalian Al Qaeda leader Abu Mansour, tells Muslims not to accept President Obama.

Here is the 2nd video from this weekends street sermon by NY Islamic hatemonger Yousef al-Khattab and Co. In this video the group’s spokesman says that it is mandatory for Muslims to collect jizya (extortion) from non-Muslims. He also blasts our brave soldiers in Iraq by saying that they are shooting the Iraqi parents and repeatedly raping the daughters. Yet American Muslims continue to line up in support.

Here is new video from the NY based RevolutionMuslim.com group. Watch how American Muslims line up (children included) to donate and receive CD’s and literature from this pro-jihad, pro-Sharia Islamic hate group. Unless we speak up and force our politicians to take a stand, more and more groups like will be seen across the country.

The pro-jihad NYC Muslims from RevolutionMuslim.com have combined forces with the UK Islamists over at SalafiMedia.net.
In this video RevolutionMuslim.com calls for US Muslims to follow the lead of their brothers in the UK and that non-Muslims should find harshness in Muslims. He once again admits that Islam calls for our dominance. Is that clear enough for us yet?

Mark my words, it is just a matter of time until Muslims across the West unite and say that our man made laws have no authority over them and that Sharia is the law of the land.

It is time to sign the end Muslim immigration petition.

In the past I have posted videos from NY based RevolutionMuslim.com. In the last one they preached for Muslims to understand the terms of engagement in jihad. Now they have stepped up their rhetoric and stated that Muslims need to use “your limbs, your bodies, their weapons, to promote the religion of Allah” and then finally a straight out call to “attack” the kafir. This man is obviously dangerous and needs to be locked up. 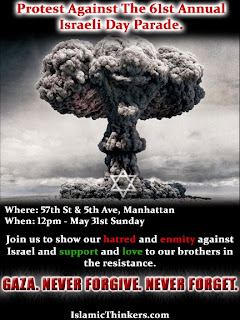 This past weekend the NY based Islamic Thinkers Society crashed the Israel Day Parade in Manhattan. Keeping with their past track record they spewed nothing but hate while calling for the destruction of Israel. Being the scholars that they are they even came up with a “beware, beware, pedophile Rabbis everywhere” slogan. At the end of the video there is a lovely message for all of us supporters of Israel.

Here is their platform.

* They were shown no respect for the vermin they are.
* All those who support Israel are enemies of Islam.
* All Zionists must leave Palestine before any talk of negotiation can be held.
* Germany should compensate for the Jews, not Palestinians
* If American government loves Israel, they should make Texas the Israeli State.
* There is no Two-State Solution
* May Allah grant victory to the legitimate resistance of Palestine.

Lead by ex-Jew Yousef al-Khattab, the Muslims of RevolutionMuslim.com spent another sunny afternoon spreading their Islamic propaganda on the streets of NYC. This time al-Khattab and Co. called for Muslims not to assimilate and to love that Sharia law will dominate the earth. They also preached for Muslims to understand the terms of engagement in jihad. Him and his group appear to be preaching in front of an exit of an NYC Mosque and towards the end there is an interesting confrontation with another Muslim.

US Muslim Site Calls for Muslims to Confront Troops in NYC 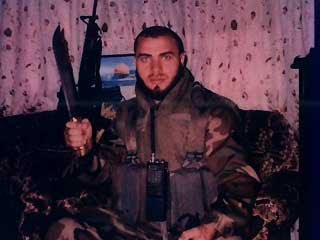 Picture was previously on Revolution Muslim.

On May 16Th we saw the “American Muslims hit NYC Streets Calling for Sharia and Jihad” video. This Memorial Day weekend the same NY based Islamic website RevolutionMuslim.com is calling for Muslims in Afghanistan and Iraq to “address” our troops over the two videos posted below. The site’s owner Yousef al-Khattab, who is an ex-Jew is also calling for Muslims to confront our troops during Fleet Week in NYC. While I do not think that our soldiers should of made these videos, I will applaud them for one thing. Which is not bowing down to Islam like our government does.

Here is what Revolution Muslim had to say, along with the two videos.

It is Fleet Week in New York City, please watch the videos of the USA occupation troops in Iraq and Afghanistan. Pass these videos out to brothers and sisters in Iraq and Afghanistan and the Gulf Nations as well. Here you will see the real Bart Simpson “USA Culture“ of today in practice. I want to speak to the troops about this, and insha’Allah I ask all of you to address them as well. Please be civil and always use the Islamic methodology. P.S. Now I understand why the occupation troops walk in small platoons in Manhattan.

American Muslims affiliated with the NY based Islamic site RevolutionMuslim.com take to the streets of NY. Their leader openly supports Sharia law and the call for jihad. To top it off their location appears to be only blocks from Ground Zero. It looks like Broadway near City Hall. 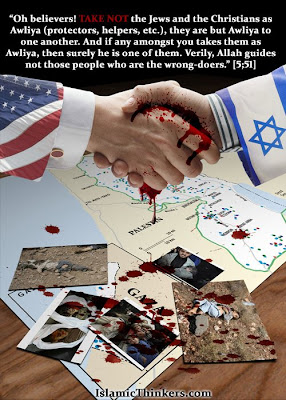 By Christopher Logan
As we can see by the picture the NY based Islamic Thinkers Society is once again spewing their hatred of non-Muslims. As they are calling for Muslims not to befriend Jews or Christians. But they did not just come up with this line of thinking out of thin air. It is commanded from the Koran verse 5:51, which tells Muslims not to be friends with Jews or Christians.

This is not the first time that they have spewed their hate. In 2008 they attended the NYC Gay Parade which was held in pouring rain. At one point they tell a gay man that he has to learn how to interact with people. But later in the video while chanting Allah Akbar they call on Allah to strike the gays down with lightening.

Later during the parade they call gays inhumane animals and at the end of the video they try to make it like they are doing the gays a favor by preaching to them.

In 2006 this same group held a rally in from of the Israel consulate in NYC and chanted that the “mushroom cloud is on its way” and the “real Holocaust is on its way”. At end of the hate fest they tell the FBI, CIA and HLS to “burn in hell”.

Back in 2005 the ITS took to the streets to trample all over our flag while swearing their allegiance to Allah.

Once again we see American Muslims causing the same problems that Muslims are causing across the world. What Islam brings to the world is hate and division.

9 comments for “Video Collection of NY Based Islamist Groups”