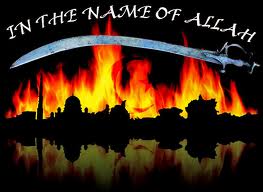 I am sorry to report a second occasion this week to announce yet another “coming soon” event in which non-Muslims are taking arazor blade to the veins of life as we know it. As soon as the Islamic community feels they have have used their non-Muslim supporters for all they are worth, they will instill the final cuts! Following in the footsteps of the NY Public Library, the Met is proudly in the process of putting together a massive Islamic art show.

The Metropolitan Museum of Art is in the final stages of a US$40 million expansion. The project will introduce 15 new galleries to display art of Islamic cultures from the Iberian peninsula to India.

The Met puts the number of Islamic objects in its collection at some 12,000 – including 78 manuscript pages from the magnificent Iranian Book of Kings, or Shahnama, and the finest holdings of Islamic textiles in the West.

“It’s exceeded in numbers by the British Museum and the Berlin Museum for Islamic Art,” says Sheila Canby, the curator-in-charge who heads the Met’s department of Islamic art, “but those collections are formed of huge numbers of archaeological finds. The premise is a bit different here. We are a museum of art. Things have been collected in order to be shown, and not just as research material with drawers and drawers of shards.”

About 1,200 works will be on view in the new galleries at any given time, a fraction of the total holdings.

Nevertheless, it represents a huge increase over the 60 pieces exhibited on the balcony of the Met’s Great Hall during the eight years that the wing has been closed for renovation.

The New York museum has owned objects from the Islamic world since the 1890s. For decades, their place within the museum’s collections shifted – literally – from one gallery to another.

The Met, a private museum that gets a fraction of its annual budget from government sources, opened its galleries for Islamic art in 1975. A steady flow of visitors began. Then in 2003, the museum emptied that space to build Greek and Roman galleries beneath it.

With the reopening planned for 1 November , final touches are being applied before the art goes in.

Canby explains: “There’s a growing realisation that the Islamic world is larger than the territories that are covered by our collection, so we wanted to be accurate about what we are showing and where what we’re showing comes from.”

That’s the root of the problem! Islam is taking over more and more of the world’s population. Here in America, the Met promotes Islamic culture instead of ignoring it or even having displays that would show just how forcefully Islam is a religon/ideologyhellbent on world domination!

Hence a new name. “Above the door you will have the words, ‘Arab Lands, Turkey, Iran, Central Asia, and Later South Asia’. And, believe it or not, it does all fit,” says Haidar.

Inside the building, the acronym is a mouthful – ALTICALSA. To the side of the door, says Haidar, will be a map called The Islamic World.

The galleries take the visitor through time, patrons and geography, with portals conceived to favour cross-cultural perspectives. You’ll be able to go from a display of objects from the early caliphate into adjacent galleries exhibiting Orientalist paintings from 19th-century Europe. Non-Islamic objects from India that were made under Islamic rule are part of the wing and will have a separate entrance.

I wonder if they will show objects from the Islamoslaughter of the Hindus of India? The horrific event was dubbed the “Hindu Kush”. Of course the Met will ignore all of tha.

Thanks in advance for making your displeasure heard!

Hi Chris,
Hindukush is the name of a mountain on the North-Western border of India (ancient India). The Wiki article suggests that the name actually derives from Killer of Hindus – in the sense that the cold clime of the rugged mountains killed millions of Hindu slaves that were taken by the Islamic invaders of yore.
And, I can assure you they will not mention any of it (though, I do understand the sarcasm in your question).
I blame this senseless path to suicide & self-inflicted genocide on the West on one very pathetic soul named Mohandas Karamchand Gandhi. That filthy animal & his asinine thoughts of so-called Non-Violence is what is leading the vast majority to “tolerate the intolerant” & “defend the discriminators”. Add to that the sense of guilt resulting from the aparthied & racism – the majority of Western people are bending over backwards to support this backward ideology of Islam.
Remember the Westerners did not support the backward ideologies of the Hindu religion – and they took all steps to get rid of it (even though those Westerners were the imperialist racist swines of the British East India company that discriminated against my very own ancestors). I think we need to give credit where credit is due.
.
It’s time the filthy spineless a-holes of today stop this self-imposed stupidity – don’t mind even if they were to degenerate to the imperialist racist swines – don’t mind if I’m attacked for the color of my skin (brown) – it’s far better to live under the imperialistic aparthied weilding swines that to be consumed in the barbarity of sub-human Islamic zombies. For, in the former scenario, there is some hope that the swines might see reason; in the latter, there’s only insanity, bloodshed & mayhem – a la Allahu Akbar style.
.
I apologize if my references to Englishmen of the British East India company & to the general population of Westerners hurt some of the readers.
.
God Bless America & God Bless the brave souls (irrespective of skin-color, religion & social-status) that are figthing this battle against irrational, fear-inflicting death-cult asking for submission of our rational faculty to the satan-incarnate.
.
MN

Pislamic art are as ugly as the music is that happens to come out of those lands. There are some forms of metal music that is also a bloody racket but still I prefer that to the oriental pislamic music. Once they have conquered the west they will destroy all the immortal art that is our common cultural heritage. Thus they’re going to burn all the Rembrandts, Vermeer, Mona Lisa and such as it is haram in pislam to depict human forms. So all that stuff will have to go. And western music is deemed as the devils tool to make arselifters stray of their path to allah. So all that stuff will have to go as well. Just a reminder of what is really at stake her. Countless millions of kuffar will be exterminated and persecuted but it is almost worse to lose our cultural heritage forever.

When I see things like this it forces me to see just how foolish and stupid our leading citizens have become. They in fact are not leaders at all, but traitors living in a blinding stupor unable to recognize night from day. 40 mil dollars on this junk, and then we hear them wine “not enough being done for the poor” or some other such hypocricy. It’s not enough we have to bear this trash, but pay for some of it with our tax dollars too. Makes me feel as if someone just took a crap on by doorstep and stands there expecting me to eat it.

Another thing I doubt they’ll show are images of Muhammad, since Muslims get so offended by that. Still I wonder what this artwork will include.

You’re planing to do a story on it?

It does not open until November 1st, but I plan on dropping by shortly after.

Will Israel be included anywhere on that arabic pislam world map?

How much of history will they erase? All of it that does not benefit their ‘kill the infadel’ agenda….

You would be AMAZED at what I have, in the past, mistaken for a public “comfort station”.

I wonder if they should mention all the other lands that they tried to make Islamic.
http://www.islam-watch.org/HistoryOfJihad/index.html

Gee, what a shame if a big fire broke out and destroyed it all….

Textiles with repeating patterns and swirly calligraphy of koranic verses is about the extent of it, given these strictures:

. . . shall I tell you what I heard from the Messenger of Allah, Prophet Muhammed (Allah bless him and give him peace) I heard the Messenger of Allah say, “Every maker of pictures will go to the fire, where a being will be set upon him to torment him in hell for each picture he made. So if you must, draw tress and things without animate life in them.”
And Imam Tirmidhi relates that the Prophet (Allah bless him and give him peace) said, “On the Day of Judgment, part of the hell fire will come forth with two eyes with which to see, two ears with which to hear, and a tongue with which to speak, saying, ‘I have been ordered to deal with three: he who holds there is another god besides Allah, with every arrogant tyrant, and with makers of pictures.”
And Bukhari, Tirmidhi, and Imam Nasa’i relate the prophetic hadith form Ibn Abbas, “Whoever makes a picture, Allah shall torture him with it on the Day of Judgment until he can breathe life into it, and he will never be able to.”
The reason for the unlawfulness of pictorial representation is that it imitates the creative act of Allah Most High, as is indicated by the hadith related by Imam Bukhari and Imam Muslim that A’isha (Allah be well pleased with her) said, “The Prophet (Allah bless him and give him peace) returned from a trip, and I had draped a cloth with picture on it over a small closet. When he saw it, he ripped it down, his face colored, and he said, “A’isha, the people most severely tortured by Allah on the Day of Judgment will be those who try to imitate what Allah has created,”

“On the Day of Judgment, part of the hell fire will come forth with two eyes with which to see, two ears with which to hear, and a tongue with which to speak, saying, ‘I have been ordered to deal with three: he who holds there is another god besides Allah, with every arrogant tyrant, and with makers of pictures.”

Go ahead. Just try to convince me that islam does not turn a person into a lunatic

“When he saw it, he ripped it down, his face colored…”

bet you they won’t allow sidewalk street vendors to be hawking hotdogs with pork….. or has that already been banned citywide by the EPA , or was it FDA due to high fat and salt content?

This is so sad!
Although I don`t live in the USA it hurts my spirit to see how far this evil religion/ideology is encroaching on the West!
In countries in Europe they are changing out of all recognition, so many problems with these people who have been allowed to emigrate to our shores!
Our leaders have got their heads in the sand,maybe this is part of God`s judgement and that is why this is being allowed to happen!