Earlier this month the website entitled RevoutionMuslim.com was shut down by US authorities after publishing a threatening message to the MP’s of the UK, who voted in favor of the Iraq war. 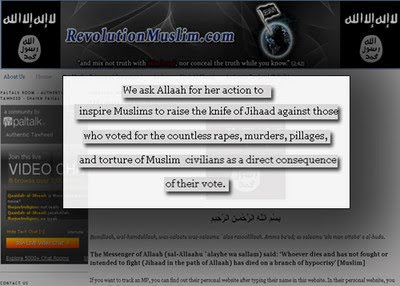 Their threatening message which calls for Muslims to kill the MPs, was posted right after UK Muslim Roshonara Choudhry, was sentenced to life for stabbing former minister Stephen Timms.

Since then another Muslim in the UK, has been arrested in connection with the threat. Bilal Zaheer Ahmad who is only 23 years-old has been charged with soliciting murder.

Of course Revolution Muslim which is led by Younus Abdullah Muhammad, has not given up in their efforts to create an Islamic USA though. They have started a new site called Islampolicy.com, and they are pushing an agenda to help Islam takeover America by using our way of life against us. This is nothing more than a smokescreen for them. This non-violent approach does not erase the true hateful nature of Yonus, and his crew.

Watch and see how Younus fully supports violent jihad, and the domination of non-Muslims under Islam. (Video is from 8/09)

Lets take a look at the “vision” of Islamicpolicy.com.

The following objectives outline the tangible activities IslamPolicy.com will attempt to manifest. They form the purposes of the organization and are arranged in chronological order of intention. Each is a rational activity derived from the overall philosophy and methodology of the organization.

1) To publish and promote written commentary and analysis on current events, global policy perspectives with regard to the events directly affecting Muslims and Muslim societies

3) To develop a regular radio show where current events, policy developments, and activist voices can be confronted and amplified with depth of discussion

6) To publish a magazine/journal dedicated to Islamic Policy perspectives

7) To promote the widespread distribution of such efforts into the community by printing, publishing and disseminating literature

8 ) To develop online academic curriculum and classes for critical, academic thought and conversation that may help to stimulate the quality and influence of policy analysis across the globe

9) To develop the Islamic Institute of Policy Formation, an Non-Governmental Organization devoted to policy analysis, formulation, promotion, adoption and implementation

Younus has also put together a treatise on the methods of his organization.

Here are some exceprts from it.

This treatise is to serve as the underlying methodology for IslamPolicy.com – It is dedicated to every hungry and oppressed slave of Allah presently suffering under the mental and physical slavery of manmade law and tyranny . From it we hope to contribute to the Islamic Awakening, and that it may blot out some of our bad deeds and serve as a positive weight for us on the Day when no man will answer for anyone but his self.

The religion of Islam represents perhaps the most comprehensive of all radical alternatives.Perhaps, quite logically, as a consequence it stands as public enemy number one today.

The religion of Islam (or shariah) is a complete paradigm.About one quarter of the world’s population claims Islam as their religion and it is practiced in diverse ways, but the Islamic way of life not only represents a religious call for each individual to comprehend the reality that they were in fact created (in opposition to Darwinist materialism), but as a result of that awareness calls on each and every individual to behave righteously and to work for justice in the world and with their lives as a consequence.In the Quran, Allah (the Most High) says,

It is He Who has sent His Messenger with guidance and the Religion of Truth, to proclaim it over all religion, even though those who associate partners with Allah may detest (it). (9:33). It is this verse that we emphasize heavily as it is in this verse that we realize the purpose of the Prophet Muhammad (saws), whom Muslims consider the last and final Prophet that Allah the only Creator will send to humanity.Allah informs us in His perfect book that Muhammad is a guide and that he (saws) was sent with the religion of Islam and the revelation to make it superior over all other ways of life. The phrase utilized here in Arabic is, ِ ﻦﯾﱢ ﺪ ﻟ ا ﻰ َ ﻠ َ ﻋ ُ ه َ ﺮ ِ ﮭ ْ ﻈ ُ ﯿ ِ ﻟ(liyudhirahu aladdini)… the verb ‘dhahira’, means to make manifest, and with the preposition here (ala) the meaning of the verse is that the religion of Islam was revealed to the Prophet Muhammad (saws) to overcome other ways of life (deeni).The word deenis most often translated as religion however the Arabic meaning is much more comprehensive and has its root conceptualization in submission to an authority and authoritative ideology that represents a complete way of life or social order.Therefore, a more appropriate translated definition fordeen should be ‘submission to Allah, the only Creator and Ruler in totality, under the comprehensive system that He has revealed and that is Islam’. This is why we say that thedeen of Islam is what believe in, live by, and die for; it is a complete way of life

The rest can be viewed below.

On Crafting Islamic Policy: the Methodology of Islamic Social Science

Don’t be fooled. Whether they are violent or non-violent, Younus and his organization are enemies of Western Civilization.

← Oklahoma Judge Sides With CAIR and Blocks Sharia ban!
Oklahoma Judge: Sharia Law is not Actually a set of Laws →