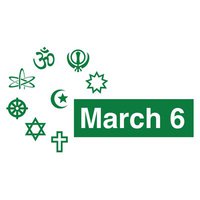 The massive division that Islam has brought to the UK, has come to America as well. This Sunday at 2pm we will once again see Muslims using our freedoms against us, to advance their agenda. To strengthen their position they will be using misinformation about Islam, to turn non-Muslims against non-Muslims.

“Today, I Am a Muslim Too” Rally

In response to the March 8th congressional hearings dubbed “The Radicalization of Muslim communities in America” led by Congressman Peter King (R-LI), members of diverse faith communities throughout New York City will join in unity and support of American Muslims.

Stand with us on March 6th to show Congress that we are all together, that we share friendship and trust and cannot be divided. Such hearings will send the wrong message, alienating American Muslims instead of partnering with them, and potentially put lives at risk by stirring up fear and hatred.

That is what their Facebook page states. But that is not the reality of what the Islamic scriptures state.

The scriptures clearly say that Muslims are not to befriend non-Muslims.

Koran Verse 003.028
YUSUFALI: Let not the believers Take for friends or helpers Unbelievers rather than believers: if any do that, in nothing will there be help from Allah: except by way of precaution, that ye may Guard yourselves from them. But Allah cautions you (To remember) Himself; for the final goal is to Allah.

Islam also clearly divides the world into Muslims and non-Muslims.

This rally is nothing more than a tool for Imam Shamsi Ali, Imam Feisal Abdul Rauf, and his wife Daisy Khan to drum up non-Muslim support for their goal of building an imposing Islamic structure at Ground Zero.

Imam Shamsi is the the latest face of Islamic deception for this project. In the video below he says that Muslims are NOT obliged to spread Sharia.

The Imam tried to spin it that the following verse is out of context.

(For those new to the subject, jizya is part of Shariah Law.)

The only problem is that the Koran states the actions of Mohammad are to be followed for all times.

Koran Verse 033.021
YUSUFALI: Ye have indeed in the Messenger of Allah a beautiful pattern (of conduct) for any one whose hope is in Allah and the Final Day, and who engages much in the Praise of Allah.

Did the Imam skip school on the day of this hadith class?

Bukhari Hadith Narrated Ibn ‘Umar:
Allah’s Apostle said: “I have been ordered (by Allah) to fight against the people until they testify that none has the right to be worshipped but Allah and that Muhammad is Allah’s Apostle, and offer the prayers perfectly and give the obligatory charity, so if they perform that, then they save their lives and property from me except for Islamic laws and then their reckoning (accounts) will be done by Allah.”

Thanks to all who are supporting the event, the list is below:

Besides that list the following celebrities are backing the event as well.

I wonder if more black people would speak out against Islam, if they knew it allows slavery and that Mohammad was a black slave owner?

Muslim Hadith Book 010, Number 3901:
Jabir (Allah be pleased with him) reported: There came a slave and pledg- ed allegiance to Allah’s Apostle (may peace be upon him) on migration; he (the Holy Prophet) did not know that he was a slave. Then there came his master and demanded him back, whereupon Allah’s Apostle (may peace be upon him) said: Sell him to me. And he bought him for two black slaves, and he did not afterwards take allegiance from anyone until he had asked him whether he was a slave (or a free man)

According to the Facebook page, so far 937 people are attending. With another 14,617 awaiting reply. The non-Muslims who are supporting this rally need to take a look at a picture of their children and grandchildren, and ask themselves if they want them to be forced to live under Islamic rule. Because that is what is going to happen, if Islam is not stopped. The choice is yours.

← Germany’s Interior Minister Takes on Islam on First day on job!
“Today, I am a Muslim Too” Rally~ A Day of DECEPTION!~ Vids and Pics! →

115 comments for “NYC March 6th: Massive Support for “Today, I Am a Muslim Too” Times Square Rally”