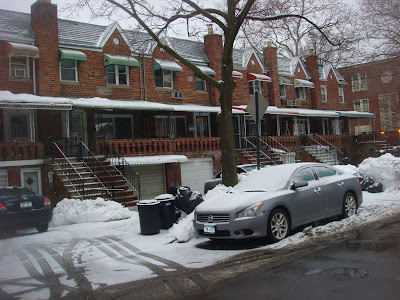 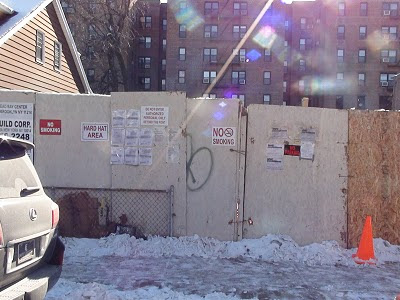 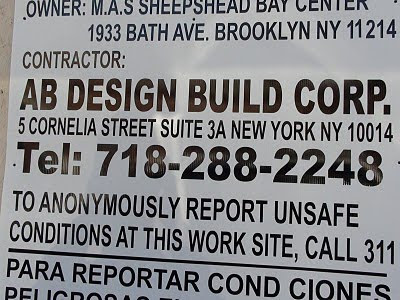 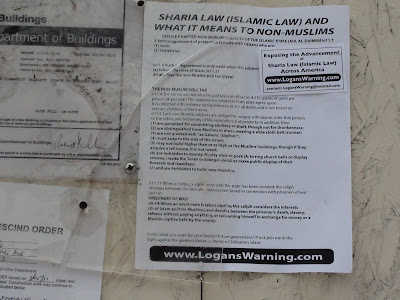 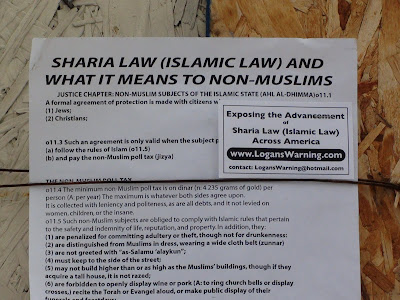 great job informing & defending this neighood against the threat of Islamic Law.
I was struck by the picture of this typical, wonderful Brooklyn-American neighborhood that I have taken of granted all my life ( although I know no one there) & I got this
sad,teary-eyed feeling , at what could & would be the slow but sure destruction of our way of life–creeping Sharia; what Churchill described as a “strong retrograde force…..that paralyzes social development of those that follow it.” Remember, Ayatollah R. Khomeini said, “Whatever good there is exists thanks to the SWORD” I was one of their revered “Holy” men. Keep fighting!!!! I support you in every way.

I dont even live in America, but I am so proud of the efforts that you and Pamela and all who are fighting islam’s advance on our way of life. I see America as the only hope for now. Britain is so dhimmified it seems lost except for the EDL. Long Live America and Long Live Israel!

Chris, You make us proud. Sorry you missed Pamela. Such a strong woman! She makes us very proud too! Great work! Go team!

I would only say that shitrea and pisslam area not separate things. They are one. And people need to be aware also that mooslums will not assimilate and that they take over neighborhoods, eventually making them no-go zones for non-mooslums. Just their presence in a neighborhood is a death toll for that neighborhood and the American way of life.

Tommy Robinson of EDL speaks about the threat from sharia on BBC.

Rally 'Round the Flag

If anyone is in doubt about the ramifications
of the C.A.I.R agenda, please have them
read David Gabbutz’s book, “Muslim Mafia.”
His son infilterated the Council on American Islamic Relations and has uncovered a hot-
bed of information. Do not be deceived
by appearances.

To the Muslim American Society (MAS):

This is directed TO the MAS.
Sorry for any confusion. (On my part – I thought this comment was FROM the MAS.)

Nevertheless, this is exactly how I feel about Islam and I am sure that I speak for all of us.

Funny you should open your mouth and insert your foot that way.
In the Bible in Mark 5:1-20 there is a story about a demoniac, a man who lived among the tombs because he was unfit to live among decent people.
When he saw Jesus, he was crying and cutting himself and he begged Him not to ‘torment him’.
So Jesus asked him “What is your name?”
The man replied, “My name is LEGION, for we are many”. And he begged Jesus not to send him out of the country.
So Jesus sent the UNCLEAN spirits (which were LEGION) out of the man, and into a HERD OF PIGS. The pigs found this to be intolerable, so they ran over the side of a cliff and took their lives, en masse.
Let us review:
Muslims have demons, since Islam is a Satanic belief system and your god is Satan.
The demons did not want to be driven out of the country for some reason, (probably trying to overtake it with taqiyya) so Jesus drove them out of the man and INTO A HERD OF PIGS.
Those pigs which you think are unclean were so horrified by your presence within them that they preferred DEATH to having you inside of them.
These PIGS which you think are ‘unclean’ are too CLEAN FOR YOU.
Your ‘religion’ is Satanic, so much so that even demons cannot stand to have contact with it and you.
…So now what was it you were saying?
I have to hand it to you, Anonymous, you stated your case far better than I.
Keep up the good work!
Thank you for making the blatant fascist ideology which comprises Islam abundantly clear; the thing which CAIR and the MAS cannot falsify, no matter how desperately they try to hide it’s true nature.
DISGUSTING FASCIST ISLAM IS ABOUT AS WELCOME IN THE WEST AS THE BUBONIC PLAGUE.

…We are ONTO YOU.
All the taqiyya in the world cannot cover up the true nature of Islam. You people do a great job of exposing it, too! So keep on marching with those placards saying “Behead those who insult Islam” and keep on demanding sharia this and halal that… People loathe you and Islam, and especially that phony ‘prophet’ of yours that makes Hitler look like a teddy bear, comparatively.
We see you for what you are and even though you have some people fooled, everyday more and more people are waking up and seeing you for the fascist, pedophilic, mysogynistic, little-girl mutilating and little boy sodomising hate-spewing genocidal suicide bomber taqiyya-spouting LOSERS that you truly are, and the assinine culture (which has never made a significant contribution EVER)from which you come.
BACK TO HELL WITH THE WHOLE LOT OF YOU TERRORIST ANARCHISTS WHO SEEK TO DESTROY ALL WHICH IS GOOD IN THE WORLD.
…Again, I thank you and all of those like you who expose Islam for what it truly is!

Islam is the only religion that allows its members to lie if it advances the Criminal Activity of Islamism.

Islam is the only religion that allows its members to practice hypocrisy. The depraved, sinful Muslim male sex perverts may acquire several women and have sex with them, thereby committing adultery. If Muslim women pulled this stunt, they would be stoned to death for adultery.

Islam is the only religion that lashes its women victims to death if the victims are raped by Muslim thugs. The depraved Muslim rapists only pay a fine.

Islam is the only religion that practices Honor Killings, usually on women. Any excuse will do for an Honor Killing: smiling at an infidel, becoming too Westernized, or failing to wear “proper” Muslim rags.

Islam is the only religion that had a prophet, his name was Muhammad, who murdered; lived in perpetual adultery; legally raped a little girl aged eight years, nine months; had sex with an underage little girl named Aisha; committed incest with his son’s wife; stole property; owned a private whore house; “married” at least 11 women, thereby committing adultery; never kept the Sabbath holy since he was living in perpetual sin, including on the Sabbath; the first prophet that personally cast the first stone at a women who confessed the sin of adultery; chose Satan, sometimes called Allah, as his personal god; collected 20% of all war booty. Let’s face it, Muhammad was a no good SOB (Son Of the Beast) a child of the Muslim god, Satan, also known as Allah.

Islam is the only religion that murders apostates, all because they no longer choose to practice Criminal Activity of Islamism mentioned above.

Amen to all this! I pray that the non-Muslim and blaze Christians will finally wake up to the threat of Sharia.

Notice that the owner listed on the sign is named MAS ‘Sheepshead’ Bay Centre. Although not a goat, Jesus is the Lamb of God, so I wonder whether this is a Freudian slip exposing the evil intentions of Islam?

Chris, Reading on Infidel Blogger’s Alliance a NY Post story that says the city has halted construction. Good on you! But is the city really stupid enough to think that mooslums will listen to them? They’re fools. They will only dig harder now. They must be imprisoned and the whole project stopped!

Putting up posters is a good idea. We can all do at least that, and we should.

You, Pamella and Robert are so amazing..God bless you

You, Pamela and Robert are so amazing..God bless you

Chris, You are a true patriot. I just would like to remind your suppporters that there is no need to get ugly or profain when responding. They give us plenty of facts to expose this radical group for what they are without having to use profanity. I just think it diminishes the argument. Just stick to the facts and the Truth will Keep us Free. Everyone must be on guard and help expose this threat and support Chris and his efforts.

Thanks for the kind words everyone!

[…] September non-Muslims were complaining that the Hillside Islamic Center was encroaching on the residential lifestyle of the neighborhood. This was because members of the Mosque were looking to add more 18 more parking spaces for the […]