Besides exposing Sharia Mosques in America I have decided to start looking into what Islamic schools are up to as well. Today we can see that the El-Ber Islamic School located at 25-42 49Th Street Astoria, is not teaching young Muslims to assimilate.

Lets start with the goals of the school.

El-Ber Islamic School seeks to provide its students with education and development under the shade of the Qur’an and authentic Sunnah of the Prophet Mohamed (s.a.w.).

El-Ber Islamic School seeks to be a vehicle for its students providing them with beneficial knowledge, developing their character, and equipping them with skills that will enable them to be leaders of our communities and others, InSha’Allah. To accomplish this goal the school will,InSha’Allah, provide the best curriculum (NEW YORK STATE ADVANCED CURRICULUM) along with the best teachers for the students.

Yes, spreading the hate that stems from Islam is NYS certified.

In the school’s opening message it has guidelines for Islamic parenting. These are very similar to the one I posted from Islamic-World.net

Message from the Director. Mr. Atef I. Mohamed

May peace and blessings of Allah be upon you all

I would like to welcome you all, wholeheartedly, to an all new academic year … and to also introduce to you this website which, I hope, you will go over thoroughly to familiarize yourselves with the rules, regulations, and policies of El-Ber Islamic School which is devoted to educate children in an authentic Islamic way, providing them with the useful and necessary education; after all, these children are Allah’s trust in our hand, so we have to treat them accordingly, since the preservation and the safeguarding of this trust hinges primarily upon Good Education.

Investing in educating children is the sole fast and thriving way for any society that plans for a successful and civilized future. This education can only be nurtured via a solid interaction of efforts involving the home, the school, and the Mosque; and everyone does their best to make a man who is a leader and a rightly guided individual. The house, the heart of which is the mother and the father is its covering, full of love, consciousness, and mercy, is the house that makes the man.

I would just like to note that the words man that are highlighted above, is exactly how they had it on their site.

Furthermore, it’s worth mentioning that the role of the mother in education is greater that the husband’s or the teacher’s; she is undeniably the one who can handle and endure this role. I’d like to seize this opportunity to put forward some important guidelines in educating children:

1- Parents are highly advised to read and learn the ways of the prophet (pbuh) as well as hismanners and ways in education.

When see statements like the one above, I immediately think of how most Muslims will not even begin to question Islam. All because they have been told the Koran is literal word of Allah. Mohammad was a rapist, and acting like he was so well behaved is an extreme act of denial. The man needs to be exposed over and over. I encourage you guys to ask Muslims if they would allow their daughter to be married off at the age of six. Let them know this behavior is unacceptable here, non-negotiable!

2- A part of your duties is to watch your children and follow up with their activities; help them choose righteous friends, and read interesting and useful books; solve their problems through persuasion, and with wisdom.

3- Teach your children Al-Qur’an and Sunnah; Awaken their desire for Al-Jannah (Paradise), and warn them of An-Naar (Hellfire).

The Sunnah is the words and deeds of Mohammad. Here just a few examples of them.

4- Teach your child the utterance and saying of La’ilaha illa-Laah, Mohammadur-Rrasul-ul-Laah (There is no god worthy of worship but Allah, Mohamed is the Messenger of Allah) from his/her early age, for it is a benefaction and a blessing.

In others word, do not allow the children to even consider another religion other than Islam, and do not question Mohammad.

5- Teach your children to ask no one but Allah and seek His help; instill in them, from their early age, His love and faith in Him alone.

#5 is all about creating more slaves to Islam. It is just sad what they teach their children.

6- Warn your children of blasphemy, cursing, or using any bad language, and of stealing and lying.

Do not question or criticize Islam. This is just more mental slavery. For those who are reading and are new to the subject, most types of lying is actually allowed under Islam. This can be seen HERE.

7- Warn your children of gambling, even if it’s for fun.

8- Train your child to pray and fast and show him/her their benefits.

According to Islamic Law, a parent should hit a child for not praying. From the Reliance of the Traveller. A Classical Manual of Islamic Law.

f1.2 When a child with discrimination (O: meaning he can eat, drink, and clean himself after using the toilet unassisted) is seven years of age, he is ordered to perform the prayer, and when ten is beaten for neglecting it (N: not severely, but so as to discipline the child, and not more than three blows).

9- Birthday celebration is Bid’a, and therefore it is forbidden in our Deen.

In other words you are are not an individual, you are just another part of the ummah.

10- Don’t let your children view dissipated magazines, or detective stories, nor will you let them watch T.V. or go to the movies, because of their potential affect on the children’s behavior now and in the future.

So there is nothing worthwhile on T.V.? Is the movie Cinderella a threat to Islam?

11- Warn your children of smoking and advise them to eat what is good.

12- Train children to be righteous in deeds and in words.

13- Make your daughter love Al-hijab in her early age so she’d be committed, to it when she grows up. 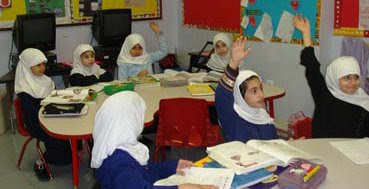 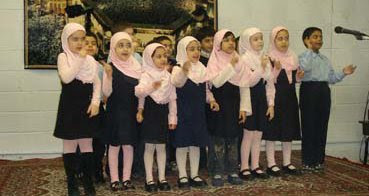 14- Train your child to use his/her right hand in giving and receiving things, eating or drinking, and while writing.

16- Buy educational and valuable Islamic story books for your children so they may learn from them.

How about buying them a book on American history, and all the good this country has done across the world?

17- Use the approaches of Targheeb and Tarheeb, Targheeb alone is not enough.

As with all above, the “About our school” page says nothing about assimilating.

El Ber Islamic School
‘In The Name of Allah, the Most Gracious , The Bestower of Mercy’

The Establishment:
• El-Ber Islamic School was established in 1997

Levels of Education:
• Currently from Nursery to Sixth grade

Religion:
• Children’s education in a family-like Islamic environment
• Observance of Salaat-ul- Jumu’a (Friday Prayer), and Al-Jama’aat (daily group-prayer rituals) in the school.
• Protecting children and raising them in an Islamic manner

Morals:
• Sincerity and Honesty
• Faithfulness and Trustworthiness
• Unselfishness
• Love to do good deeds and help others

Education:
• The Islamic curricula are based on The Holy Qur’an and the Noble
• Sunnah
• New York State Advanced educational curriculum
• High–Level Arabic Language

As we can clearly see this school is not about assimilating at all, it is about creating an Islamic America. As non-Muslims we have only two choices here. Either we speak up or we surrender. Where do you stand?

← I Have a Small Request
Islamic-World.net~ Teen Training Course →