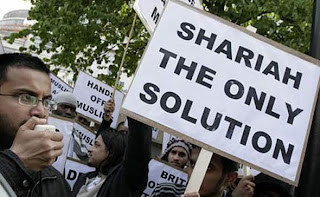 (Repost from Islam in Action.)
When the Sharia Courts in the UK were first announced, anyone who can see past the day that they are in knew that this would lead to nothing but more demands and trouble. In a followup to the “85 Sharia Courts in UK, Says Report” story we learn what the UK Sharia Courts are calling for.

Muslims living in Britain are under orders from Sharia courts to regard “fighting with Britons and Americans as a religious duty” a shocking new report on Sharia courts in Britain has claimed.

Issued by independent think tank Civitas, the new report, called “Sharia Law or ‘One Law for All’?” and authored by Islamic specialist Denis MacEoin, also says that there are now around 85 Sharia courts in Britain.

The open declaration of war – Jihad – against ordinary British and American people by Islamic law courts is a damning indictment of the treason committed by the Tory and Labour parties in allowing millions of Muslims to settle in Britain.

In addition to the horrifying declaration of holy war against British and American people, the Sharia courts operating in Britain have also ordered that:

According to a press release issued today by Civitas, the courts operate inside the rapidly spreading network of mosques throughout Britain.

In the press release, Mr MacEoin wrote that it is extremely difficult to find out what goes on in these 85 courts, so he has relied on a range of fatwas issued by popular online fatwa sites, run out of or accessed through mosques in the UK as an indication of the sort of rulings these Sharia courts are making.

Only five of the Sharia law courts are publicly known and run by the Muslim Arbitration Tribunal, a body whose rulings are enforced through the state courts under the 1996 Arbitration Act.

However, Mr MacEoin said that “Sharia courts should not be recognised under the Arbitration Act.

“Sharia courts operating in Britain may be handing down rulings that are inappropriate to this country because they are linked to elements in Islamic law that are seriously out of step with trends in Western legislation,” Mr MacEoin wrote.

The revelation that Sharia rulings or fatwas are being enforced through state courts by the Muslim Arbitration Tribunal (MAT) has alarmed many, especially as the Arbitration Act, under which this takes place, specifically excludes divorce and childcare cases.

“Under most interpretations of Islam a person who leaves the faith is an apostate who can be put to death. While this threat remains, it cannot be accepted that Sharia councils are nothing more than independent arbitrators guided by faith,” the Civitas press release continued.

“The reality is that for many Muslims, Sharia courts are in practice part of an institutionalised atmosphere of intimidation, backed by the ultimate sanction of a death threat. The underlying problem is that Sharia law reflects male-dominated Asian and Arabic cultures. It cannot therefore be accepted as a legally valid basis even for settling private disagreements in a country like ours, where our law embodies the equal legal status of everyone, regardless of race, gender or religion.”

Mr MacEoin wrote in his conclusion that the “introduction of Sharia law into this country is a recipe for a dichotomous legal system that holds Muslims and non-Muslims to different standards.

“This is not a matter of eating halal meat or seeking God’s blessing on one’s marriage. It is a challenge to what we believe to be the rights and freedoms of the individual, to our concept of a legal system based on what Parliament enacts, and to the right of all of us to live in a society as free as possible from ethnic-religious division or communal claims to superiority and a special status that puts them in some respects above the law to which we are all bound.”

* In their coverage of the Civitas press release, all of the mainstream media deliberately suppressed the part dealing with the Sharia courts’ declaration of Jihad against British and American people.

121 comments for “UK Sharia Courts:Sharia is the law of the Land, Wage war”