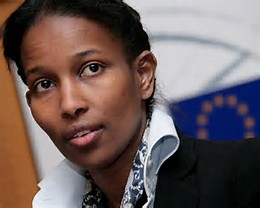 “I think that’s ridiculous, and I’ve been very hard on him for that,” Hirsi Ali said when asked about Wilders’ call for a ban on the Koran and mass deportations. “He and I are not friends at all.”

No wonder her and the Great Geert Wilders parted ways. Because anyone who is paying attention to this issue knows that her policies are nothing more than a slow Islamicide.

Apparently positive results do not matter to her though. Because in the wake of the implosion of America’s poster boy “moderate” Muslim, Zudhi Jasser, Apostate Ali still calls for the reformation of Islam. A policy that not even her friend Jasser can explain. 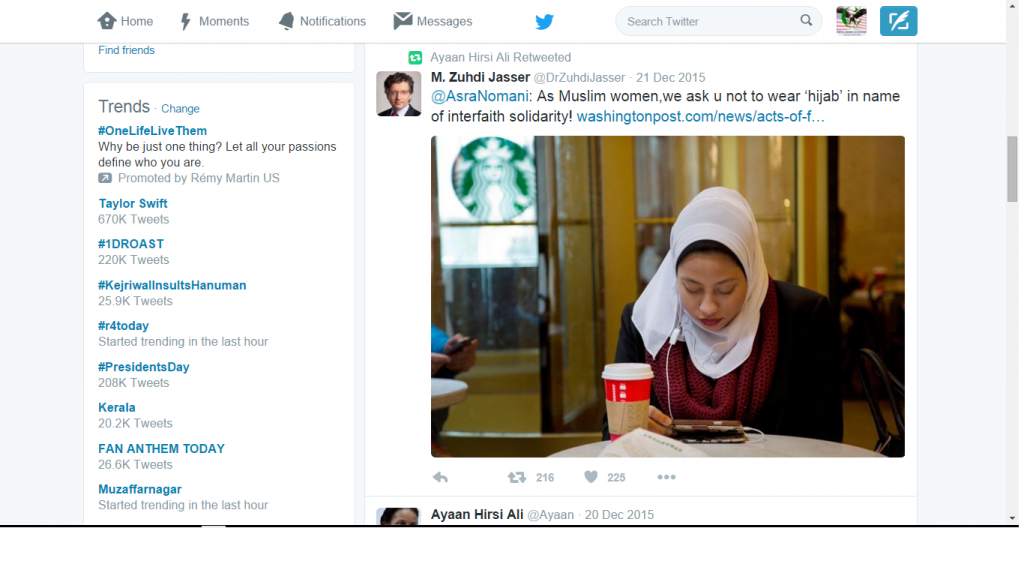 From the The “Islamic Reform” page of Jasser’s American Islamic Forum for Democracy (AIFD) website. 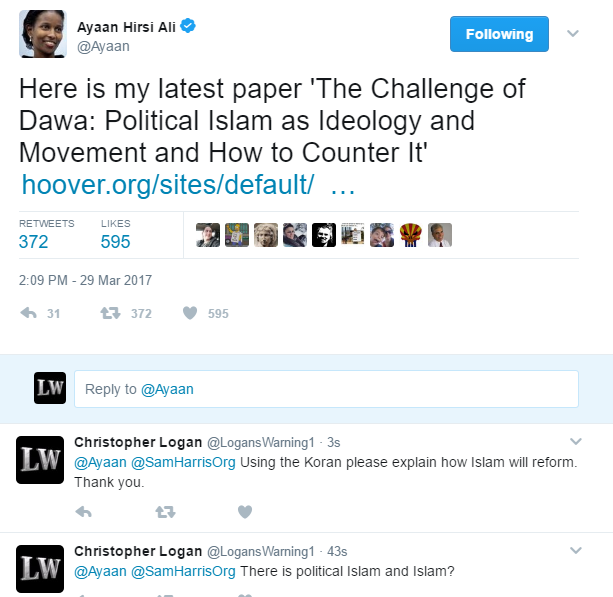 Cutting to the Chase ~ Ali Does not Fight Islam, She Fights for it

The dominant strategy from 9/11 through the present,
focusing only on Islamist violence, has failed. In focusing
only on acts of violence, we have ignored the ideology
that justifies, promotes, celebrates, and encourages violence, and
the methods of dawa used to spread that ideology.

Without question, certain military operations against jihadist
groups could be conducted more effectively. The virtual abandonment
of Iraq, the overreliance on air power and drone strikes,
the belief that terrorist networks can somehow be decapitated:
all of these have been fundamental tactical errors. Nevertheless,
a return to the highly effective counterinsurgency tactics of the
Iraq “surge” and its counterpart in Afghanistan, while necessary,
cannot be regarded as a sufficient response to the threat we face.
Plainly, we cannot continue to fight political Islam by engaging in large-scale foreign military interventions. The American public has not unreasonably lost faith in that approach. So what else can be done?

First, we need a paradigm shift that recognizes how violent
jihad is intertwined with the ideological infrastructure of dawa.157
In the old paradigm, we focused on combating Islamic terrorism

62 the challenge of dawa

In the new paradigm, we must continue to seek the destruction
of groups like the Islamic State and al-Qaeda, but we must also
develop a suitable strategy to combat dawa.

This will reopen—if it was ever over—the contentious debate
on how to balance civil rights with the need for security. There
are trade-offs to be made here, as always. It is clearly fatalistic to
suggest, as the Obama administration did, that Americans must
learn to live with the terrorist threat and that, on the basis of
statistics, Americans are more in danger from their own bathtubs
than from Islamist terrorists. The terrorist threat cannot
be measured only by the number of successful terrorist attacks.
The threat also includes the many attacks that were thwarted by
effective security measures and, more importantly, the unknown
plots currently being hatched, and the probability that such plots
will grow more numerous and more dangerous in the future.
Bathtubs do not plot to overthrow the American way of life. The
Islamists do.

It is the job of Congress to find the right balance in the face of
this specific threat between our rights and freedoms and a policy
package that is effective in combating the threat. Protection of
the religious rights of the members of the Muslim minority who
are not engaged in Islamist dawa should be an integral part of that package.

Congress must give the president in this war the tools he needs
to identify and dismantle the infrastructure of dawa in the United
States: the network of radical Islamist centers, associations, and
mosques that perpetuate political Islam in its most radical form, even if they themselves do not perpetrate the violence that they so often preach.

This work is urgent. Two successive administrations have
approached the problem of political Islam with a completely

flawed strategy: the illusion that a line could somehow be drawn
between Islam, “a religion of peace,” adhered to by a moderate
majority, and “violent extremism,” engaged in by a tiny minority.
President Trump has already identified a different course
of action. In August he pledged that his administration would
“speak out against the oppression of women, gays, and people of
different faith” in the name of Islam. While the Obama administration
has shunned proponents of Islamic reform, Trump vowed
to “be a friend to all moderate Muslim reformers in the Middle East, and [to] amplify their voices. This includes speaking out against the horrible practice of honor killings,” as well as establishing as “one of my first acts as president . . . a Commission on Radical Islam which will include reformist voices in the Muslim community.”158 He also declared that “we should only admit into this country those who share our values and respect
our people”—screening would-be immigrants for links not just to
terrorism but also to political Islam as an ideology.

I warmly welcome those words and hope that they will be
turned into deeds soon. This report is intended to help the new
administration put these long-overdue corrections to US policy
into swift and effective action.

The recommendations made here to President Trump’s administration
can be grouped under seven headings:

66 the challenge of dawa

the American people, allied countries, and Muslims that
Islamism is a hazard and poses risks to both national security
and America’s constitutional order.

• The administration should recognize the diversity of Muslim
citizens and support Islamic reformers here and around the
world.
• In reaching out to the Muslim American community, the
administration should ally itself with genuine Muslim
moderates and reformers, not with “nonviolent” Islamists.

Was Zuhdi Jasser one of those “genuine moderates and reformers?

I do not know what Islamism and Islamists are. I do know what Muslims are though. They are the followers of the enemy ideology called Islam.

Name the enemy or lose the war.

4 comments for “Aposte Hirsi Ali: We Must Reach out to the Reformers”