Are you a youth ages 12-18? Maybe you are the parent of a youth? Winter break is fast approaching and so are ISNA’s MYNA winter camps! What will you be doing this Winter Break? Don’t want to sit around the house bored?

Then join us for one of our MYNA winter regional camps in Chicago (Dec. 26-30, 2011) or Washington D.C. (Dec. 26, 2011 – Jan. 1, 2012). Although our winter camps in Texas and Ohio have reached maximum capacity, we still have limited space in Chicago and D.C. and hope to see you there! Celebrate a full week of friendship, deen, and leadership development in our nation’s capitol or the great windy city!

Our nation’s capitol is one of the enemy’s main states to target, with the “religion of peace” IslamoCON.

Parents often call or email ISNA to ask, “What did you do to my child at your camp?” They report that their children return home from a MYNA camp with a renewed dedication to Islam, improved self-esteem and pride in their Muslim American identity, enhanced focus on school work and a dedication to community service and leadership.

With only one 5 days left to register for the remaining two camps, we hope you will act fast and make sure these two camps do not fill up without you! After all, you don’t want to just read about the fun on facebook after a camp ends, (and wish you had been there), you want to take an active role in the next generation of Muslim leaders in America.

Muslim leaders across America are being trained to take positions in the US government, and manipulate the media. They target those positions in order to gain influence in America. As you can see our freedoms are a tool for Islam to slowly take over. 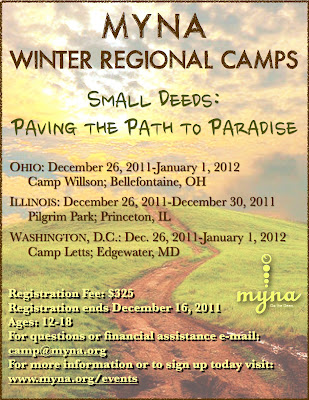 They are openly promoting “paradise” to young Muslims. Well here is what the Koran has to say about the hereafter.

Koran Verse 003.169
YUSUFALI: Think not of those who are slain in Allah’s way as dead. Nay, they live, finding their sustenance in the presence of their Lord;

America has enough of her own problems, she does not need Muslims/Islam bringing more here.

What Muslim youths are saying about the camps:

The Power of MYNA: Youth Testimonials

1. MYNA gives you a voice

“(After MYNA camp) I know how to deal with questions at school about my hijab or about my religion in general. I learned that if I don’t understand something when I’m memorizing Quran that it’s not a bad idea to look it up. I’m not afraid to ask questions.”

In other words, the kids are being trained how to misrepresent Islam to naive non-Muslims.

“I feel that I can come back from camp and live my life. Before camp, I wanted to give up because trying was way too hard. I wanted to just withdraw into a cocoon, where I would have no expectations. But, now I want get back to working on myself and my relationship with Allah. I love this camp because I got to break the layers of negativity that surrounded me. I thank Allah (SWT) for giving me the opportunity to go, meet the people that I met, and listen to the lectures that I listened to.”

“I realized I had a lot more potential then I knew, so I am applying it by trying to establish a MYNA chapter in Lexington!”

As I said, our freedoms are a tool for Muslims to use, to help Islam take over from within. To fight this threat, America should have ended all Muslim immigration a long time ago. Now you see how something as simple as an Islamic camp, can be a threat to life as we know it. The rules must change or it is just a matter of time until we lose this war. Please do your part, and protest all things Islam!