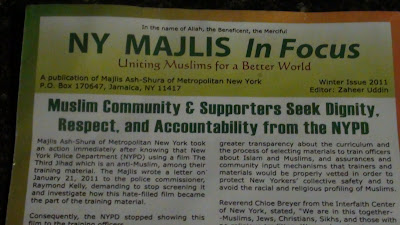 I remember back in December when many of us anti-jihadists got excited when Peter King, Chairman of the House Homeland Security Committee announced, he will be holding hearings on the “radicalization” of some American Muslims. But then in January that excitement quickly faded for many of us, as King stated he would not be calling Islam expert Robert Spencer, and the Investigative Project on Terrorism’s Steve Emerson as witnesses.

At that time it was said that Dutch critic of Islam, Ayaan Hirsi Ali and so called “moderate” Muslim Zuhdi Jasser were going to be possible witnesses in the hearings. Then February came and King stated he would not be calling Hirsi as well. He did go with Jasser though.

At that point it was clear to many of us that King had bowed to political pressure. In this exclusive Logan’s Waring report we will see just where that pressure came from. Having obtained the Winter Issue 2011 of NY Majlis In Focus pamphlet from a NY Mosque, we see how Muslims brazenly boast about handing Peter King a massive beat down! 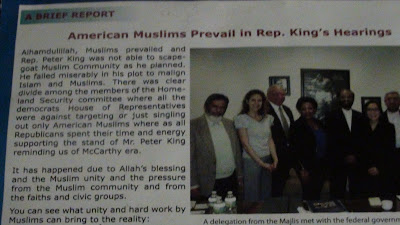 (A delegation from the Majlis met with the federal government officials, U.S. Dept of Justice’s Community Relation Services regional director Reinaldo Rivera, Jr., 3rd from left, and next to him, U.S. Attorney, East District of New York, Ms. Loretta Lynch.)

Alhamdulillah, Muslims prevailed and Rep. Peter King was not able to scapegoat Muslim community as he planned. He failed miserably in his plot to malign Islam and Muslims. There was a clear divide among members of the Homeland Security committee where all the democrats House of Representatives were against targeting or just singling out only American Muslims where as all Republicans spent their time and energy supporting the stand of Mr. Peter King reminding us of McCarthy era.

It has happened due to Alla’s blessing and the Muslim unity and the pressure from the Muslim community and from the faiths and civic groups.

You can see what unity and hard work by Muslims can bring to the reality.

* It was the pressure from the Muslims that made Rep. King defensive.

* It was the pressure from the Muslims, Peter King declined to invite top Islamophobes for the the hearings, like Steve Emerson, Robert Spenser, Pamela Geller, Denail Pipes, Walid Phares, Murtid Ayann Hirsi Ali. (Spelling is as in pamphlet)

* It was the efforts and hard work of the Muslims that Democratic Representatives on the Homeland Security Committee spoke in favor of American Muslims and criticized the narrow nature of the hearings.

* It was the strategy of the Muslims that Rep. Keith Ellison, Rep. Andre Carson, Rep. John Dingell and Rep. Al Green spoke in the defense of Muslims and against the hearings.

* It was the decision by the Muslim leadership on Jan. 9th in Washington D.C. that to try and release a letter “Dear Colleagues” against the hearings by 100 Congresspersons. The letter was signed by 52 Representatives and released to the news organizations.

* It was the Muslims’ collective efforts that brought different faith and conscience groups together on a national level.

* The Majlis Ash-Shura (of Metropolitan New York) discussed the King’s announcement regarding hearings on Muslims in its meeting on December 15, 2010 then we developed an action plan in consultation with Muslim national organizations in a major meeting on Jan. 9th.

Stay tuned for part II. The plan and the future Islamic assault on the anti-jihad movement!

Please help Logan’s Warning continue to dig into the inner workings of these organizations. In an effort to expose their plots to spread the influence of Islam, in their attempt to make Islam untouchable. All donations can be made on the site via PayPal, or a check or money order can be sent to the following P.O. Box. Please make them out to “Christopher Logan”.