Just last week I posted an article entitled: “UK: Muslims Call for 3 Towns to be Placed Under Sharia!!”. Today we learn more details of the UK’s Sharia movement. A movement that will most likely bring civil war to the streets of the UK.

(Sorry for the graphic language in the picture) 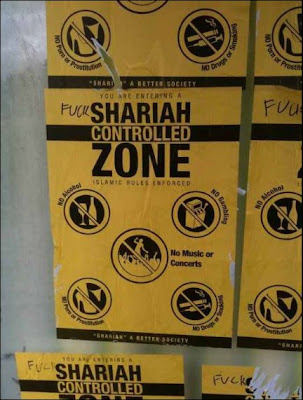 HARDCORE Islamists have vowed to ban booze and mixing between the sexes in new Sharia law enforcement zones across the UK.

The posters declare: “You are entering a Sharia controlled zone – Islamic rules enforced.”

The radicals will kick off their controlled zones in the London borough of Waltham Forest later this month.
They also claim their hardline rules will be policed by thousands of “Sharia cops” on the streets.

Preacher Anjem Choudary has called the scheme an alternative to government attempts to combat violent extremism under the Prevent strategy.

Last night the former al-Muhajiroun and Islam4UK leader warned: “The Prevent strategy introduced by Theresa May is going to be countered in the next couple of weeks beginning in Waltham Forest where there will be a Sharia- controlled zone sticker campaign.

“This will mean this is an area where the Muslim community will not tolerate drugs, alcohol, pornography, gambling, usury, free mixing between the sexes – the fruits if you like of Western civilisation.

“This will be a very heavy leafleting campaign aimed at both the Muslim and non-Muslim community in terms of what the Sharia means economically, socially and politically.

“Waltham Forest, including Walthamstow and Leyton, will also be targeted with a march.

“We want to run the area as a Sharia-controlled zone and really to put the seeds down for an Islamic Emirate in the long term.

“We want to create an area where Muslims can live together, make transactions with each other, and interact between themselves rather than with the wider community.”

The ex-lawyer added: “There are 25 areas around the country which the Government has earmarked as areas where violent extremism is a problem.

“We are going to go to all these same areas and implement our own Sharia-controlled zones.

“This is the best way for dealing with drunkenness and loutishness, prostitution and the sort of thug life attitude you get in British cities.

“We live among the non-Muslims but we have to distinguish ourselves from them.”

In May we told how Choudary had announced plans to set up teams of Islamic “Guardian Angels” to help implement Sharia law across the UK. He reckoned the “Sharia cops” would do a better job of policing Muslim areas than traditional officers.

Choudary said: “We now have hundreds if not thousands of people up and down the country willing to go out and patrol the streets for us and a print run of between 10,000 and 50,000 stickers ready for distribution.”

The Muslims Against Crusades member, who said he “embraced Islam” 11 months ago said: “Allah has told us alcohol, drugs, pornography, music and concerts are all forbidden under Islam.

“That is why it is our duty to go out and spread his word among Muslims and the wider community.”

Just as many of us predicted! A few things have to take place now. Undercover sting operations in which officers break Sharia Law, and the Muslims try and enforce it. Besides that Sharia needs to be banned. The Sharia courts raided, and those who call for Sharia arrested and charged with treason. Start with IslamoPUNK Anjem Choudary.

One more thing. A special “thanks” to the Sharia supporting Archbishop of Canterbury. YOU sir, are a disgrace to Christianity and the UK!

60 comments for “UK: Sharia Police Getting Ready to Enforce the LAW!”