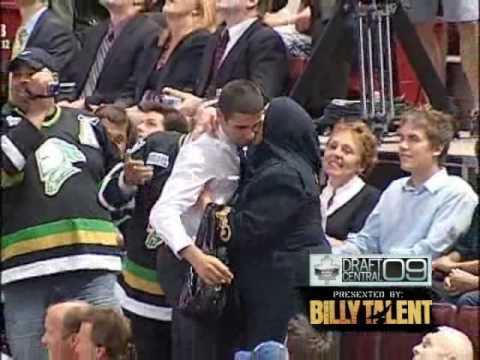 In the past I have stated that career choices of Muslims do not negate them from being part of the threat Islam is to us. Examples of this are when NBA legend Kareem Abdul Jabbar taking a stand for Islam and speaking out against “Islamophobia”. Another being Muslims who were doctors joining the violent jihad.

Tonight we see another example which proves me right, as NHL player and Muslim Nazem Kadri has threatened to slash the throat of an opposing player!

To make matters worse, this is not the first time the wannabe Mohammad has made such a threat. He issued the same threat several years ago to NHL Swiss player Nino Niederreiter.

In fact, the Leaf prospect said yesterday that not only did Switzerland forward Nino Niederreiter not make any derogatory reference to his ethnicity or Muslim religion, he regretted not shaking Niederreiter’s hand after Sunday’s game.

Where could this two-time loser have gotten the idea from?

Could it be this?

Then the Messenger of Allah commanded that ditches should be dug, so they were dug in the earth, and they were brought tied by their shoulders, and were beheaded. There were between seven hundred and eight hundred of them. The children who had not yet reached adolescence and the women were taken prisoner, and their wealth was seized.

As for the hit, Kadri got his clocked cleaned by a clean hit. But obviously it “offended” his “Muslim sensitivities”.

As for the Toronto Maple Leafs and the NHL, they have a potential Islamic terrorist on their hands. Their move….

← Let’s Take it to the Streets!
Logan’s Warning Vs. The Ahmadi Caliph Hazrat Mirza Masroor Ahmad! →