Yesterday, NBA basketball legend Kareem Abdul-Jabbar and actor/martial arts aficionado, Bruce Lee, “dropped” in the film classic, “Game of Death”, joined the chorus singing the “Islamophobia” song. But, seriously, folks, what Abdul-Jabbar is sharing publicly about his views on Islam is NO joking matter. 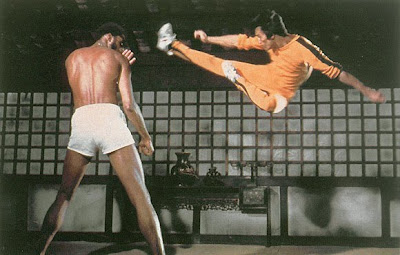 While calling into Katie Couric during her broadcast, Abdul-Jabbar did his part in the (mis)information war.

Come on Kareem, you mean the best way to counter “Islamophobia” is to say anything to cover for Islam. Just like your so-called prophet commanded!

When you speak of morals, is that what you mean Kareem?

Would you like to be a slave in the name of Islam? Slavery is ALWAYS wrong no matter what ideology espouses it! Islam included.

If you feel like sharing YOUR perspective & thoughts on Kareem’s vocal support of Islam, he can be reached by clicking on the link provided HERE.

56 comments for “Kareem Abdul-Jabbar: ‘Islamophobia Is On The Rise””