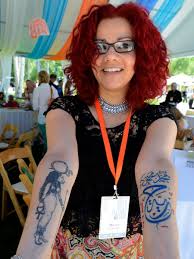 f you travel the social media networks you might have noticed that there are plenty of Muslims on it who fancy themselves as “human rights” activists. But in reality they are supporting what is a disgrace to humanity. Islam.

Today we will take a look at NY’s Mona Elthaway. A Muslim who supposedly fights for the rights of females, but in the end shoots herself in the foot by remaining a member of the ummah (Muslim community).

Back in 2014 she had debate with the UK’s Muslim propagandist Medhi Hassan, on the rights of females in the Arab world.

Mehdi Hasan (VO): How bad is life for women in the Arab world? There’s no doubt the region is far from being a model of gender equality. But are critics too eager to brand Arab women as helpless victims? My guest tonight sparked outrage when she wrote an article saying the root of the problem is that Arab men hate women.

I’m Mehdi Hasan and I’ve come here to the Oxford Union to go head to head with journalist, activist, feminist Mona Eltahawy, and challenge her on whether her rhetoric is helping or hurting the cause of women’s rights in the Middle East.

Tonight I’ll be joined by a panel of three experts at the Oxford Union chamber: Dr Aitemad Muhanna from the London School of Economics Middle Eastern Centre; and Taj Hargey, a progressive imam based in Oxford and Dr Shuruq Naguib, who teaches Islamic and Gender Studies at Lancaster University.

Mehdi Hasan (VO): A committed feminist for over 20 years, she’s perhaps the most provocative voice out there on the issue of misogyny and the Middle East.

Mehdi Hasan: Thanks for coming.

Mehdi Hasan: Mona, is your view that there is a war being waged on women in the Arab world?

Mona Eltahawy: Absolutely, Mehdi. I mean when 12-year-old girls are dying giving childbirth in Yemen, when 91 percent of Egyptian girls and women have had their genitals mutilated, when 16-year-old girls in Morocco are forced to marry their rapists so that their rapist can escape conviction, that is nothing short of a war.

While she is correct about the horrors for females in that region, she never gets to the root of the problem which is Islam itself. Because it is a fact that Islam allows child marriage.

Koran 65:4: Speaks of the iddah or waiting period a divorced or widowed Muslima has to wait until they can remarry.

Men are in charge of, they have authority over, women, disciplining them and keeping them in check, because of that with which God has preferred the one over the other, that is, because God has given them the advantage over women, in knowledge, reason, authority and otherwise, and because of what they expend, on them [the women], of their property. Therefore righteous women, among them, are obedient, to their husbands, guarding in the unseen, that is, [guarding] their private parts and otherwise during their spouses’ absence, because of what God has guarded, for them, when He enjoined their male spouses to look after them well. And those you fear may be rebellious, disobedient to you, when such signs appear, admonish them, make them fear God, and share not beds with them, retire to other beds if they manifest such disobedience, and strike them, but not violently, if they refuse to desist [from their rebellion] after leaving them [in separate beds]. If they then obey you, in what is desired from them, do not seek a way against them, a reason to strike them unjustly. God is ever High, Great, so beware of Him, lest He punish you for treating them unjustly.}

Now there are only three possibilities happening here. She does not know Islam, is in complete denial about it, or is purposely misleading the public into believing that “Muslims” like her are going to magical transform Islam into a female friendly ideology. That is not going to happen.

Whatever the answer is, the bottom line is that she is helping perpetuate the distain Islam has for females. Because not only does not get to the root of the problem, she is insanely protective of Islam! Here is her response to me after I said that Christians who were speaking out against Islam were just exercising their right to free speech. 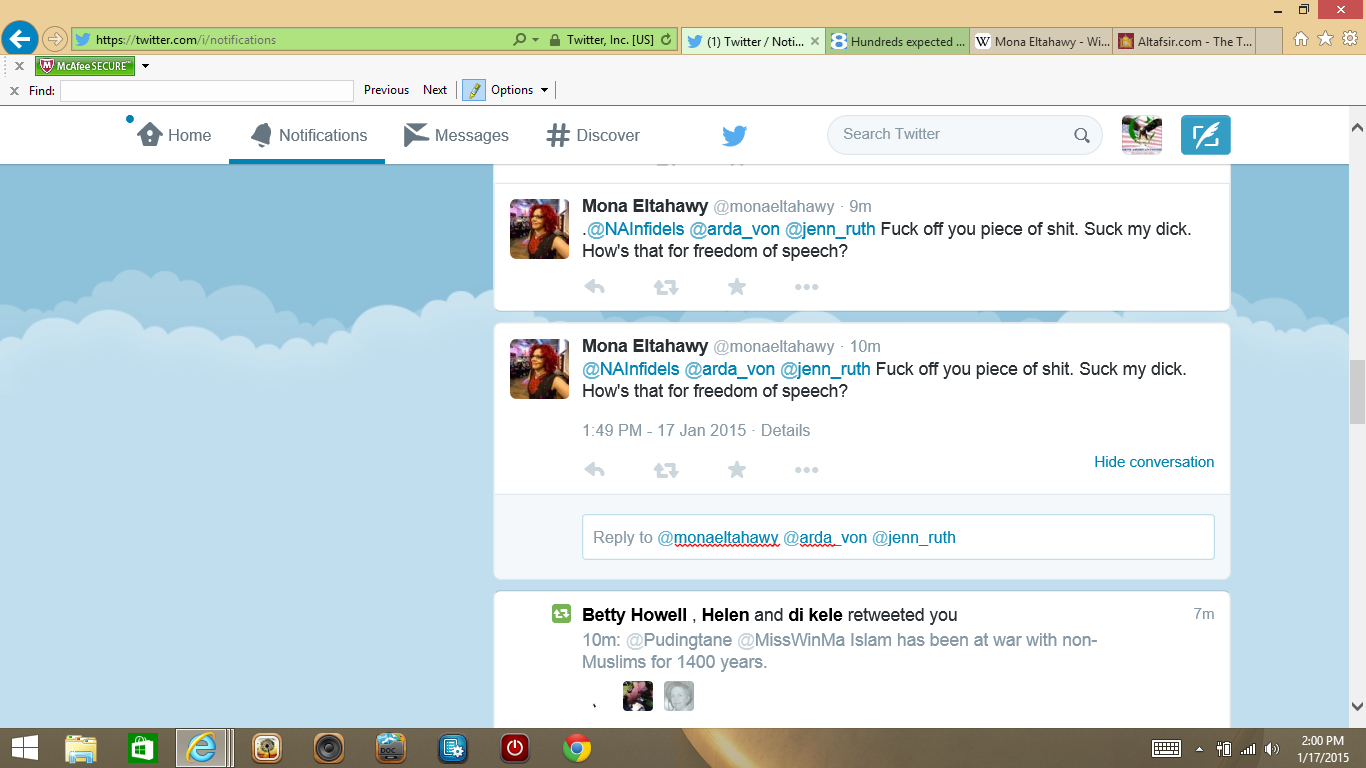 She was so mad she said twice, and she was not done there! 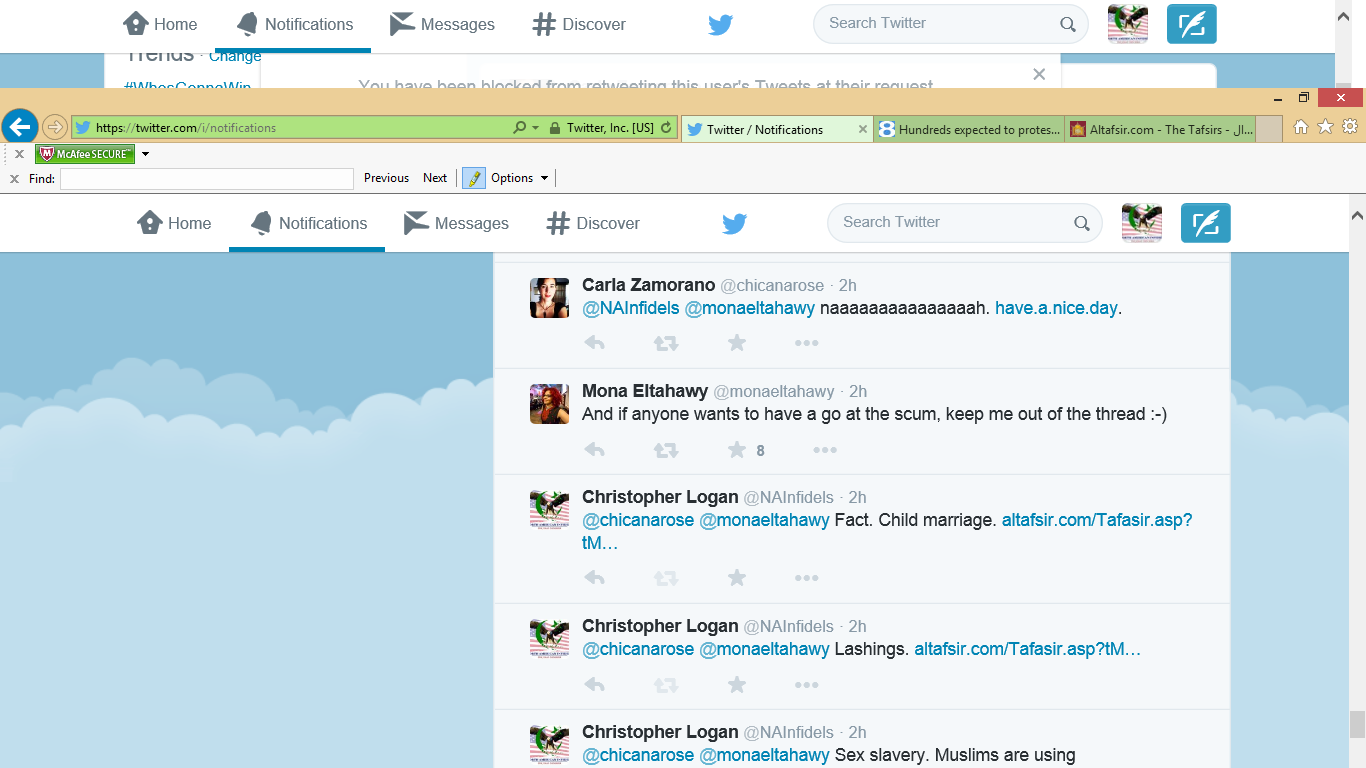 This is not the first time the so called “rights activist” has gone off the deep end in the defense of Islam. She is infamous for her marauding Muslim subway attack on NYC activist Pamela Hall, and Pamela Geller’s truthful subway ads. 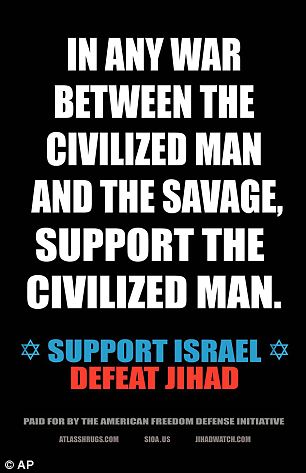 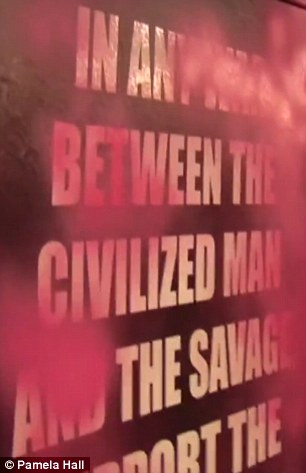 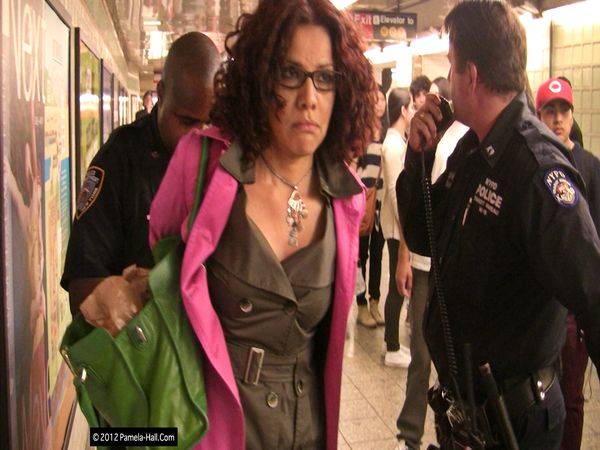 Hopefully her next stop will be…. 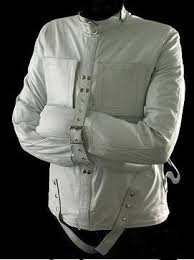