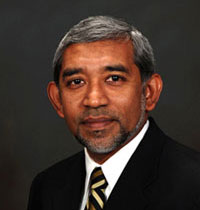 The City Council of Jacksonville, has lent a hand in the slow suicide of America. They have voted the ex-chairman of the Cancer of American Islamic Relations, onto their Human Rights Commission. Back in 2008 when Parvez Ahmed left CAIR, he said he wanted the group to be even more pro-active in promoting the civil rights of Muslims. Like they had not done enough damage already. He is also another Islamic liar, as he made the following ridiculous statement.

The City Council was warned, but they still voted him in. I guess they wanted to show how “tolerant” they are.

Ahmed, a professor at the University of North Florida, called the last few weeks surrounding his nomination a contrived controversy that threatened to stand in the way of him serving on the commission. Now, he said he’s looking forward to moving on.

“I also hope this has been an opportunity to learn and dialogue on difficult matters, the kind of issues that the Jacksonville Human Rights Commission is uniquely positioned to influence,” Ahmed said after the approval. “I will work with the commission, our city leaders and our entire community to begin the process of healing.”

Ahmed, a Muslim, said he condemns Hamas and Hezbollah and their terrorist actions.

“They are (terrorists), exactly what the state department has said,” Ahmed said. “My feeling, they have committed acts of terrorism, and those acts need to be condemned.”

Ahmed believed City Council members would see it his way Tuesday night and confirm his nomination, and they did just after 6 p.m.

Leading a charge against Ahmed was Randy McDaniels of Act for America. McDaniels voiced concerns over Ahmed’s former job with the Council on American-Islamic Relations, which has been linked to terrorism.

“He’s a wolf in sheep’s clothing, in my personal opinion, and I’m going to say that,” McDaniels said. “This man is world renowned for his ties to Hamas Hezbollah’s support, and this is agreed with Mr. (Ray) Holt, who changed his vote to no.”

Ahmed said his character was being unfairly attacked. He was backed by the mayor, who reminded City Council members in e-mails that no criminal complaints exist against him.

“All of the things that have been alleged are caricatures of who I really am, but those who know me have given the exact opposite picture of those who have taken a slanderous position against me,” Ahmed said.