Part of the platform of North America Infidels (NAI), is to do exclusive reports on the threat of Islam in America. This one was handed to us….

Walking down the street today minding my own business, I just happened to came across another Muslim making a NYC street his own personal Mosque. 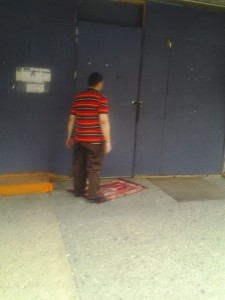 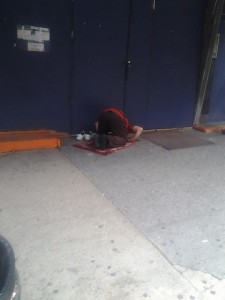 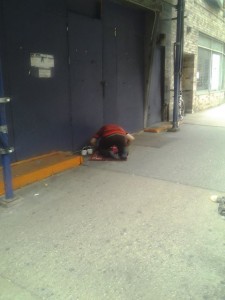 When he was finally done praying to his “God”, he slowly walked back to his halal food cart. 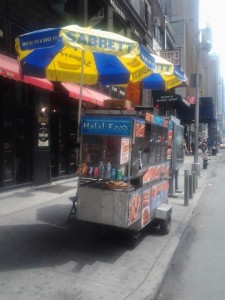 Whom do we have to blame for this insidious activity? None other than the  con man Mohammad himself.

I used to read the Qur’an with my father in the vestibule (before the door of the mosque). When I recited the ayat (verses) concerning prostration, he prostrated himself. I said to him: Father, do you prostrate yourself in the path? He said: I heard Abu Dharr saying: I asked the Messenger of Allah (may peace be upon him) about the mosque that was first set up on the earth. He said: Masjid Harim. I said: Then which next? He said: The Masjid al-Aqsa. I said: How long is the space of time between the two? He said: Forty years. He (then) further said: The earth is a mosque for you, so wherever you are at the time of prayer, pray there.

Besides him putting his anti-American ideology in our face, he is feeding the Islamic  beast by selling halal food. Do not feed the beast! Boycott all that is Islam!