Unfortunately I will fully admit that we infidels are losing the war with Islam, for now. There are numerous reasons that we are losing, and some of those factors are an incompetent and Muslim trained media, along with our universities being Islam influenced as well. But they all stem back to the main IslamoCON. The Islam is a religion of peace con. A statement that has set our great country back over a decade in the war with Islam.

Recently I was on Twitter and saw a Tweet from the US Embassy in Cairo. I sent them one about Islam being a threat, and ending Muslim immigration. The following was their response: 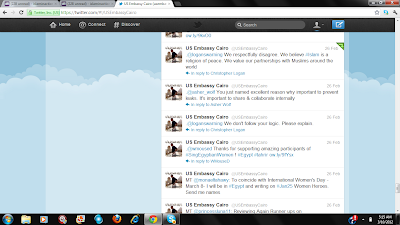 Now I know they are not going to criticize Islam while being in Egypt, but they did not have to respond at all and further what may be the greatest lie ever told.  I also understand that Muslims believe the forced “peace” of Islam is fine, but I do not. Forced “peace” is not “peace”. It is a life of fear, oppression, and violence. It is a life we infidels will never accept!

I believe the US Embassy meant what they said, and wants to remain in that fantasy land. When I asked them if they have ever read a Koran, they pulled a Harry Houdini on me. We will never win the war, until we name the enemy. That enemy is Islam!

← Why Mosques Should Be Shut Down
US Embassy in Cairo DISGRACES the US Flag! →