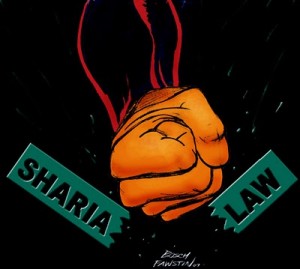 The great people of Oklahoma have followed in the footsteps of the people of Louisiana, and have banned Sharia from being used in their courts. The country is clearly is awakening to the internal threat of Islam, and I know this will be just the beginning of our attack on Sharia!

Oklahoma voters have approved a measure that would forbid judges from considering international law or Islamic law when deciding cases.

Republican Rex Duncan, the sponsor of the measure, called it a “pre-emptive strike” designed to close the door on activist judges “legislating from the bench or using international law or Sharia law.”

Members of the Muslim community called the question an attack on Islam and some of them said they are prepared to file a lawsuit challenging the measure.

Go ahead, file your lawsuit. You will only be exposing the threat of Islam in America even more, and what Sharia is. I appreciate the help.

Tweets that mention Oklahomans Ban Sharia From Being Used in Their Courts! | Loganswarning -- Topsy.com

[…] This post was mentioned on Twitter by AIC, Obama Scare. Obama Scare said: Oklahomans Ban Sharia From Being Used in Their Courts! http://j.mp/c07xBo  #tcot […]

This is great news!

We deserve some good news, now and then. 🙂

Send a clear message to the arselifters, it’s your way or the highway.

YES…. FINALLY someone awakens to the threat of the SUPREMACY AND SUBMISSION ideology…!

Banning Sharia should be adopted by all 50 states. Please don’t let what has happened to England happen here.

We here are working on it. Including you. 🙂

Excellent, about time someone took a stand!!

It’s about fucken time. It is time that we mount constant, consistant, unrelenting,driving attacks against fucken Muslims!!! No mercy for them; drive them down to the ground, force them, to a totally submissive, humble, acceptance to the American way of life’ even if we subject them them to a third class citizen…..Fuck them….OXNIN

I truly despise shria law and islam. It is the most Evil and dangerous threat to America and the world. There is nothing more important for Americans right now then to stop Islam and sharia in America.

How can I start a No Sharia Campaign in Nevada? When would the next election chance be then, 2012 or later?

Hi,
Are you part of any political groups there?

Tweets that mention Oklahomans Ban Sharia From Being Used in Their Courts! | Logan's Warning -- Topsy.com

When are these people going to understand that we see through them and will not accept their radical nonsense being pushed in our courts, towns, schools or anywhere else. They just do not seem to ‘get it’ that we know they are against this nation and we DO NOT stand for their radical nonsense or Koran…We are a Christian nation and that alone makes us total opposites in every manner..so folks, we ARE at war with Islam!! They want to destroy us…what do they think we are just going to lay down and let them mezmerise us with that load of nonsense they spew!? Not at all and it will come to WWIII if they think so!