I have one issue with this article besides the obvious one, of Muslims making demands on the school. I know that the school meant well but after almost 1400 years of jihad, and the bloody history between India and Islam, Muslims should of never been allowed in the school in the first place. They do not integrate,  they look to takeover with no concerns for the beliefs of anyone else. We should never forget this.

Hat tip to our friends over at Infidel Task Force.

Sanjos Metropolitan School has more then its share of problems

“The holistic information of the students is our aim and therefore we have selected a scenic and spacious site for the school, namely, the St. Joseph’s Cathedral premises on the Holloway road 300 meters north to the Tellicherry court junction providing the most fitting ambiance for fulfilling our dream. The Arabian Sea is just a stone’s throw away and the noises neither of the city nor the traffic disturb the tranquility of the school.” 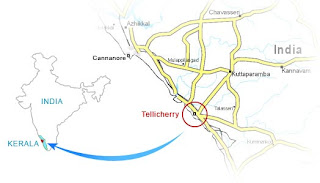 But its not all peace and tranquility.

Sanjos Metropolitan School has more then its share of problems. A beautiful, modern school dedicated to co-educational school providing education in a secular environment. The problem they are having is that the school has 40% muslim students and the muslims representing those students have started to make demands on the school. Demands that normally exceed the secular rule. Muslims are demanding that the girls be “allowed” to wear the Islamic headscarf. They demand that the male students be allowed to leave on Fridays for prayer. Now these are just for starters. We can only surmise, that if the school capitulates and agrees to these demands, then more requests for the Islamic students will be following shortly. We know that the demands just don’t stop. They keep coming.

Now this is a Catholic school. You would ask…”Why even allow muslim students?

Well…because Sanjos believes in imparting a quality education for the intellectual development of all the students who enroll in the school. Muslims included. For that they should be praised, not forced to change their operations, dress code, curriculum to accommodate a religious ideology.

” dear infidel friends we are very happy that at least someone is there to support us .kindly make aware all the christian schools to beware of these people and encourage them not to give in . the ursuline convent school kannur is also facing the same problem .” – sanjos

So there you have it Infidels. How would you react if Islam, in the United States , stared making demands at your son or daughters high school?….and then they kept the demands coming. And those demands started costing you money. Those new demands started infringing on your students rights…..think about it. Wouldn’t you want to know there was someone out there to give you support, maybe try to help you in some way? Of course, and that’s why we’re here.

22 comments for “India: Muslims Making Demands in a Catholic School”