For years I have been saying that all we need to do is look to the UK to see what is coming our way in regards to Islam. While things are worse across the pond, the Sharia movement in America is alive and kicking. The question is, what are we going to do about it?

Shariah Board of America cordially invites you to attend a Symposium on Seeratun Nabi (PBUH) on Friday, March 19, 2010.

Please note that the following programmes are being held at Shariah Board by
Hazrat Mufti Naval-ur-Rahman. Separate sitting arrangement for women is available. You are all requested to participate.

Here are some of the recent questions that have been submitted to the board.

Question_ID 16265:
Question_Text: I just converted to Islam in May of 2009, I was attending a private college for an Associates degree. When I learned that we’re not supposed to be involved in interest-bearing loans I dropped out b/c there was no other funding for me besides that. I only had 2 more quarters to go. I intended to just enroll at the community college to finish but the classes seem to always be full. I’m just wondering if riba is always bad, or if there are exceptions, such as paying for college, buying a house, or a car, etc.? Thank you.

Answer:
It is not permissible to be involved in an interest-bearing loan of any type. Infact, there is stern warning for a person involved in interest. Try to apply for the classes at the community college early so you can get a place before it becomes full. Also, search for grants and scholarships for which you may be eligible.

Question_ID 16257:
Question_Text: ASSALAM-O-ALAIKUM Respected Mufti Sahab! I have a very serious problem to discuss with you.My husband divorced me thrice (verbally) in one sitting just 4 months back.I am a working lady.I am very ashamed that I did not follow the rules of iddah strictly as prescribed by the Shariah. Though I did not indulge in any immoral and bad activity nor I contracted marriage with anybody during the whole period of iddah but one mistake I commited is that I couldn’t confine myself within the boundaries of my house and went outside during my iddah due to my job and some other domestic reasons for which I am feeling very guilty today as I have gone through some Islamic material (after the completion of my Iddah) about the rules of Iddah and found myself deviating the rules as prescribed by Islam.I repent and admit my sin and Pray to ALLAH to forgive me. The period of iddah is over.Now what is the way to correct the past mistake?I again say that i am very much ashamed of my act of not following the rules of iddah completely.But when my eyes opened , the time was over.I did tauba full heartedly and asked ALLAH for forgiveness.But my heart is very heavy due to this sin.I want to ask what is the kafara of this mistake?Should I obseve the iddah again following shariah’s rules or the time is over as I passed the period of iddah.One thing more,keeping in view the whole scenario, can I marry someone else?Is it permissible as my iddah has been passed contradictory to the rules of shariah?Will my second marriage be Halal islamically.Please guide me and also pray for me.

For those that do not know what iddah is.
Iddah:
In Islam, iddah or iddat (Arabic: العدة‎; period of waiting) is the period a woman must observe after the death of her spouse or after a divorce, during which she may not marry another man.[1] The period, three months after a divorce and four months and ten days after the death of a spouse, is calculated on the number of menses that a woman has. Iddah was intended to ensure that the male parent of any offspring produced after the cessation of a nikah would be known.

Answer:
It was incorrect for you to not adhere to the correct manner of observing the iddah. However, if three menstruation cycles have elapsed from the time the talaq was issued, then your iddah is over. Your second marriage will be valid Islamically.

Question_ID 16281:
Question_Text: Is it allowed for younger people to bow and do salaam to elders

The location of this board: 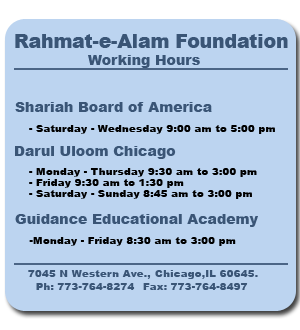 Sharia does not belong in America!

67 comments for “Welcome to Shariah Board of America”