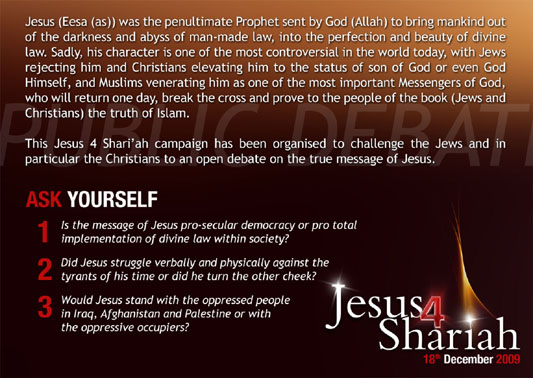 Sharia loving Muslims of the UK, will just not give up. Their new approach is to challenge Christian and Jews on whether the true message of Jesus was Islamic Law. According to the Islamic scriptures, Jesus will come back and destroy Christianity. Then he will place the world under Islamic Law. Muslims are going to be in for the shock of their lives!

Jesus (Eesa (as)) was the penultimate Prophet sent by God (Allah) to bring mankind out of the darkness and hegemony of man-made law, into the perfection and beauty of divine law.

Sadly, his character is one of the most controversial in the world today, with Jews rejecting him and Christians elevating him to the blasphemous status of son of God or even God Himself; Muslims on the other hand venerate him as one of the most important Messengers of God, who will return one day, break the cross and prove to the People of the Book (Jews and Christians) the truth of Islam.

In light of this, Islam4UK, a platform for Al-Muhajiroun, have decided to launch a unique campaign in the run up to Christmas, challenging Jews and in particular Christians to an open debate on the true message of Jesus.

This event has been booked for 18th December 2009, precisely one week before Christmas Day and we hereby call out to all Christian leaders in the UK to come forward and defend their claim to Jesus on this special day, if they sincerely believe they are on the truth.

If you or anyone you know are interested in participating in the debate and would like to know more about arrangements for the day please contact Abu Yahya on 07961577221.

You will also witness several articles as a precursor to this event, outlining the life of Jesus (peace be upon him) and his mission, in light of the Qur’an and Sunnah. Indeed, asMuslims we believe that Jesus was a Muslim, and moreover that if he were alive today, that he would reject the evil bureaucracy of man-made law and wholeheartedly embrace the divine law (Shari’ah)of the Final Messenger sent to the whole of mankind, Muhammad (saw).