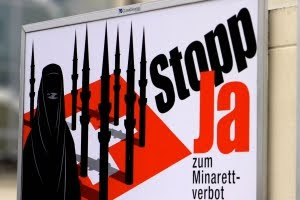 Just this morning I posted about the brave Christians and Jews in Nashville, that stepped up their anti-Islam message. They obviously understand the threat that Islam brings to Western civilization. Today, just days after the Swiss voted against Mosque minarets, Christians (Vatican included) and Jews,  errr…cowards, are coming out in support of the Islamic community and against the ban.

I am just curious as to what part of Islam do liberal Jews like best? Is it this verse?
Book 041, Number 6985:

For the Islamic loving Vatican that has even supported Sharia banking, is this what you guys respect about Islam?

BUDAPEST (JTA) — Swiss voters may have been taking aim at Islam, but Jewish and Catholic leaders are among those crying foul.

Jewish organizations have joined Muslims, the Vatican and other groups in warning that a Swiss referendum banning the construction of mosque minarets could fuel hatred, jeopardize religious freedom and further polarize an already divided society.

“Discriminatory laws like a ban on minarets are likely to alienate rather than ease integration,” the Board of Deputies of British Jews said in a statement following the Nov. 29 vote. “They also give succor to the unacceptable politics of unlimited hate being peddled around Europe by right-wing extremists.”

Called by the far-right Swiss People’s Party — the country’s largest political party — the referendum won the support of nearly 58 percent of voters. The result, which stunned many observers, mandates a constitutional ban on the construction of minarets, or prayer towers, on newly built mosques.

The referendum is the latest round in a series of ongoing debates and controversies over how to deal with a growing Muslim population in Europe. In France, there have been sharp debates over whether Muslim women should be allowed to wear veils in public schools. And in the past few years, anti-immigrant protesters have demonstrated against the building of mosques in Germany, Italy and elsewhere in Western Europe.

Posters backing the Swiss referendum had blatantly played on fears of Islamist extremism. Some showed a sinister, black-veiled figure in front of black minarets arrayed to look like missiles rising out of a Swiss flag.

Martin Baltisser, the general secretary of the Swiss People’s Party, told the BBC, “This was a vote against minarets as symbols of Islamic power.”

About 400,000 Muslims live in Switzerland in a population of 7.5 million. Four mosques in the country have minarets.

Many Muslims in Switzerland are refugees from the Yugoslav wars in the 1990s. During those wars, Orthodox Serb and Catholic Croat fighters deliberately targeted hundreds of mosques for destruction.

In a joint statement ahead of the vote, the two main Swiss Jewish umbrella groups opposed the measure.

“Precisely because the Jewish community has firsthand experience of discrimination, it is committed to active opposition to discrimination and to action in favor of religious freedom and peaceful relations between the religions,” the two Swiss Jewish groups declared.

Swiss Jewry, the statement said, “takes seriously the fears of the population that extremist ideas could be disseminated in Switzerland. But banning minarets is no solution — it only creates in Muslims in Switzerland a sense of alienation and discrimination.”

The results of the referendum drew widespread criticism from the Vatican, Muslim leaders, the United Nations and other political and religious bodies around the world.

Jewish criticism focused on concern that the crackdown on Muslims could foster extremism and harm efforts to integrate Muslim communities. But Jewish leaders also warned of possible repercussions for Jews and other minorities.

“For the Swiss People’s Party, as for all far-right parties in Europe, any group that is different in terms of its appearance or its language or its cultural or religious traditions is regarded as a target,” said David Harris, the executive director of the American Jewish Committee. “We stand firmly against these rabble-rousing politics in the name of pluralism and democracy.”

The Anti-Defamation League slammed the referendum as “a populist political campaign of religious intolerance.”

“This is not the first time a Swiss popular vote has been used to promote religious intolerance,” the ADL said in a statement. “A century ago, a Swiss referendum banned Jewish ritual slaughter in an attempt to drive out its Jewish population. We share the … concern that those who initiated the anti-minaret campaign could try to further erode religious freedom through similar means.”

France’s Chief Rabbi Gilles Bernheim called on leaders of “all religions” to work for “dialogue and openness.”

Rabbi, please provide some evidence that interfaith dialogue is working. Because I can provide plenty that easily proves that it is not.