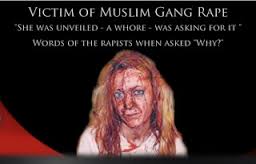 For years I have been warning my readers to look to the UK to see what is coming our way in regards to Islam. I have also been warning people of the vile actions that are legal under Islam. One of which is the taking of sex slaves, and to those with morals that is rape.

Unfortunately the rape jihad is a plague that has struck the UK!

The problem is a severe threat now that will only get worse as the Muslim population rises across the West. It is past time to take a stand. It is past time Islam is fought. It is time to join the Christian Defence League and save your future generations from the plague of Islam! You can do so by clicking HERE.

← North American Infidels Exclusive: NY Muslims Bully Church and Residency of Fathers!
Washington Muslim: Logan, you Will Drown in Your own Blood! →