In this update about tomorrow’s UK Sharia march, we see that Muslims there are getting more brazen. 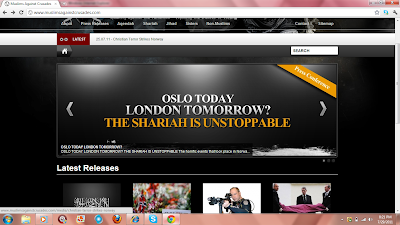 Besides getting more brazen they are exploiting the recent mass murders in Norway.

The horrific events that took place in Norway on 22nd July 2011 by Christian terrorist Anders Behring Breivik has unequivocally changed the political landscape of Europe; the emergence of anti-Islamic, right wing groups with sinister motives against the Muslim community, has forced Muslims living in Europe to seriously contemplate about their role living amongst such a threat.

In light of this as well as the Islamic Emirates Project that seeks to fragment large sections of Britain into Muslim enclaves operating under Shariah law, Muslims Against Crusades have organised a press conference precisely one week after the Oslo bombings, to declare the beginning of a shift in Europe that will see high profile campaigns firmly asserting Islam’s presence in the West and the unstoppable resurgence of a Muslim fifth column determined to see the domination of the Shariah worldwide.

Special guest speakers will include Anjem Choudary and Abu Izzadeen.

Time: 10am
For further information please contact: 07956 600 569 or e-mail us at info@muslimsagainstcrusades.com

As you can see IslamoPUNK Anjem Choudary has no scruples, and continues to call Anders Behring Breivik a “Christian”. Terrorist yes, Christian no.

But makes no mention of the fact that he respects Mohammad, a self-professed terrorist.

We are at war with Islam and we need to do a better job of getting the word out. I encourage all readers to share these articles, by clicking on some of the share icons below. Thanks!