Today is the day the Muslim Public Affairs Council (MPAC) went to Capitol Hill, to speak out against anti-Sharia legislation. What I also noticed today is that the New Jersey branch of the AlMaghrib Institute is now signing up students to teach them about Sharia Law! 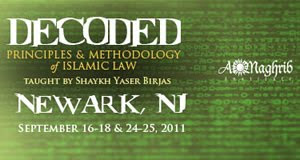 AlMaghrib is not the only organization in America teaching Sharia Law. Some others are the Assembly of Muslim Jurists of America (AMJA), the Islamic Circle of North America (ICNA), and Zaytuna College, a Sharia college which is located in Berkeley California. Those three examples are besides the Mosques in America that are preaching for Sharia as well.

Learning about the characteristics and manners of the person we love the most and to see it being implemented right in front of us by our Shayke Yasir Birjas was something that can not be described.

The history of the development of Islamic law begins with the revelation of Qur’an. Qur’an is not a code of law but it contains several legal principles and injections dealing with the following subjects: ibadat (rituals), war and peace, marriage divorce, successions, commercial transactions, and penal laws.
– Muhammad Khalid Masud

“[Sh. Yasir Birjas] provided all types of learning materials. He was very interesting. We felt as though we were in a movie. SubhanAllah. As a professional teacher, I was amazed as to how he utilized every teaching technique and kept us wanting more and more

DON’T MISS OUT ON THE ADVANTAGES OF THE ISLAMIC LEGAL THEORY IN YOUR LIFE!

To make matters worse, this course is being taught at the New Jersey Institute of Technology (NJIT). The school can be reached HERE.