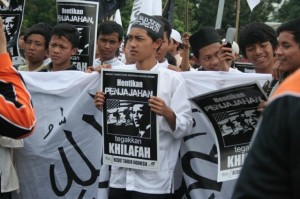 This is very similar to the article I just posted about the pro-Sharia rallies that recently took place across Pakistan. The pro-Sharia organization Hizb ut-Tahrir which held the rallies across Pakistan, is making their presence felt in Indonesia as well. The Sharia movement is getting stronger and stronger, and the Islamic world is uniting against us, so the less Muslims that come here the better. Please take the time to sign the end Muslim immigration petition. It can be found HERE.

Jakarta- Around 15 thousand Hizb ut-Tahrir protesters joined in a protest in front of the State Palace in Jakarta on Sunday 7th November. The protesters took a long march starting from the Presidential Palace to the front of the US Embassy, a symbol of the head imperialist country in the world. Along the way, they chanted ‘Reject, Reject, Reject Obama, Reject Obama Right Now’.

The committee of the event described the protest as a form of concern and solidarity with fellow Muslims around the world. Besides, it is also a form of solidarity to the fellow brothers and sisters affected by the disasters in the country. Therefore, besides rejecting the arrival of Obama, this action is also intended to raise funds for the disaster victims.

HTI spokesman Ismail Yusanto opened the protest by saying that the action is one of the obligations of ‘enjoining good and forbid evil’. “This is a concern of this country as well as a form of love to this country, ” he said.

The disaster, he said, should be a concern. But above all, Muslims should not forget the larger disaster which is the solid position of imperialism in Indonesia. He then asked the participants to donate funds for the disaster victims of the eruption of Merapi Volcano and the tsunami in Mentawai Island. Some big pouches were then distributed to fill with money. Until the end of the event, more than 62 million rupiah (approx. $7000) in cash was collected for the disaster victims.

The rejection of Obama’s arrival in Indonesia and the fund-raising activities by Hizb ut-Tahrir were done in various cities across Indonesia. Besides, Hizb ut-Tahrir has also sent a task force of volunteers as a part of the team of Hizb ut-Tahrir Disaster Response to some disaster areas to help the brothers and sisters who are suffering. (MJ / mediaumat.com) 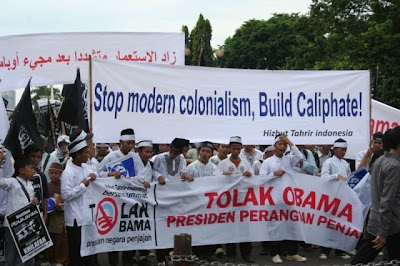 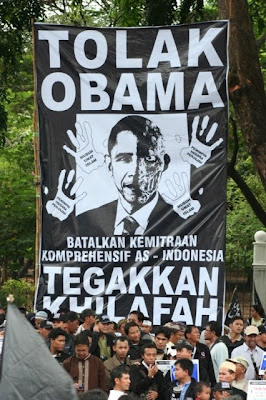 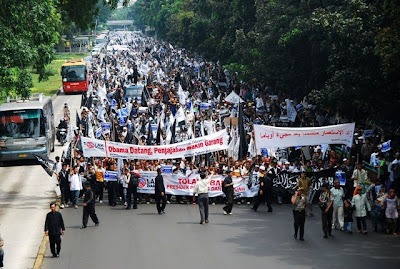 17 comments for “Indonesia: 15,000 hit the Streets to Protest Against Obama, and Call for Islamic Law”