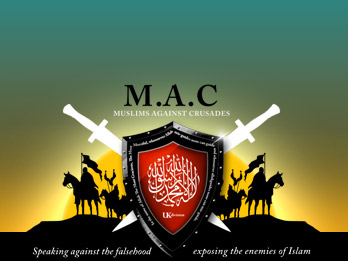 Here we go again, another pro-Islamic rally is going to take place tomorrow in the UK . The Muslims Against the Crusades organization is set to protest against the “filthy” soldiers of the UK. Once again we see how Islam destroys from within.

Venue Date & Time
Outside
Exhibition Road
Kensington, SW7
11th November 2010
10:00am – 12:00pm
On 11th November 2010, commonwealth countries will join together in a moment of silence to commemorate the sacrifices of their civilians and armed forces during times of war. For over a century these events have gone uninterrupted, as millions of people continue to reflect on the casualties of modern warfare.

Unfortunately, the bitter reality of Remembrance Day is that the majority of people (who participate in it) are blissfully unaware of the hidden truths behind this very distasteful event. Put simply, Remembrance Day is a symbol of imperialism and everything that is wrong with democracy and man-made law.

As Muslims, we can poignantly remember the victims of (British) military intervention, the bullets fired and the bombs dropped, the lands occupied and the resources stolen and in light of this find it very difficult to remember the perpetrators of such crimes without much anger and hostility.

The British military are currently at the forefront of some of the harshest campaigns against Islam and Muslims, and furthermore have played a crucial role in cementing economic and strategic interests that rob large Muslim populations of vital resources.

In light of this, Muslims against Crusades have organised an emergency demonstration, to highlight these injustices and to furthermore ensure that on the 11th hour of the 11th day of the 11th month, this message is heard loudly and clearly.

105 comments for “UK: “Muslims Against Crusades” to Protest Against British Troops~ Video”