Most of us reading here know that Muslims and their leftist supporters are not going to stop trying to shove Islam down our throats. Well non-Muslims are starting to push back, and here is a victory for the good guys! 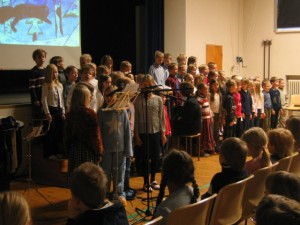 “It went off last night without a hitch,” Thompson said. “Several families thought it was a nice program.”

School officials removed a phrase saying “Allah is God” after the American Family Association launched a protest of the program on its electronic newsletter.

The change was made, Thompson said, because no other deities were directly named in the program.

But one state Muslim leader said the school’s decision to remove the word Allah was far from inclusive.

“It’s unfortunate if that was removed from the program just because of Islamophobic feelings,” said Shariq Siddiqui, executive director of the Muslim Alliance of Indiana. “Schools are a place where we should learn more about each other rather than exclude each other based on stereotypes and misconceptions.”

Siddiqui said “Allah” is the Arabic word for God and is used by Jews, Christians and others in Arabic-speaking nations.

In the week before the program, the principal said, about 30 people called with concerns — and only four of the complaints came from local families. Thompson said many callers were appeased when they heard the program’s purpose and scope.

Laura Mollo, 26, Peru, called several times over concerns about children saying, “Allah is God,” though she has no connection to the school. She said that as a Christian, she had to protest because she believes it’s wrong to praise another religion’s God.

“I highly doubt all of those children are Muslim, and some of my brothers and sisters of Christ are there.”

Hey Shariq, the misconception excuse is worn out. Islam allows lying, rape, and what non-Muslims would consider murder. Anytime that you want to challenge me on this, just let me know.

21 comments for “Christian Org. Fights Back Against 2nd Graders Being Forced to Sing Allah is God!”