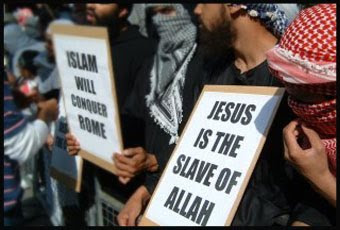 Don’t get mad at me that is not what I believe, but the pro-Sharia Muslims of Islam4UK are looking top stir things up again. Just the other day I posted about their upcoming Jesus 4 Sharia debate. They are challenging UK Christian leaders on the issue of who Jesus really was. Is Jesus really the man as Christians know him or will he come back as a Muslim and destroy Christianity as taught in Islam? I know where I stand.

There is a lot of hussle and bussle all around us, many of us have been shopping, singing, decorating the houses, writing out cards, preparing food for days of celebration and wrapping up presents. But how many of us know the true meaning of the religion that Jesus may the peace and blessings be upon him brought to a land, to a people many thousands of miles away? What was the Jihad (struggle) of Jesus may god bless him?

In your youth you probably attended bible classes, the schools end of year Christmas party was something to look forward to, you may have been a member of the carol team or the local choir group. Festive and Biblical stories were repeated annually, plays were conducted and watched with keen interest from parents, nativity scenes mimicked scenarios dating back more than 2 millenniums ago.

Compare yourself to then and now, childhood memories versus adult reality, adolescent emotions of the past against societal norms of the present. In a few lines we would like to fill a religious void with some wonderful excerpts of the pure and authentic teachings of the great personality of the honourable and noble Jesus.

Jesus may the peace and blessings be upon him will return back to earth victoriously:

Gods Apostle said, “By Him in Whose Hands my soul is surely the son of Mary (Jesus) will soon descend amongst you and will judge mankind justly (as a righteous ruler).” [Recorded in Saheeh Bukhari]

Jesus will destroy polytheism and implement the laws of God on earth:

The last and final Messenger said, “There is no Prophet between me and him, that is, Jesus. He will descent (to the earth). When you see him, recognise him: a man of medium height, reddish fair, wearing two light yellow garments, looking as if drops were falling down from his head though it will not be wet. He will fight the people for the cause of Islam (i.e. the complete submission to the will of Allah). He will break the cross, kill the swine and abolish Jizyah (a tax levied on non-Muslims living under the Shariah). Allah will perish all religions except Islam. He (Jesus) will destroy the Antichrist and will live on the earth for forty years and then he will die. The Muslims will pray over him.” [Recorded in Sunan of Abu Dawood]

Jesus may the peace and blessings be upon him will live according to the final laws of God:

I heard the Messenger of God (peace be upon him) say, “Jesus son of Mary would then descend and their (Muslims) commander would invite him to come and lead them in prayer but he would say, “No, some amongst you are commanders over some (amongst you). This is the honour from Allah for this Ummah (Muslim Nation).”” [Recorded in Saheeh Muslim]

Jesus may the peace and blessings be upon him never died:

Jesus may the peace and blessings be upon him is a Prophet of God:

“And there is none of the people of the Scripture (Jews and Christians), but must believe in him (Jesus as only a Messenger of God, a human being), before his death. And on the Day of Resurrection, he (Jesus) will be a witness against them.” [EMQ 4:158]

Jesus is related to Muhammad may the peace and blessings of Allah be upon them both:

Allah’s Apostle said, “Both in this world and in the hereafter, I am the nearest of all the people to Jesus the son of Mary. The Prophets are paternal brothers; their mothers are different, but their religion is one.” [Bukhari]

Oh people believe in all the Prophets of Allah (SWT) and you will be honoured with twice the reward:

The Last and Final Messenger Muhammad (saw) said, “If a man believes in Jesus and then believes in me (Muhammad), he will get a double reward.” [Recorded in Saheeh Bukhari]

Jesus will be questioned on the Day of Judgement:

“And (remember) when Allah will say (on the Day of Resurrection) “Oh Jesus son of Mary! Did you say to men Worship me and my mother as two gods besides Allah?” He (Jesus) will say, “Glorified are You! It was not for me to say what I had no right (to say). Had I said such a thing, You would surely have known it.”“ [EMQ – English Meaning of the Quran 5:116]

We invite all the Christian denominations to a common ground:

“Oh people of the Scripture (Jews, Christians)! Come to a word that is just between us and you, that we worship none but Allah (Alone) and that we associate no partners with Him and that none of us shall take others as lords besides Allah. Then if they turn away, say bear witness that we are Muslims (those who submit to the will of Allah).“ [EMQ 3:64]

Want to participate in the Big Debate?

If you are a representative of a Christian group and would like to participate in the Big Debate: Jesus4Shariah, please call: 07961 577 221

65 comments for “Jesus is a Slave to Islam”