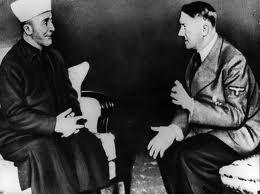 As America continues to raise its voice louder against the threat of Islam, I see more and more Jewish people taking a stand with Islam. They even have gone as far as to call those that speak out against Islam “Nazis”. They attempt to draw an analogy between the outcry against Islam and the Nazis’ rant against the Jews back in the 1930s and ’40s. Their comparison falls far short from the truth. The reality is that Islam and Nazism are what are comparable! Reason being? There is NO mistaking that they both preach a profound hatred of Jews!

Going back in time to the days of Mohammad, we can see the utter disdain he had for Jews.

From the ahadith. The words and deeds of Mohammad.
Bukhari Hadith Volume 1, Book 8, Number 427:
Narrated ‘Aisha and ‘Abdullah bin ‘Abbas:
When the last moment of the life of Allah’s Apostle came he started putting his ‘Khamisa’ on his face and when he felt hot and short of breath he took it off his face and said, “May Allah curse the Jews and Christians for they built the places of worship at the graves of their Prophets.” The Prophet was warning (Muslims) of what those had done.

Unfortunately, like Hitler, Mohammad was not content with just cursing them. He warned his followers to not even befriend any Jews.

(Yusuf Ai was the translator) Koran verse 005.051
YUSUFALI: O ye who believe! take not the Jews and the Christians for your friends and protectors: They are but friends and protectors to each other. And he amongst you that turns to them (for friendship) is of them. Verily Allah guideth not a people unjust.

Simply not befriending Jews was not the extent of Mohammad’s anti-Semitism. Not by a long shot…

Now, let’s move forward in time to the days of hideous Hitler.

…
-Adolf Hitler (Mein Kampf) the personification of the devil as the symbol of all evil assumes the living shape of the Jew.

And so he [the Jew] advances on his fatal road until another force comes forth to oppose him, and in a mighty struggle hurls the heaven-stormer back to Lucifer. Germany is today the next great war aim of Bolshevism. It requires all the force of a young missionary idea to raise our people up again, to free them from the snares of this international serpent…
-Adolf Hitler (Mein Kampf)

One important fact that many non-Muslims do not know about the Holocaust was that Hitler had a helping hand from his friend Muhammed Amin al-Husseini, the Mufti of Jerusalem. That’s right; al-Husseini had been fighting Jews for nearly 2 decades by that time.

From 1922 through 1928 the relationship between Jews and Arabs in Palestine was relatively peaceful. However, in late 1928 a new phase of violence began with minor disputes between Jews and Arabs about the right of Jews to pray at the Western Wall (Kotel) in Jerusalem. These arguments led to an outbreak of Arab violence in August 1929 when Haj Amin al-Husseini, Mufti of Jerusalem, fomented Arab hatred by accusing the Jews of endangering the mosques and other sites holy to Islam. Observers heard Husseini issue the call: Itback al-Yahud “Slaughter the Jews!”

The homicidal Mufti was not done there. He was an integral part of Hitler’s movement.

The Mufti was one of the initiators of the systematic extermination of European Jewry. He had been instrumental as a collaborator and adviser of Eichmann and Himmler in the execution of this plan. … He was one of Eichmann’s best friends and had constantly incited him to accelerate the extermination measures. I heard him say, accompanied by Eichmann, he had visited incognito the gas chamber of Auschwitz.

Does anyone see the commonality yet?

Unfortunately, anti-Semitism did not die with Mohammad, nor with al-Husseini, nor with Hitler. Anti-Semitism continues to rise alarmingly across the West.

This video from the UK shows a masked person who is supposed to be a Jew. A Jew eating babies. The blood libel against Jews goes back centuries and is obviously a ridiculous and false accusation.

Not only is it on the streets, it is in campuses across the West. Students are being indoctrinated with the Islamic hatred of Jews.

The Palestine~Israel conflict is just one front on Islam’s war against the Jews. No matter how much Israel appeases them, the conflict will NEVER end. Why not? Because the Islamic scriptures call for Muslims to fight and kill Jews to reach their Judgment Day.

Whether the message came from Mohammad or from Hitler, the mandate was one and the same: Destroy the Jews! 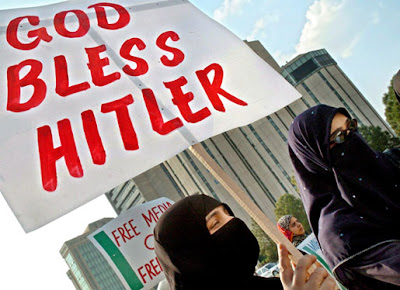 Hence today I believe that I am acting in accordance with the will of the Almighty Creator: ‘by defending myself against the Jew, I am fighting for the work of the Lord.’

Those that speak out against Islam are not the problem. Quite conversely, it’s the people who are silent who are the problem! They are the same type of people who remained silent during the lead up to the Holocaust. In this extremely grave situation, the voices against Islam are attempting to stave off the Holocaust of us all, not only the Jews. As for the Muslims, it does not have to be all of them who are the enemy, just like it was not all Germans. However, the end game is the same. A Jew supporting Islam is the equivalent of a Jew supporting Nazism. Is that where you stand? If not for yourself, I appeal to you to take a stand for your future generations. WE are the last line of defense!